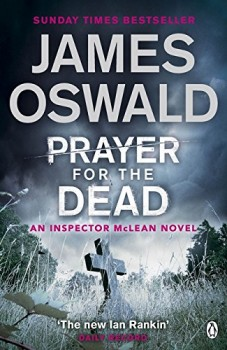 DI Tony McLean struggles to find a link between a series of bizarre killings in Edinburgh.

Prayer for the Dead, the fifth book in James Oswald’s series about Edinburgh detective, DI Tony McLean, a magnet both for trouble and weird happenings, gets off to a suitably creepy start beneath the streets and the tension continues to mount from there.

Underground, in the man-made caverns and tunnels of Gilmerton Cove, a mysterious ritual ends with a man’s death. The archaeologists working down there get an unexpected shock when they find his body, the walls of the chamber around him daubed with Masonic symbols drawn in the dead man’s blood.

When journalist Ben Stevenson goes missing, one of his colleagues, McLean’s old nemesis, Jo Dalgleish, a woman he wouldn’t waste spit on if she was on fire, wants McLean to look into his disappearance. It doesn’t take long to connect this with the body of the murder victim found in Gilmerton Cove and McLean is thrown into an uneasy alliance with the reporter with the reluctant sanction of his boss, the long-suffering Detective Superintendent Duguid.

With McLean’s team making little headway with the Gilmerton Cove killing, matters are complicated further when a woman’s naked body is found elsewhere in the city, her throat cut from left to right, the same as Ben Stevenson’s. McLean is certain that the two murders are connected, but he has a hard job convincing some of his colleagues of that, and Duguid is drawn into the role of referee, as well as trying to convince McLean that his beloved Masons don’t actually go around slitting people’s throats and daubing their blood on walls.

As the series progresses, I find I’m liking Duguid more and more. In the early books he was very much cast in the role of antagonist, but now he’s becoming more of an occasional, reluctant ally. The man might be a desk-bound, over-promoted copper marking time until retirement, but he’s also got a stubborn streak a mile wide that occasionally puts him on the side of the angels, almost by accident.

McLean’s life is complicated by a couple of seemingly shady property developers who want him to sell his share in the fire-damaged block of flats that used to be his home. McLean’s a stubborn bugger as well, and he’s got no intention of selling. He’s also not the only one who’s under pressure on the property front, when the transgender fortune teller Madame Rose arrives on his doorstep, wanting a safe haven for herself and her cats, as someone is trying to pressurise her out of her home as well.

As ever, Oswald has a light touch with the supernatural elements of his story. McLean is very much a sceptic, but enough weird shit has happened in his vicinity to ensure he keeps an open mind. This is a series where you can read as much or as little as you like into those elements of the book. I’m happy to have a side-order of the unexplained and distinctly creepy alongside a main course of solid police procedural stuff. It gives an added dimension to a very engaging and entertaining series. There’s certainly nothing run of the mill about either Oswald’s characters or his plots, and if he can keep up this standard, I’ll be very happy.

Also, as a caver of many years standing, it’s always nice when something central to a story takes place underground! I’m now trying to work out how I can fit in a trip to Gilmerton Cove.

For anyone interested in visiting Gilmerton Cove, you can find more information on their website: http://www.gilmertoncove.org.uk/. The Cove is open by appointment and prior booking is essential.

Thanks to www.crimereview.co.uk and UBSS for permission to reproduce this review.