When Rick Stanton and John Volanthen surfaced in Chamber 3 of Tham Luang Cave on day 6 of the rescue to find four people waiting for them they first thought they’d somehow found the boys from the trapped Wild Boar team. In fact they’d discovered four lost Thai rescuers who had been trapped by the rising floodwaters. In the chaos of the early days of the rescue the absence of the men had been unreported and so had not been noticed by the Thai authorities or the outside world. What followed was a dramatic and unparalleled “snatch” rescue mission perfectly conceived and executed as they dived the four men through three sumps to safety.

Rick Stanton recounted the story of the rescue in a detailed one and half hour long lecture at Hidden Earth, held at Churchill Academy and Sixth Form in North Somerset, an annual conference for cavers organised by the the British Cave Research Association and the British Caving Association. Many other details of the rescue were also explained to a packed audience.

The Tham Luang rescue began on Saturday June 23 after the Wild Boars team were reported missing and their bikes were found at the cave entrance. On day two searchers had penetrated around 1500m into the cave to the Sam Yaek junction, some way past Chamber 3 which would eventually become the site of the Thai Navy Seal dive base. The British Cave Rescue Council received a request from Thai government on Tuesday June 26 and by late that evening a three-man team, Rick Stanton, John Volanthen and Rob Harper were en route to Bangkok on a Thai Airways flight. By this time heavy rain had prevented further searching. They arrived at the rescue site the next day and made a reconnaissance dive towards chamber 3, which was now cut off from the cave entrance. 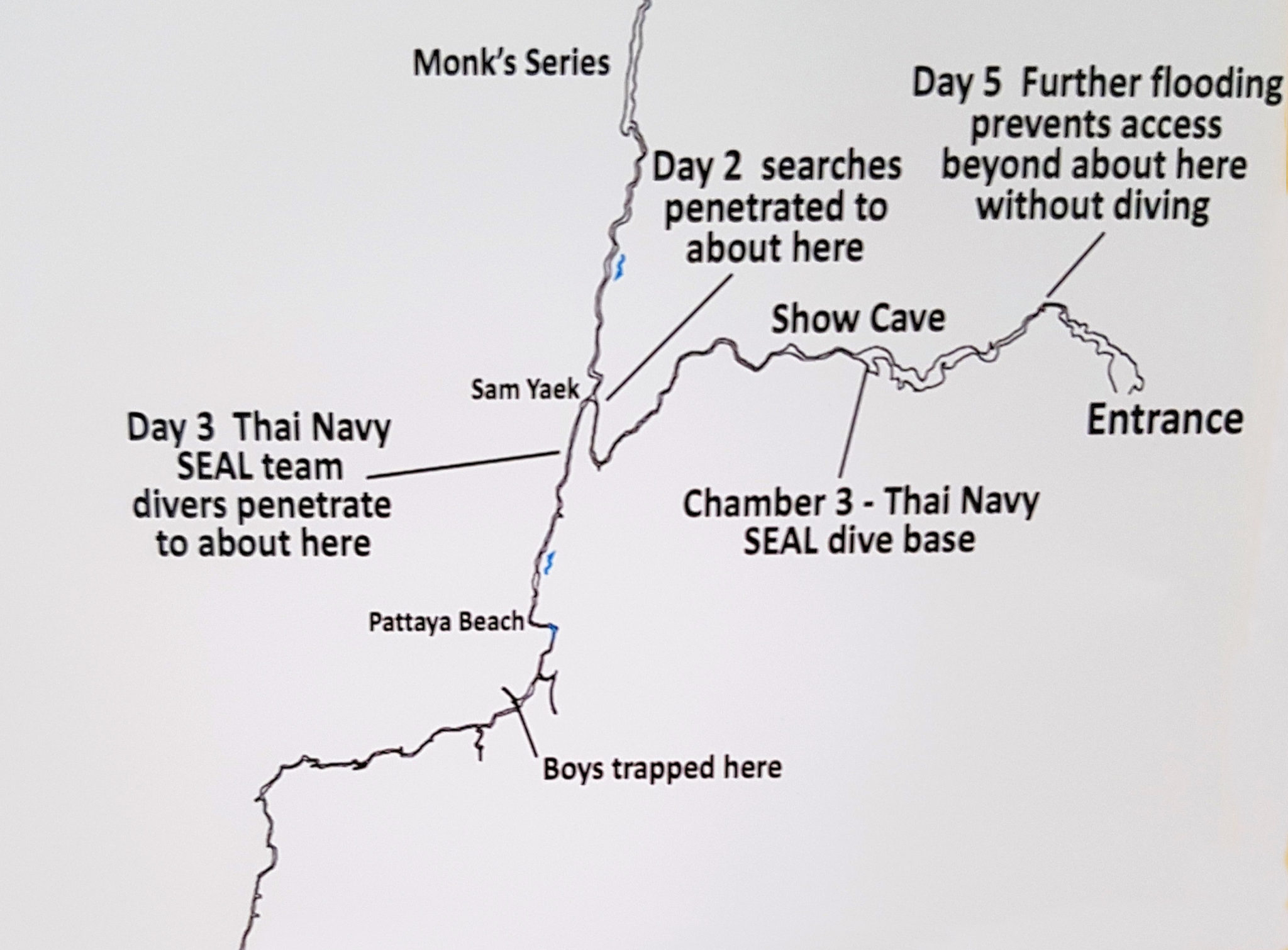 On the following day, Thursday June 28 and day six of the rescue, Rick and John dived the three short sumps to chamber 3. As they surfaced they realised there were people in the chamber. Hoping they’d found the missing boys they soon realised these men were older, it transpired they were Thai water company employees who had not been reported missing and who had been trapped for around twenty four hours, possibly longer. Their situation was desperate, conditions were worsening quickly, there was no communication to the surface and no one, least of all the two divers, knew at at that stage whether Chamber 3 would flood completely.

In the cave the water was still rising and although the chamber is in part of the show cave Rick described the diving conditions heading back to the cave entrance as appalling. As well as low visibility which was to be expected in the flood water the site had become contaminated with diesel after a pump installed inside the cave had been flooded. As they stood in the sumps the muddy water was churning, swirling and eddying around them. The four men were not divers, or even cavers. The two British divers had only their personal equipment, there was nothing spare for the four to use, and no time to return to the entrance for help, more equipment or more divers.

The two found themselves in a completely unexpected situation and quickly devised a plan to relay the four men through the three sumps and around 700m of “open” passage back to the cave entrance. Rick explained there were some positives, the sumps were shallow, under 5m deep, fairly short at around 10m long, the water was fairly warm and the four, though scared, were very keen to get out!

The plan was fairly simple – both divers were wearing twin side-mounted cylinders and therefore had two demand valves. Each of the two would then take it in turns and relay rescue each of the workers through the sumps, one at a time, utilising the mask from the other diver. The group would then be escorted back through the cave to the next sump where the process would be repeated. In any dive rescue there is always a risk that the victim will panic, and possibly harm the rescuer or damage his or her equipment.

Despite the risks the two divers decided to proceed. It is hard to imagine how disorientating it must be for a non-diver to be suddenly immersed in murky brown, fast flowing cave water, wearing unfamiliar equipment, without a wetsuit, and at one point this was illustrated when Rick experienced a minor problem with his kit just as he submerged at the start of a sump and he had to surface again. His new dive “partner” surfaced with him, jumping out of the water and began running along the passage in the direction he thought his friends must have taken, until Rick stopped him and explained he had to do it all over again. Fortunately eventually the “snatch” rescue went as planned and all four men were safely returned to the surface. Rick had previously been involved in the rescue of six cavers in Mexico, and in terms of numbers the rescue of the water company employees ranked second to that – for the next twelve days at least.

Rick highlighted the contributions of overseas divers, including Australians Doctor Richard Harris and veterinary surgeon Craig Challen and Belgian diver Ben Reymenants as well as contributions from the surface team, notably Vernon Unsworth. Vernon’s in-depth knowledge of the cave meant he played a key part in the overall rescue, as well as persuading the Thai authorities to contact British divers, his years of observations of flooding in the cave proving invaluable. At one point, when several hundred rescuers were working in the show cave section he warned that section of cave would flood within three hours, and advised evacuation. Vernon also helped persuade the authorities that the flooding in the cave would take much longer to drop naturally after the end of the monsoon season, and explained that it could be as late as January before the area the boys were trapped in might reopen.

Rick also went on to explain that it took time to build the credibility of the divers with the Thai authorities, understandably as they were being bombarded by suggestions and offers of help from all sides. Both Vernon’s advice and the rescue of the four trapped rescuers played a big part in building the credibility of the dive team, and marked key moments in the process that eventually as we all now know led to the successful dives to free the Wild Boars.

Rick was then joined for a question and answer session by fellow divers John Volanthen, Chris Jewell, Connor Roe and Josh Bratchley. At the end of the lecture Rick received a two-minute standing ovation – a chance for cavers to show their appreciation for their efforts.

Les Williams, Chairman of the British Caving Association, commenting today on the rescue of the Thai rescuers, said: “It’s one of the most remarkable aspects of this whole event that such an amazing thing was a mere side show that never even made the press.”

When we remember and recognise the work of the British cave divers and cave divers from other countries in Tham Luang we should recognise not only did they save the thirteen – between them they also saved seventeen lives.

You can also read our backroom story of how the British Cave diving effort was organised.

This article was revised slightly for technical accuracy on 26th September 2018.