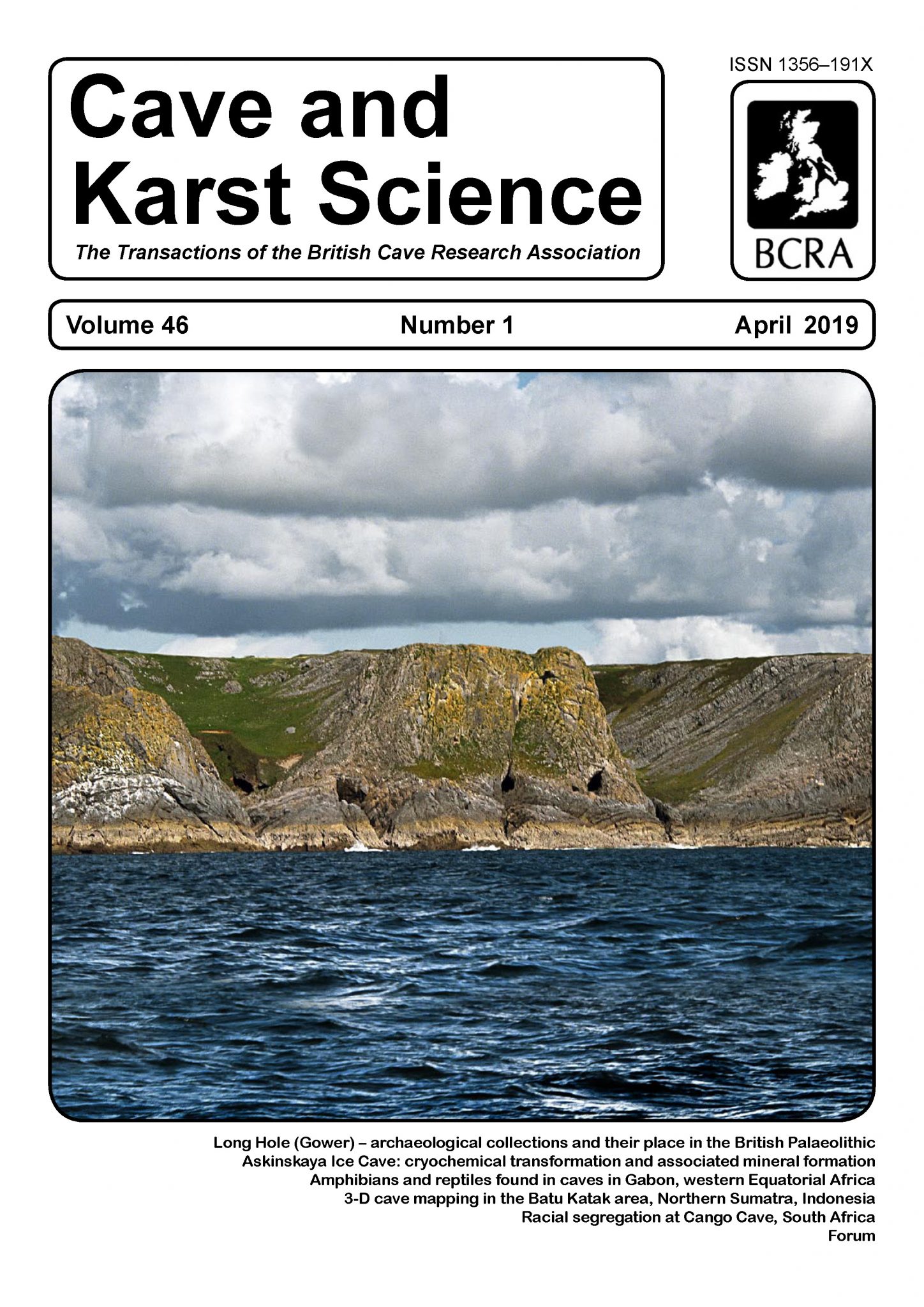 Reports on amphibians and reptiles in caves, 3-D cave mapping, and racial segregation in a South African cave are among the features in the April issue of Cave and Karst Science.

There are five main articles in Volume 46, Number 1, as well as some shorter pieces in the Forum section. The first is a report on amphibians and reptiles found in caves in Gabon, western Equatorial Africa, by Olivier S G Pauwels, Piero Carlino, Laurent Chirio, David R Daversa, Josiane Lips, Richard Oslisly and Olivier Testa. They provide an update of current knowledge of the herpetofauna and batrachofauna recorded from the caves. No systematic field survey of reptiles and amphibians in Gabonese cave environments has yet been made, and data is available for only 19 cave complexes. The authors have compiled published records and new observations which include seven reptile and at least nine amphibian species.

Next there is an account of cryochemical transformation of the ice body and associated mineral formation in the Askinskaya Ice Cave by Olga Y Chervyatsova, Sergey S Potapov, Elena V Trofimova and Irek I Musabirov. A study of cryogenic mineral formations was carried out in the Askinskaya Ice Cave, situated on the Southern Ural within Bashkortostan. Calcite is the predominant mineral of the cryogenic suite. The authors conclude that the cryogenic mineral deposits in the Askinskaya cave owe their genesis to at least two basic mechanisms: firstly, crystallization within the freezing film of water on the ice surface, which is the most common mechanism both in the Askinskaya cave and in other ice caves, and secondly crystallization inside the fluid inclusions within the ice. This second mechanism is rarely discussed for cave conditions but is known from model experiments on freezing aqueous solutions. There are signs of post-cryogenic transformation of deposits, consisting of agglomerations of primary microcrystalline cryogenic carbonates, with the addition of a new generation of calcite with morphology typical of low supersaturations.

Ángel A Acosta-Colón, Benny X Bonet-Santiago, Joaquin Alonso Mont, Ruddy Anto Sinulingga and Sedarta Sitepu from the University of Puerto Rico and Harimau Conservation describe 3-D cave mapping in the karst region of Batu Katak, Northern Sumatra, Indonesia. They explored and mapped five caves as a conservation action, to help protect the karst forest and its geological importance. As across the rest of Sumatra, this region is impacted by palm-oil farms, illegal deforestation, poaching and mining. The aim of this study was to verify the safety of the cave environment and to establish the cartography of the caves that surround the village. A total of 1.2km of cave passage was surveyed, with 126.6 million data points collected. The cave maps and the measurements of environmental parameters are being used to help enhance local ecotourism practices and inform future research into understanding the unique karst habitat biodiversity. Based on physical evidence noted during the study, the critically endangered Sumatran tiger has used one of the caves as a habitat.

Stephen A Craven talks about racial segregation at Cango Cave in his account of the effects of the Nationalist Government of South Africa’s apartheid legislation on the management of Cango Cave. The segregation resulted in both bad publicity, both locally and internationally, and structural alterations to the cave that would have affected its internal environment.

In the UK, Rob Dinnis, Martin R Bates, Silvia M Bello, Laura T Buck, Jesse S Davies, Richard C Preece, Elizabeth A Walker, John Boulton, Damien Flas, Sarah-Jayne Harris, Jonquil Mogg and Remmert Schouten examine archaeological collections from Long Hole, Gower, and their place in the British Palaeolithic. At the time of its excavation in 1861, the cave site of Long Hole was recognized as important for establishing the antiquity of man in Wales. However, in comparison to its more illustrious neighbour Paviland Cave, it has received very little attention since, Rob Dinnis and his co-authors redress this balance by their examination of the three documented excavations firstly by Colonel Wood in the 1860s, secondly by John Campbell in 1969 and, most recently, the small-scale work in 2012 described in this paper. The authors feel that previous suggestions of two late Neanderthal occupations are unconvincing. Instead, they conclude that lithic artefacts from Long Hole are reminiscent of Aurignacian material from Paviland Cave, suggesting that they were left by some of Britain’s very early modern human occupants around 37–35,000 cal BP.

In the Forum section, there’s a note from Gina Moseley about the British Cryogenic Cave Calcite Competition funded by the BCRA Cave Science and Technology Research Fund. The aim was to find British caves that contain cryogenic cave calcites. A total of ten caves with this type of calcite were discovered as a result of the competition. There were five in the Mendips, four in South Wales, one in the Peak District and one in Scotland. In addition, there have been further discoveries since the competition closed. Gina hopes to obtain permission to sample the deposits as part of a wider project that aims to improve understanding of the mineralogy, formation and ages of this type of calcite.

Cave and Karst Science is published three times a year and is free to paid-up members of the British Cave Research Association. Non-members may obtain copies for an annual subscription of £28 (plus postage for non-UK destinations). A discounted student subscription is available. The publication contains a wealth of information and represents excellent value for money for anyone with an interest in the science of caves. It is well-presented throughout, with a clear, attractive layout and numerous high-quality illustrations.