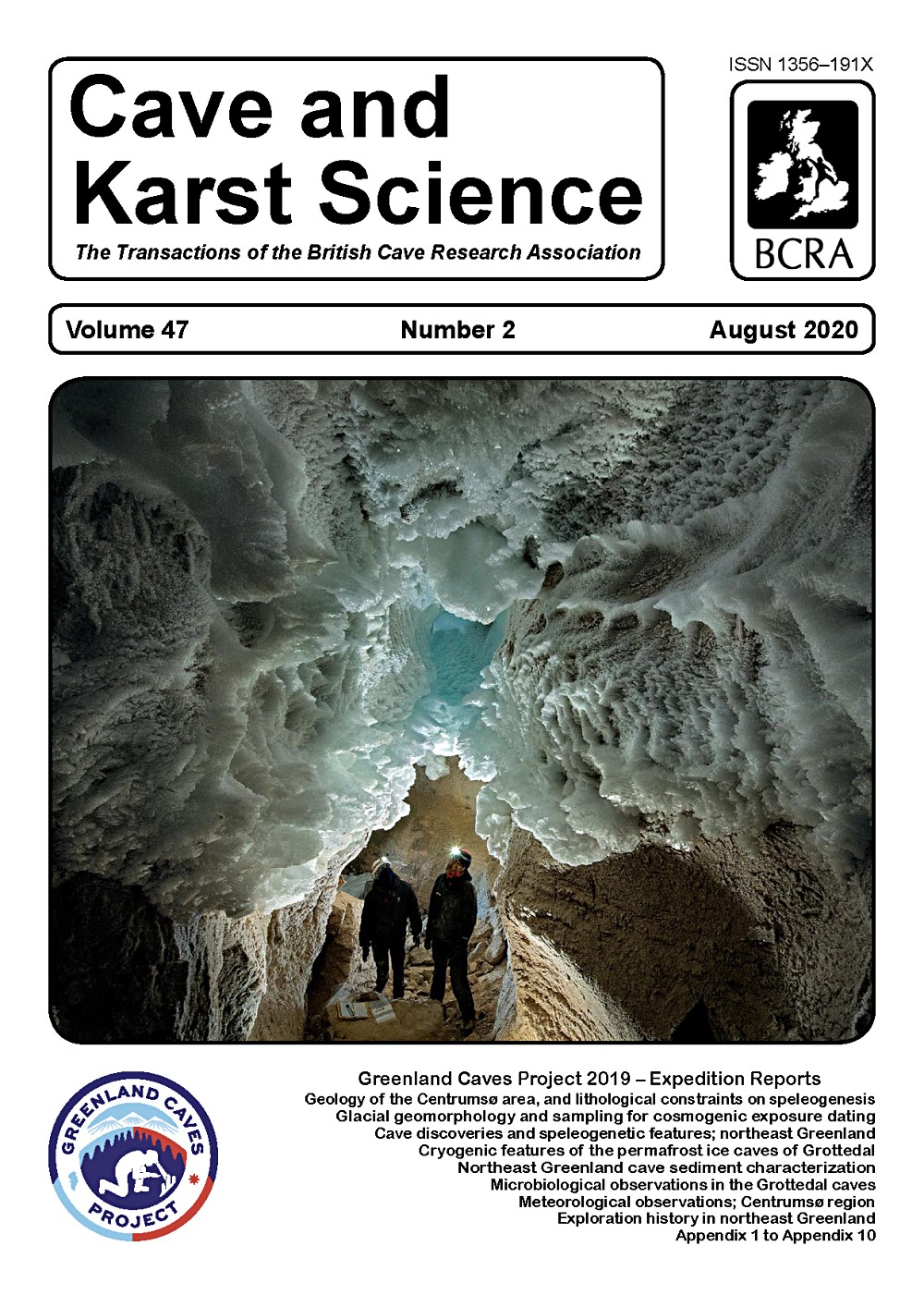 The latest edition of the BCRA’s journal Cave and Karst Science is wholly dedicated to the reports from the 2019 Greenland Caves Project 2019 expedition. This was the latest and largest of a series of expeditions which started in 2015. It involved an interdisciplinary team, with members specialising in geology, glacial geomorphology, palaeoclimatology and geomicrobiology.

The individual reports presented are dedicated to bringing together the observations, discoveries and preliminary results of this interdisciplinary research.

In the opening report, Gina Moseley describes the recent Greenland Caves Project expeditions to north-east Greenland in the context of the area’s previous habitation and exploration history. M Paul Smith and Jan Audun Rasmussen update the existing knowledge on the bedrock geology of the expedition area and provide some insights into lithological constraints upon speleogenesis.

Andrew Sole, Adam Ignéczi, M Paul Smith and Chris Clark use the high-resolution Arctic Digital Elevation Model to investigate the local glacial geomorphology and provide insights into the dynamics of the Greenland ice sheet. Gina Moseley, with ten co-workers, presents surveys, descriptions and photographic documentation of the major cave discoveries in the area since the 1960s, also giving details of smaller caves and cave leads that have not yet been explored.

The next three reports look at the caves in more detail. Hazel Barton, George Breley, Paul Töchterle, Gina Moseley and M Paul Smith present observations on the cave microbiology, as well as on the cryogenic features in these icy caves, while the results of the first study into the clastic sediments of the Greenland caves reported by Johannes Tischler, Paul Töchterle and Gina Moseley are based upon Johannes’ Bachelor thesis. In the final report, Anika Donner,  Paul Töchterle and Gina Moseley consider spot weather measurements taken in the region in the context of data from continuous weather stations located some distance from the field site.

Lastly, the appendices provide important details for those who might be interested in conducting a remote expedition in Greenland. These include information on the permitting process, logistics and transport, medical considerations, rigging, safety, and photographic equipment along with power options, as well as realistic budget details. Two additional research appendices related to collaborations with external partners include background to the first entomological study of the region, and a brief overview of participation in a study of the psychology of team members on remote research expeditions. This expedition was funded primarily by the Austrian Science Fund Start Prize (project no. Y I I 62-N37); however, the project and its associated research could not exist without the continued dedication of expedition members and logistics partners, or the ongoing support of many financial and equipment sponsors. Members of the Greenland Caves Project thank everyone involved for their generous support.

In their editorial, John Gunn and David Lowe point out that thanks to the financial contribution made by the Greenland Caves Project towards this publication not only is it a somewhat larger issue than normal but also it is available open access. This is to be welcomed, though it must be recognised that it is not something that can happen with every issue.

Cave and Karst Science is published three times a year and is free to paid-up members of the British Cave Research Association. Non-members may obtain copies for an annual subscription of £28 (plus postage for non-UK destinations). A discounted student subscription is available. The publication contains a wealth of information and represents excellent value for money for anyone with an interest in the science of caves. It is well-presented throughout, with a clear, attractive layout and numerous high-quality illustrations. Particular thanks have been given in this issue to Jerry Wooldridge for his work in optimising the photographs and other figures for publication.