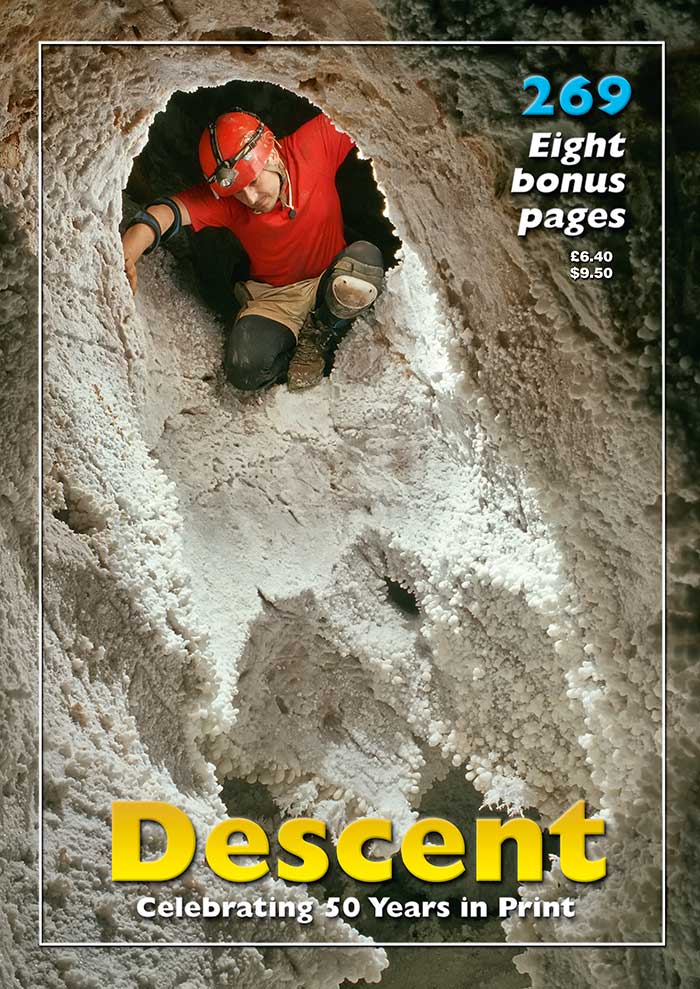 Descent 269 should now have landed on your mat, making an even heavier thud than usual with eight extra pages this issue! If a copy hasn’t reached you, it’s time to head over to Wildplaces Publishing to subscribe now or if you’re lucky enough to have a caving shop anywhere near you, call in and get one from them. As we’ve said before, we think Descent is great, and we want to shout about it to the caving world!

Newsdesk is overflowing with fascinating snippets from at home and abroad, starting with a round-up of what’s been happening in the wake of last year’s successful Thailand rescue. There are two symposia to look forward to in the autumn, starting with the 30th BCRA Cave Science Symposium held at the British Geological Survey in Nottingham, with an excursion to see the Ice Age Art at Creswell Crags. This is followed on the 9th/10th November by Travels Beneath the Earth, a symposium to celebrate the University of Bristol Spelaeological Society’s centenary, with a keynote talk from Dr Rick Schulting looking at evidence for cannibalism from Charterhouse Warren Farm Swallet on Mendip. There will be field trips on Sunday. Also in Bristol, on 18th December, Andy Torbet will be talking as part of the Wilderness Lectures series on diving beneath the ice.

Heavy floods in Mulu led to the death of two people from a tourist group in Deer Cave. In the Czech Republic, cavers are working on a 3D model of a show cave in Bohemia and in Italy, new work is being carried out on hand and foot prints in Grotta della Basura, which has a large collection of prints made by both adults and children. At home, BCA is looking at the possibility of providing personal accident cover for its members and is seeking feedback on the idea. Hidden Earth will be taking place this year in Wrexham on 27th – 29th September, so now’s the time to start planning for such things as the Video Salon and the Photo, Art and Survey Salons. There’s a report on the BCRA’s spring field meeting at the National Cave Monitoring Centre in Poole and news of a possible new species of human found in the Philippines

News from around the regions looks first at Mendip where Gina Moseley has been continuing her work on cryogenic calcite, and in good news for Cheddar, there’s the prospect of a study to look at alleviating problems of flooding in the gorge. In the north, it’s been an awful month for cavers with four deaths, including the tragic death of Harry ‘Eski’ Hesketh as a result of an accident in a dig in Curtain Pot. In other news there’s a report of a couple of previously unrecorded caves near the River Swale in Richmond, with more caves coming to light on Saddleworth Moor.

In the Forest of Dean, the Gloucestershire CRG held a very successful training event, and the Gloucester SS have organised a photo competition in the hope of getting more youngsters interested in caving. In the Peak District there’s a piece on pumping the sump in Rowter Hole and also a look at the sumps in Speedwell Cavern. In Wales, caves have been in the media spotlight with a follow-up to the successful television series Hidden Wales taking another look underground. Work has been done to alleviate concerns about the stability of the entrance area in Porth yr Ogof. In Scotland, Smoo Cave saw a celebration of the life of Colin Coventry who guided visitors into the cave for more than 30 years.

In Ireland, there have been some interesting finds in Tullyhona Rising Cave and extensions in Polldough Cave in Co Leitrim. There’s also been a big clean-up in Pollnagossan Cave in Co Cavan. This year’s SUICRO symposium will be held in Leitrim from Friday 25th – Monday 28th October. In other news, there’s been further work in Shannon Cave.

The main features start with an impressive spread on exploration in Lechuguilla Cave in New Mexico with some stunning photos and a mind-boggling shot from a 3D image of the cave that looks like a horde of drunken spiders has thrown a rave on the page!

Brendan Sloan takes a look at 25 years of rescue statistics, including the fact that 113 dogs have been rescued during that period, no doubt much to the relief of their owners, making the point that cavers don’t just rescue other cavers. Cats, ducks and rabbits are a lot less accident-prone, though, as they only managed one rescue each. There’s also been a massive increase in mountain rescue call-outs, as better mobile phone coverage allows easier access to rescue, whereas cavers are far more likely to effect a self-rescue rather than wait for a team to reach them.

In international news, a team of British divers have been working on the terminal sump in Son Doong cave in Vietnam. And a return to Pakistan by Simon Brooks has produced some interesting discoveries, and at home, the Carbis Bay Crew have been continuing their work in Cornish mines. In Write It Down!, Iain Barker takes a look at some caves entered through old mine workings and tells the story of one of his own underground exploits.

Don’t miss the caption competition, as there’s an excellent prize of a Boreo caving helmet and a top-of-the range Duo S headlight, together worth £480! And talking of kit, we all rely on it underground, but it’s easy to treat it badly, as a two-page spread shows. Speleo Reader has the usual round-up of books featuring the underground, from Robert Macfarlane’s Underland to recent crime fiction.

The stunning front cover features Rainer Straub in the Graveyard, Lechuguilla Cave, New Mexico taken by Max Wisshak, with the back cover, also by him, of Jörg Haussmann in the same area of Lechuguilla.

Every issue of Descent is impressive, and this is no exception to that rule. Descent is produced by cavers for cavers and is excellent value for money. If you or your club have a journal or newsletter you’d like covered so it can reach as wide an audience as possible, just get in contact and the Descent team will do their best to help. Copies can be obtained from Wild Places Publishing. Take out a subscription now and if you already have one, check that yours is up to date!