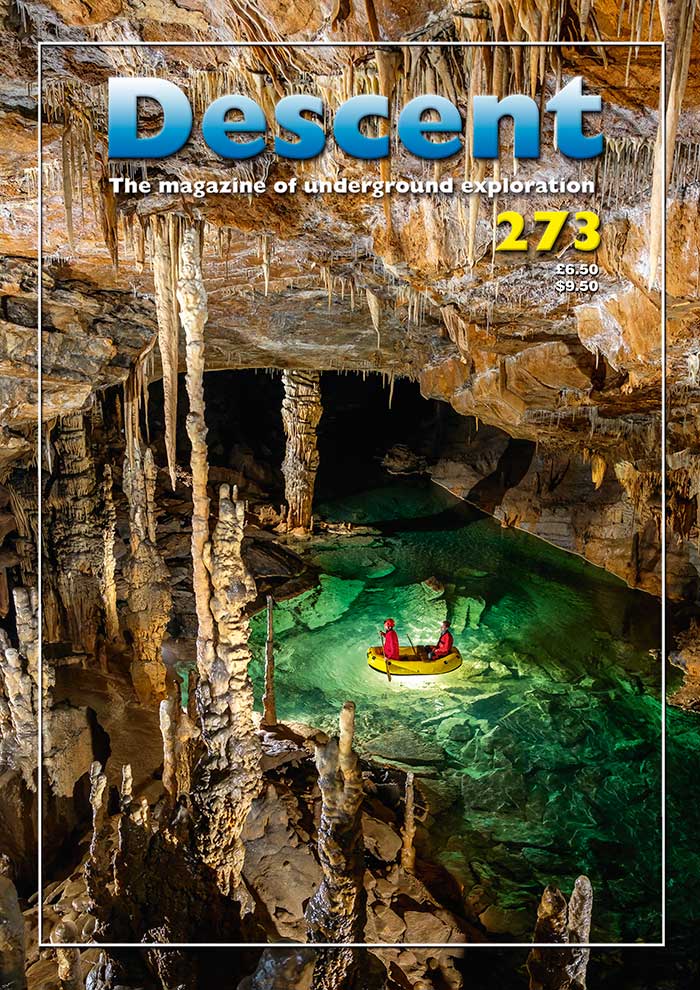 Descent 273 has now arrived! If a copy hasn’t reached you, it’s time to head over to Wildplaces Publishing to subscribe now or if you’re lucky enough to have a caving shop anywhere near you, call in and get one from them. If you’re keen to keep up with what’s happening in the world of caves and caving, especially now when actually going caving isn’t possible, then Descent is the magazine for you.

Newsdesk kicks off with a comment about coronaviruses (what else?) and their origins and an important point about keeping a check on what caving and mining events will have been postponed or cancelled by the outbreak.This means virtually all of them!

Possibly very useful at this time is the new caving board game, reviewed here, called Gone Caving! it has the backing of America’s NSS and certainly sounds to be worth a look. There are two mentions of online data sharing, Karstlink initiated by WikiCaves and the European and French federations being one and the other a karst spring database being set up by the University of Freiburg.

Two mentions are made of cave art: the Grotte Chauvet now has an online presence and there is an unusual story telling how a material once used to produce Palaeolithic art is now being used to protect spacecraft. Rather more sad news is that of the death of Dave Checkley and of two deaths of people at cave entrances, one being a fall in Australia and the other of someone collapsing in Yorkshire.

Regional news also starts with two short obituaries, of Derek Brandon and John Normington. Other news from the North includes mention of the awful weather, with the wettest February on record. John Cordingley reports on how the CDG records rainfall. From Wales there are reports of flooding in Daren Cilau and on Ogof Draenen. Similar mention is made of the weather by the Forest of Dean correspondent.

In Derbyshire, the Eldon Pothole Club breakthrough in Intake Dale Mine, made just as the previous issue was going to press, is briefly described and there is a report of a remarkable (and successful) rescue which entailed hauling a casualty all the way from the bottom of Titan to the surface. Quite an effort!

Mendip news includes the launch of the Mendip Cave Registry and Archive’s new book Somerset Underground Volume One edited by Rob Taviner and reviewed elsewhere in the issue. Pete Glanvill reports on cleaning work taking place in Barnes’ Loop in Swildons and there are two mentions of Wookey: a dig breakthrough into a sizeable chamber at the far end of Wookey 20 and the start of a project to lidar scan the whole cave.

International news all seems to be of new caves, with finds reported in Mexico, Spain, Meghalaya, Mulu and Myanmar.

Gina Moseley and Chris Blakeley have produced a fascinating account of work carried out in the very north of Greenland by the Greenland Caves Project. Part one of this two-part article covers the first expedition in 2015 and the second three years later. Part two will cover the 2019 expedition. The first trip was to Grottedalen, as Gina had found reports from 1960 not only of caves in this area but also, more importantly, of significant flowstone deposits in at least one of them. The 2018 expedition to Wegener Halvø, was less succedsful in its objectives of finding caves and calcite deposits but was memorable for the pod of over 250 humpback whales which surrounded their boat on the return journey.

Matt Ewles has written an interesting history of the recent developments in managing cave access by CNCC in large parts of the northern dales. Online booking systems now cover the caves of much of this large area and now have hundreds of registered users who have made over 1,000 bookings through the system. The Cave Rescue Council have produced their annual report covering incidents from 2019. In total there were 44 underground incidents and 152 surface ones, of which 145 concerned people and seven concerned animals.

Lena Ferriday of the University of Bristol has been part of a team conducting an oral history project focussing on the older members of the University’s spelaeological society, the UBSS. This was undertaken as part of the society’s centenary celebrations in 2019. The oral testimonies that have been collected during this project cover the whole period since the second world war and give a fascinating insight into how and why people have gone caving during this time. The oldest participant joined the society in 1938.

Following several book reviews, including that of Somerset Underground Volume One, mentioned above, there are articles in memory of Simon Halliday, who sadly died while diving in Lancaster Hole, and of Chas Yonge who has passed away after a long and very productive career as both a caver and climber.

The issue wraps up with Alan Jeffreys recounting a tale of Jim Salvona nearly suffering a very embarrassing case of exposure in Spar Cave on the Isle of Skye.

Descent is always a great read and this issue is no exception. Descent is produced by cavers for cavers and is excellent value for money. Copies can be obtained from Wild Places Publishing. Take out a subscription now and if you already have one, check that yours is up to date. In these strange times, when we cannot easily go caving, it is important to keep in contact with what is going on. Equally it is important to support those caving businesses that we all rely on.