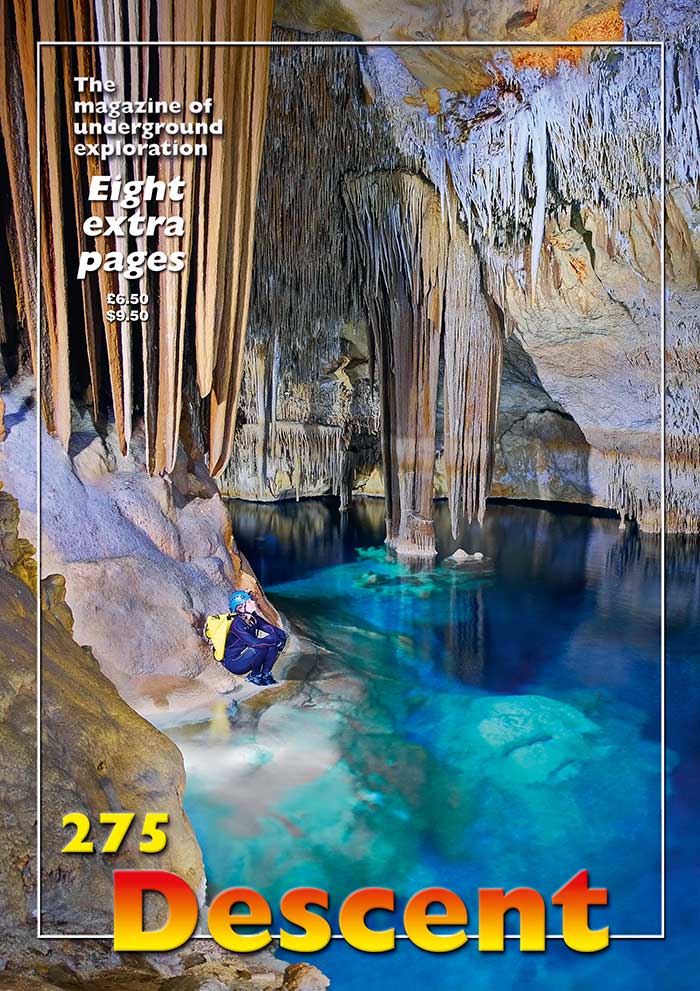 Descent 275 is now with us. Yet another issue compiled during this plague year, but still packed with interesting and informative material – and there is even news of new exploration in England!

Newsdesk starts with an update on how the pandemic is affecting caving in the UK and cautiously welcomes the reopening of caves and caving shops across the country while noting that in Virginia, at least, caving is being discouraged for fear that humans could infect a bat population and create a new wildlife reservoir for a human pathogen. Other items include a report on the judicial review of a Welsh government decision which the BCA hopes might lead to government acceptance of caving being covered by CRoW legislation. The BCA has committed a significant sum of money to this endeavour so cavers on both sides of the fence are taking a great interest in this matter. Cave archaeology has several mentions here, as well, from dating ochre mining in Mexico to 12,000 years ago to a film about the Revd William Buckland’s activities at Kirkdale and other caves in the early 19th century. A sad story is that of Khao Pina Cave in Thailand. After being freely open to visitors for a thousand years, the cave and its associated temple complex had to be closed during lockdown. It was reopened as those restrictions were lifted only to have to be closed again when graffiti, some of it very unpleasant, was found on the walls and formations. Access is now only permitted under supervision.

The Peak News page has details of ongoing work to reopen an engine shaft dropping into Intake Dale Mine and news of a brand new cave, Cussey Pot, appropriately for plague times near the centre of Eyam! News North includes extensions to Fairy Holes, Weardale, the newly discovered Thunder Windypit and diving at Bogg Hall Rising. Other regional news includes the information that Otter Hole will be closed for the rest of this year and a strange tale of vandalised camping gear in Lesser Garth Cave, near Cardiff. International news is taken by comprehensive reports of developments in Meghalaya from Thomas Arbenz and Simon Brooks

The first main article is a summary of activity in Longliffe Mine, in the Peak District, since the last report in Descent of this site in 2018. There have been a number of impressive discoveries here. An access agreement is being negotiated with the National Trust, the landowner – the site will be locked with an easily available key – and a conservation plan has been submitted to them, too. This will be used to monitor the site in the future.

The next article, by Thomas Gerber of the Abyss Speleo Club in Belgium, has some remarkable photographs made using light painting. These have to be seen, rather than described! Jo Duxbury has been looking at the number of cavers active across Europe. he thinks that the main finding, so far, as that we cavers cannot be made to fit any formal classification. Mike Simms looks back at at a couple of decades of work in Ogof Draenen, including much time spent with Andy Farrant trying to unravel the geomorphological history of this cave, now known to be over 1.5 million years old.

The Tolminski Migovec plateau in Slovenia has been the focus of expeditions by Imperial College CC since 1994. In this issue Tanguy Racine and Rhys Tyers bring the story up to date with details of discoveries made in 2018 and 2019. Including these finds in Sistem Primadona, Sistem Migovec is now over 43 km long and 800 m deep. Closer to home, Matt Ewles describes recent discoveries in Jenga Pot and Excalibur Pot on the North Yorks Moors. This part of the country has seen some remarkable finds recently.

Sadly, there are reports of the loss of three caving friends, Fred Davies, Helen Farr and Andrew Farrow. All will be missed by those who knew them.

Speleo Reader reviews the latest caving publications, including a review of the revised version of David Gill’s Journeys Beneath the Earth and a run down of the publications listed for the Tratman Award for 2019. Lastly, for those still unable to visit them, Tom Calpin has produced a collage of (nearly) all of the entrances listed in the Ease Gill chapter of the Northern Caves guidebook. One is missing as it is currently blocked, so your challenge is to identify the one not shown and guess why.

Descent is always a great read and this issue is no exception. Chris and Judith have done yet another excellent job. Descent is produced by cavers for cavers and is excellent value for money. Copies can be obtained from Wild Places Publishing. Take out a subscription now and if you already have one, check that yours is up to date. In these strange times, when we cannot easily go caving, it is important to keep in contact with what is going on. Equally it is important to support those caving businesses that we all rely on.