Angharad Brewer Gillham found herself a world away from her comfortable desk job in Switzerland when she joined the Rising Stars expedition in South Africa’s Dinaledi Chamber. Here’s her second report from the excavation.

Getting down into the cave is only half the story. Once you get down there, you have a job to do.

The floor of the Dinaledi Chamber and the Hill Ante-Chamber, which lies between the bottom of the Chute and Dinaledi itself, is mostly damp dark reddish sediment laying over a choppy layer of rock, which rises from the sediment in waves and blades. The fossils are found in this layer of sediment, and are easily damaged by clumsy boots – so the first thing you do at the bottom of the Chute is take off your shoes and socks.

You then pick your way over the rock, trying to avoid the sediment as much as possible (and definitely not treading on the metal flags used as markers, since these are pointy). A narrow, sharp corridor opens out into a cramped chamber with an uneven ceiling, flowstone formations disappearing up into the darkness to meet the chert roofing the chamber. A rock that fell from a wall some time ago provides a desk for a very carefully stored laptop, which, together with an intercom and cameras pointed at the excavation, provide links to the surface. There are also cameras strategically placed at the bottom of the Chute and on Dragon’s Back, in case an overenthusiastic scientist takes a wrong turn or someone misses their footing, so that rescue can be triggered as quickly as possible. Nobody has got lost yet. Actual accidents are rare and have, thus far, been minor – fingers crossed it stays that way.

There’s also wifi in the parts of the cave closest to the Dinaledi Chamber. This means we can chat to schools across the world, let people on the surface know we’ve arrived in one piece and show the scientists who can’t get through the Chute what’s happening above ground. It also means that the safety caver waiting at the top of the Chute doesn’t expire from sheer boredom in the two or three hours they might be stuck up there with nothing to do. Unless they forget to charge their phones. 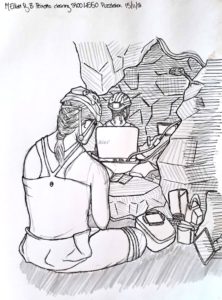 Back in the chamber, the original excavation lies in the centre, under a particularly low-hanging piece of rock designed to whack innocent archaeologists in the head every time they move wrongly. A kind of column of rock with a gap in it large enough to admit a person allows us to reach the other side of the chamber without standing in the excavation. Tiny passages, none of which seem to go anywhere, disappear into the stone.

At the centre of the original metre by metre excavation, a test pit burrows deep into the sediment. A plumb bob hangs over it, as nobody can accurately tell up from down by the point they reach the chamber, and a line of green thread points north. A laser level known as the Dude identifies our datum, and we use spirit levels, another plumb bob and tape measures to relate finds to it, meaning we can provide consistent x, y and z coordinates for every bone we get to. There is a total station, which is outside the cave, but due to Rising Star’s peculiar circumstances, it isn’t much help for recording anything. At the north and south sides of the pre-existing excavation, two units of 50 centimetres by 50 centimetres are the current expedition’s focus. One of these was expanded, to encompass the unit north of it, because archaeological finds don’t respect arbitrary grid boundaries and there were interesting things disappearing into the north wall.

For a site which has yielded up more than 1500 hominin specimens, it’s extremely small. The material excavated by the 2013 expedition was very dense. At first the units we excavated were less dense, suggesting an edge to the bone scatter, but after getting roughly one five-centimetre level down with our toothpicks and paintbrushes, we started to hit commingled bones, often delicate and friable. It’s possible some of them were sat on five years ago. After all, one cannot excavate and levitate at the same time.

At first, the sediment was tightly packed and difficult to shift effectively, but further down it becomes looser, with chunks of clay that flick out the second you look at them funny, causing much cursing as they ruin our neat five-centimetre levels. Deceptive pieces of flowstone and broken-off stalactite gleam white among the dark soil; we try to identify these before we end up painstakingly photographing them and recording them. Unlike bone, they glisten when you look at them closely, but sometimes you have to look at them very closely.

Because we all arrived with different levels and types of excavation experience – and because no site is quite like any other, especially if it’s 30 metres below the surface and you have to perch between rocks to excavate it – Marina and Becca had run us through their protocols and processes before letting us loose underground. Given the unusual nature of the finds, the documentation is particularly detailed for an archaeological site. I’m told a lot of the initial recovery protocols were based on standards from forensic anthropology, and though I wasn’t there for the 2013 expedition, I did find the documentation process we used this time familiar from my Master’s, which was in forensic anthropology.

We work in teams, two excavating the two units and one documenting finds; the person documenting finds possibly has the worst job, as the only corner left for them to sit in is highly uncomfortable, and there are often long gaps between calls for tags, sediment bags or the recording of photograph numbers. I eventually bought a sketchbook to keep myself busy.

But there definitely isn’t enough room for everyone to excavate at once, and it’s distracting and inefficient for an excavator to break off their work and document the state of the level. There also isn’t room for more than three or four people in the chamber. Occasionally one of the cavers comes down and takes photographs – which sometimes means you hear a suspicious click and look up to find a camera-wielding caver perched three feet above your head, and more importantly your excavation unit. It can get pretty cramped, especially at the end of the day, when everyone’s packing up and moving around. 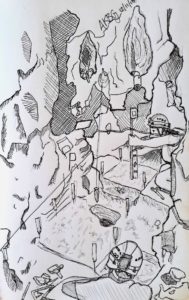 It’s painstaking work. You read me correctly when I said we used toothpicks – though occasionally we make use of porcupine quills, which are sharper and a little softer, once we get close to bone. The quills and toothpicks bring the sediment in each unit down to five-centimetre levels, separating any fossils as we go so that they can be photographed, recorded and collected either at the bottom of the level or when it becomes impossible to continue excavating without disturbing the exposed fossils. All sediment is collected and removed from the cave – teaspoons, paintbrushes and toy dustpans are our friends here. So is the pulley system we use for raising and lowering bags through the Chute. Things frequently get stuck, which means climbing partway into the Chute to unstick them, and full bags sometimes have to be dismantled and sent down in sections en route.

Fossils, of course, get more gentle handling. The thought of a bag full of fossils – even securely wrapped in bubble wrap and tactically deployed Tupperware – bumping and crashing its way up the Chute makes me break out in a cold sweat. They are so friable and so easy to damage that they are nursed from person to person up the Chute and out of the cave, like a sort of self-renewing relay race. We can’t use consolidants on the fossils in the cave, as all the options available either won’t cope with the humidity or will asphyxiate the excavators, so when we remove them they are very delicate indeed. You hold your breath just moving them into a piece of bubble wrap. Preservation work, along with most of the ID and analysis, is handled in the lab.

It’s a good thing I’m not claustrophobic. There is not much space to work in either unit, and getting to the southwest unit requires some climbing and scrambling through a small and pointy hole in a column of rock. It feels cold, relative to the outside world, and the humidity is extremely high. We have cushions and mats, which helps with sitting on uneven, pointy rock for hours at a time to excavate, but it’s still uncomfortable – a fact your knees will remind you of when you finally stand up again. We do make a point of getting up and moving around, to fetch snacks, swap places with the documenter, or locate a tool, but you still find yourself constrained. It’s a very small area – in most places there is little headroom and not much space to stretch. The rock is not forgiving and you do not want to tread in the excavation.

I can’t say I actually notice I’m uncomfortable while I’m excavating, though. It’s absorbing work; it soaks up your focus completely. You have to pay close attention to spot the faintest glimpse of bone among the soil – if you’re not paying close attention, you may well hit something you don’t want to hit. Becca, carrying out delicate work on a complicated matrix of fossils in the northern units, actually used a little tool to puff air over the bones and clear dislodged dirt away rather than using a paintbrush – that’s how fragile these fossils can be. You also have to take care over the level, which you want to remain even. That means trying not to flick a heavy clay clast out of its place in the soil. It may be holding something up. If it is large enough, it will wreck your nice neat level, which has implications for your documentation – which means it can have implications for the way you understand your finds later. Documentation, and understanding where you found a recorded fossil, is everything.

It’s hard work. Harder than getting into the cave, in a lot of ways. And when you put it on paper it’s deeply unappealing. “Don’t you get bored?” people ask me. In theory, yes, but in practice, boredom is so far from your mind it doesn’t exist.

I would have been very disappointed if I hadn’t have been able to do it pretty much every day.