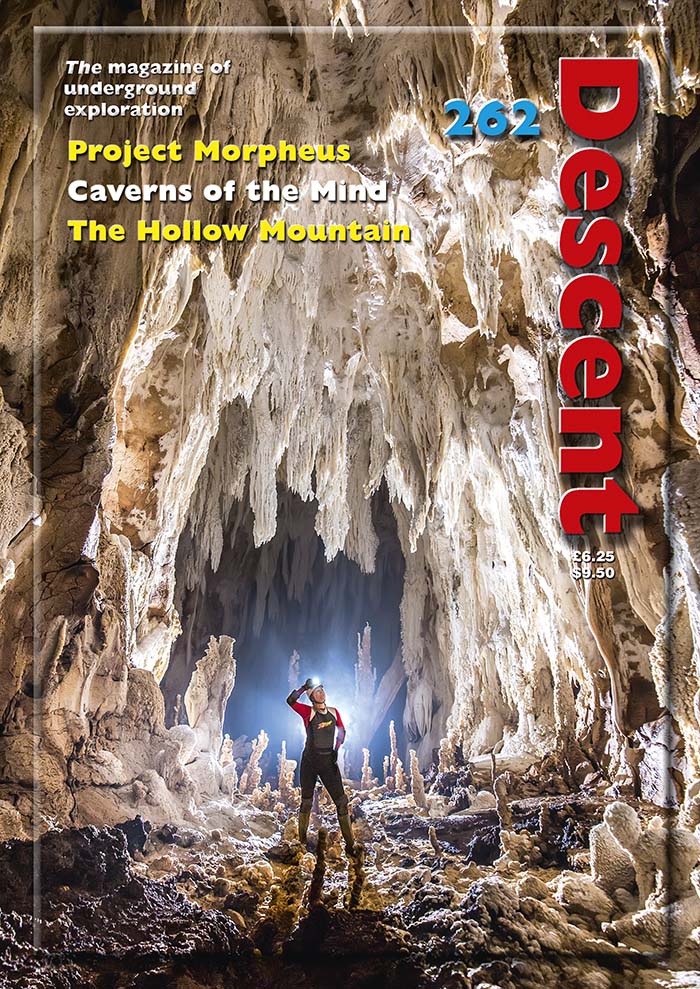 Descent 262 should have landed on your mats and in the shops by now! If you’re not a subscriber, we hope this short round up will tempt you in and send you over to Wildplaces Publishing to get your copy, or if you’re lucky enough to have a caving shop anywhere near you, call in and get a one from them. I know we’ve said it before – and we’ll keep on saying it – we run these articles because we genuinely think Descent is fantastic, and we want to shout about it to the caving world! And if you or your club have a caving publication you’d like us to cover so it can reach as wide an audience as possible, or a book, a journal or a newsletter, just get in contact and we’ll do our best to help!

Newsdesk will keep you up to date with goings-on at home and abroad with a wide range of fascinating snippets. There’s a timely warning about the dangers of data harvesting and a note on the changing privacy laws with the advent of the new General Data Protection Regulations. Take the time to check these out, as this potentially affects all clubs and cavers. White Nose Syndrome and its effect on bat populations in the States is in the news again, and there are interesting pieces on one of France’s national treasures, Chauvet Cave in the Ardeche. The long-running litigation between the discoverers and the Government might finally be at an end, and a new study has revealed more about the ancient charcoal found in the cave.

Those who like to settle down with beer and popcorn to watch a so-bad-its-good caving movie will be delighted to know that they can now point and laugh at two films that sound like a cross between The Descent and Jaws!

The huge of potential show caves to engage the public is shown in a note about a visitor numbers at Mammoth Cave in Kentucky, but in less good news, an ice cave in the Yukon appears to be shrinking fast and might well disappear entirely in the next few years. Climate change, we’re looking at you! If caving naked is your thing, then head over to Howe Caverns in New York in time for International Nude Day on 14 July but be sure to keep your wellies on….

Frasassi Cave in Italy is playing a part in the search for life on Mars. Elsewhere, it appears that the increase in wireless technology is having some unforeseen effects on cave fish. Closer to home, Hidden Earth is on the look out for a suitable new venue for this year’s conference and as yet, no date has been announced, so do keep an eye out on their website for developments.

In news from the Peak District, there’s been a clean up in P8, and some more pushing in Rowter Hole. The dig in Eldon Hole has once again come to a halt with the discovery of more bones, as well as both animal and human teeth. It’s not often cave diggers get showered with bits of long-dead people when some shoring collapses! Further North, there’s an impressive new discovery – Snowhope Cave – which proves yet again that there’s still plenty of new cave to be found. There’s been a collapse at the downstream entrance to Runscar Caves and caution is required. Five cavers were recently rescued from Providence Pot and there’s been anchor replacement in Roaring Hole in Chapel-le-Dale.

Mendip reports on another successful Cavefest weekend, as well as more boulder movement in the entrance ruckle of Swildon’s Hole. Please take care in the whole entrance area. Over in the Forest of Dean, a BCRA grant will enable some dye-tracing to be carried out in the catchment area of the Slaughter and Ban-y-Gor resurgences and some progress has been made at Woolaston Wood Cave. To help you keep track of the year, Gloucestershire CRG have been dressing up in some unusual locations or a new calendar and the Otter Hole Film Project has now entered its fifth year, with the team very mindful of the movement of water in the cave. In Welsh news, there’s been an activity day at the Dinas silica mines organised by the historic environment service, Cadw. Mendip’s Cavefest is returning to South Wales for a second tile over the August bank holiday weekend. Road works in the Heads of the Valleys continues to affect cave access routes and works to take account of the presence of bats have been needed.

Across the Irish Sea, the complexity of Cascades Rising Cave has once again been causing difficulty, and a party had to be rescued after encountering route-finding difficulties. In County Clare, dye-tracing work is underway in the Carron turlough area. This year’s Irish caving symposium will be taking place in Lisdoonvarna over the weekend of 26th – 29th October.

In Mines and Mining news, there’s a report on some holes in the ground on Madeira, some of which you can drive through, as well as a note on ancient copper mines in the Levant. A day of talks is being organised as a memorial day for mine historian Ivor Brown, who died last year. This is being held on 27 October in Shropshire. International News concentrates on a new Canadian depth record in Bisaro Anima in the Rocky Mountains and presents a survey and some photos.

The main articles start with Christine Grosart taking us cave diving in Croatia, illustrated by some stunning photos by Mark Burkey, followed by a fascinating look by Frank Pearson at how the underground world has been a source of creative imagination during the early years of British cave exploration, starting with the unfortunate Reverend Thomas Newnam’s accidental – and fatal – descent of Bristol’s Pen Park Hole. There’s an account of exploration in Sistem Migovec in Slovenia’s Julian Alps, accompanied by a survey of the cave. And if this article by Tanguy Racine fires your imagination, the team are actively looking for members to join forthcoming expeditions. One cave that’s never short of aspiring visitors is Lechuguilla in New Mexico, and Tim Fogg was lucky enough to return recently to help make a film for National Geographic.

In other features, caving film-maker Sid Perou looks back at what caving was like in the 1960s. Sid is also editing the filmed lectures from the successful day of celebration at the Royal Geographical Society in London last December. In Cornwall, the Carbis Bay Crew have been exploring a coastal mine at Pendeen Consols. The issue is rounded off by Philip Judson in the Write it Down! Slot who looks back at an epic trip in Krestik Cave.

The front cover features an amazing photo of Lucy Greenwood in Bluewater Cave, in the Philippines by Stu Gardiner and the back cover showcases two shots of Alan Anderson in Hagg Gill Pot by Bill Nix.

Every issue is Descent is a testament to the hard work put in by the editorial team and demonstrates their stunning flair for layout and design. Descent is excellent value for money and will keep you informed of developments at home and abroad. Copies can be obtained from Wildplaces Publishing here. Get your copy every time it appears by taking out a subscription and be sure to check that yours is up to date!