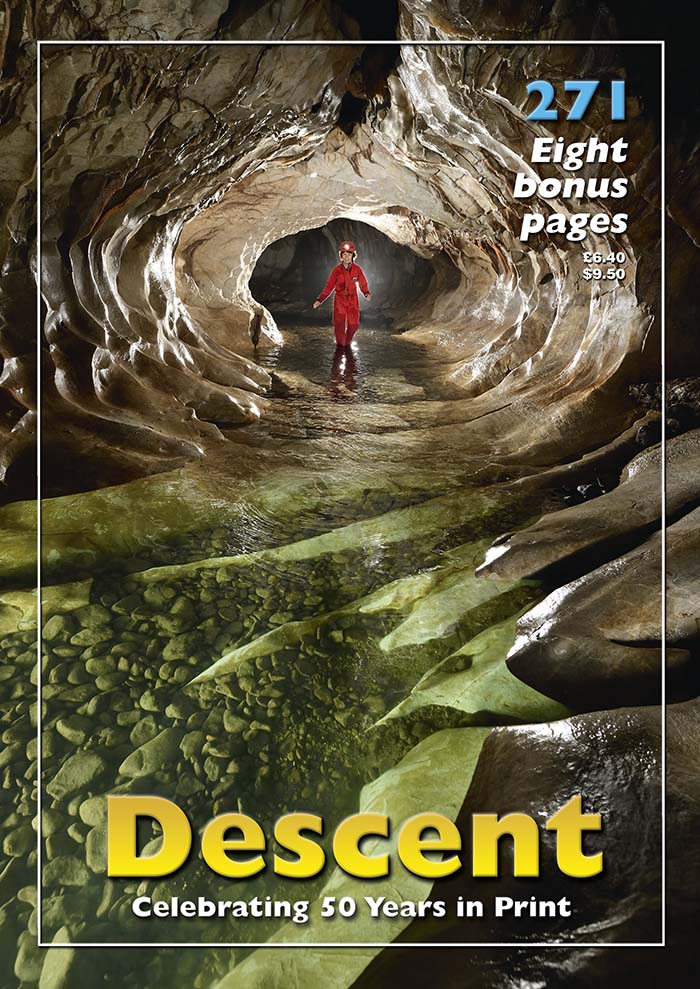 Descent 271 has now arrived! If a copy hasn’t reached you, it’s time to head over to Wildplaces Publishing to subscribe now or if you’re lucky enough to have a caving shop anywhere near you, call in and get one from them. As we always say, we think Descent is great, and we want to shout about it to the caving world.

Newsdesk contains a very wide spread of information.The Thailand rescue makes more news with mention of Connor Roe and Josh Bratchley receiving their MBEs from Princess Anne. The cave and new visitor centre at the site of the rescue have seen a massive influx of new tourists. Visits are now restricted to the first 200m of the cave.

Several new artificial caves are in the news: the Horsham Scouts project in memory of the late Paul Dold has resulted in no fewer than three caves being constructed in West Sussex, Glasgow and Lincoln. Elsewhere, what is described as one of the largest artificial caves in south-west England at 80m long has opened in Cornwall. Meanwhile, part of Mammoth Cave in Kentucky has closed for renovations.

A consortium of 200 scientists researching bats is sequencing the genomes of the 21 major groups of these mammals; amongst other things they are attempting to discover clues about their unusually long lifespans for such small mammals and their strong immune systems. Elsewhere, the US Fish & Wildlife Service has set up a challenge for researchers to come up with new ideas in fighting White Nose Syndrome.

Our Neanderthal friends are in the news again with a Greek cave having yielded a new record for the oldest dated skull outside Africa at 210,000 years old. Other recent research has seemingly shown that they were every bit as skilled at making and using fire as early H. sapiens. However, other recent research has cast doubt on the dating technique that has been used to assign some early cave art to Neanderthal peoples. Work by a group of scientists at Altamira and La Pasiega caves in northern Spain has cautioned that some dates are older than they should be owing to Uranium leaching from the calcite.

Regional news looks first to Mendip with a review of the Mendip Rocks festival which this year had a strong caving presence including the premiere of Andy and Antonia Freem’s latest film on Fairy Cave Quarry, and various cave-related walks. In the north, exploration has taken place in Keld Beck Cave in Cumbria and Pittington’s Caves, two slip rifts in Magnesian Limestone in Co. Durham. In the south-west, Peter Glanvill reports on a successful clean-up session in Pridhamsleigh Cavern, a cave that has suffered more than most from mud being spread around. As Peter says: “Regular sessions in Prid could well transform the cave into something that has been unrecognisable for more than half a century.” Welsh news includes a new survey of South Towy Mine and a rumour, no more, of a big discovery to the east of Herbert’s Quarry.

The main reports start with an article on the Eurospeleo Forum held in Bulgaria in September. About 200 people attended from 27 countries, including a group from South Wales CC. Duncan Hornby, the correspondent, seems to have thoroughly enjoyed himself both with the caving and the craft beer! In a sadder vein, Bill Nix shares his memories of Harry ‘Eski’ Esketh who died in Curtain Pot, Fountains Fell, in June.

There is a detailed article on an international meeting of cave photographers held in Japan in March and attended by the Descent staff of Chis Howes and Judith Calford. This includes six pages of beautiful photos of Japanese caves, lava tubes and cave life.The second main article is the first part of a two-part interview with Pavel Demidov who is closely associated with the exploration of what is currently the world’s deepest cave, Verëvkina in Abkhazia. This is a story of hard, very hard, caving and digging at depth and takes the story up to 2017 when the cave was officially the second deepest. The second part of the interview will appear in the next issue.

John Cordingley, who knows the story better than anyone, has written an account of the forging of the connection between Peak and Speedwell Caverns in anticipation of its 50th anniversary on 18th January 2020. There is a round-up of the events at Hidden Earth, this year held in Wrexham, north Wales. The winner of the latest caption competition is announced, and there are also four pages of publication reviews. The issue concludes with a review of three pieces of gear from Petzl –  the Stop, Freino Z and Rig – and with two more stunning underground photos on the back cover.

Every issue of Descent is impressive, and this is no exception to that rule. Descent is produced by cavers for cavers and is excellent value for money. Copies can be obtained from Wild Places Publishing. Take out a subscription now and if you already have one, check that yours is up to date.