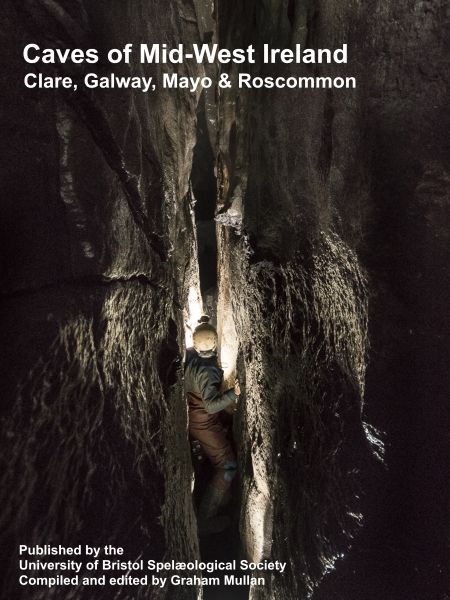 In one sense, Caves of Mid-West Ireland is the fourth edition of this caving guidebook, while in another it is the first. That is, the University of Bristol SS has a longstanding and well known intimate association with cave exploration in Ireland, and this is the fourth title published by the society, following on from The Caves of North-West Clare, Ireland (1969), Caves of County Clare (1981) and Caves of County Clare and South Galway (2003). With this latest edition covering the caves found in the counties of Clare, Galway, Mayo and Roscommon, it is easy to see that successive volumes encapsulate an increasing area of karst, expanding on their predecessors.

The book’s arrangement is fairly standard: the introduction leads to chapters on the geology and then the geomorphological history of the Burren, after which comes the lowland hydrology of the Burren plus the other counties covered. As might be expected, the bulk of the book is divided into geographical regions – the western Burren, high Burren, Clare’s outlying areas, Galway and the Cong isthmus, then the combined counties of Mayo and Roscommon. Within each, subdivisions deal with the caves of specific topographies – within the western Burren we have such regions as the Doolin valley, western Slieve Elva, the Lisdoonvarna area and so on – and hence finally to the cave descriptions.

The depth of detail within some of these is impressive, especially as the major caves are backed up with an area map showing the location and proximity to other sites, plus a survey. Typically, maps are in colour while surveys are line drawings, both well printed without any hint of the jagged, fuzzy lines that so unfortunately can crop with improperly prepared files. As an example, the section on the eastern side of Slieve Elva opens with a map and an overview of the area, then details the caves – each has a location, route description and, where relevant, information about any specific kit requirements and warnings concerning flooding. This section includes the Poulnagollum–Poulelva system and is completed with a fold-out survey for this and Cullaun Two on the back (one of two fold-out sheets in the guidebook).

A simple summary could cover much of the content: this is a caver-orientated guidebook, after three earlier editions it is a mature product that has built on the words of earlier authors and, indeed, six people are credited with much of the writing (plus a host of others whose fieldwork fed into the project) before it could be edited by Graham Mullan. The amount of work that has gone into it must have been extreme, and it shows – there are very few even minor niggles, such is the standard attained.

Caves of Mid-West Ireland represents a step up in binding quality from its immediate predecessor, being hardback rather than an encapsulated softback. Guidebooks can take a lot of hammering during the course of their useful life, so it is good to find that the binding appears strong with sewn rather than glued pages, and surprisingly the book opens flat under its own weight with a commendably good margin around the content rather than losing information in the spine.

Cavers active in Ireland will certainly wish to own a copy, especially given the value-for-money price of £20 following the discounted Irish launch at the SUICRO symposium in October and British presentation at the UBSS centenary celebrations in November. If you were not at either event, buy a copy by visiting the UBSS website. Postage is in addition at £5 for a UK address, £10 for Europe and an added £20 for the rest of the world – this is anything but a lightweight book, in all meanings of the word.