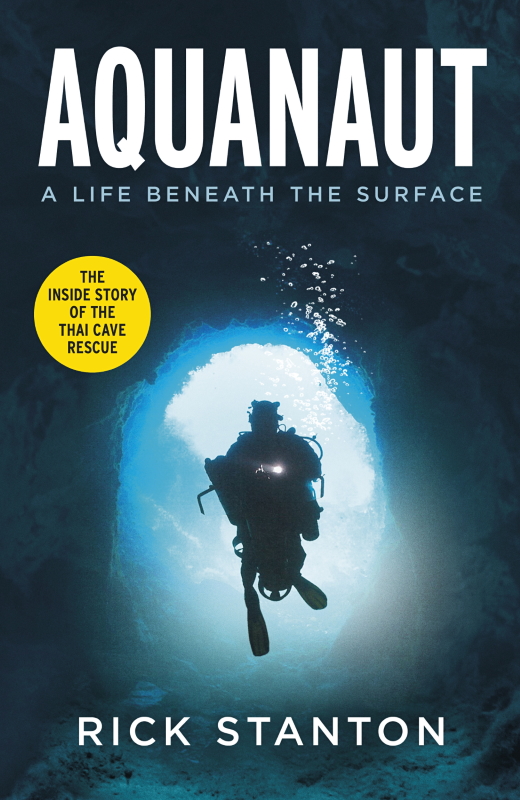 It is an honour to have been given the opportunity to review Aquanaut, and to immerse myself in Rick Stanton’s account of his numerous cave diving exploits, and his unique perspective on the now universally acclaimed 2018 rescue of the Wild Boars from Tham Luang Nang Non in Thailand.

Book reviews are not generally at the top of my list of favourite articles to read. By and large, I prefer news stories of cave discoveries, or caving adventures. So, if you have a similar mindset, please make this review an exception, as I don’t think I have ever read a better cave-related publication than Aquanaut. I picked up the book early in the evening and found myself totally engrossed several hours later completely unaware of the time. The following day, I spent two hours before work captivated by the narrative, and after reluctantly dealing with work matters for a few hours, finished the book over lunch the same day.

Rick Stanton, if he wasn’t particularly well-known before 2018, certainly rose to public prominence when he took a major role in the rescue of 12 teenagers and their football coach from a seriously flooded cave in northern Thailand in the summer of that year. As the news story developed over a number of days, there cannot have been a single corner of the globe that was not engrossed in the unfolding drama. Aquanaut combines a day to day account of the rescue, from the moment the young lads entered the cave, through the frustrations of the early days as various uncoordinated teams gathered at the cave, to the formation of an ambitious plan, and ultimate success, to world acclaim.

However, Aquanaut is far more than a first-hand account of an exceptional rescue by one of the primary players involved. Interspersed at intervals are tales from Rick’s colourful life, as he develops his interest in caves, becomes a highly accomplished cave-diver, and is involved in a series of record-breaking underwater cave explorations. Rick’s confident adoption of developing dive technology has allowed him to push further into caves than most people would ever dream of. This exceptional capability has meant that from time to time he has been called upon to help in the rescue of trapped cavers, and more sadly, the recovery of the bodies of divers who had died during remote and challenging diving operations. It was due to Rick’s notoriety and competence in this field that he was one of those immediately called upon to assist in Thailand.

I cannot fault the writing style. It is easy to read and follow the narrative, and it would be a challenge to create a dull story anyway from such a dramatic sequence of events, both on the ground in Thailand, and also throughout Rick’s eventful career. The structure of the book, each stage of the rescue being interwoven with pertinent highlights from Rick’s earlier diving adventures, works very well. It is somewhat as if Rick is sitting down in the pub after each tense day at the rescue site and winding down with reminiscences, both to entertain and to draw parallels between what is unfolding in real time, and lessons learned from the past.

For me the most memorable moment that those who followed the rescue story at the time (and how many of us didn’t?) was the day the boys were first found, and the video that was broadcast of that moment recorded on the camera John Volanthen had taken with him on that day. Rick’s account brings home vividly that moment, when the trapped party were no longer just a list of names, and were dramatically thrown onto the world stage as real, vulnerable human beings with all the frailty, team spirit, courage and bonding that the prolonged shared calamity had forced upon them.

Lastly, a word of warning. When you pick up this book and start to read it, please make sure you are not engaged in some other important task at the time. I did a King Alfred at one point, completely forgetting the cakes in the oven that I was dutifully preparing for cave dig night that same day, until the smell of carbonised shortbread started to drift up the stairs an hour later. 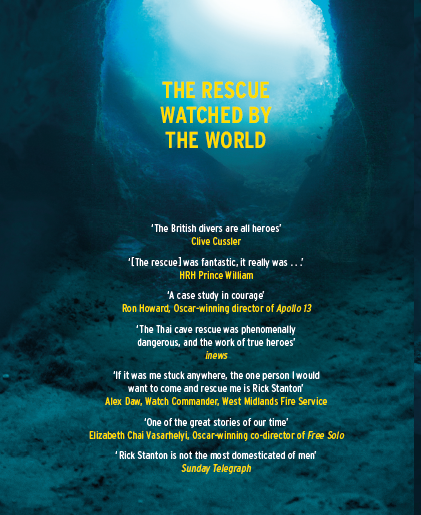