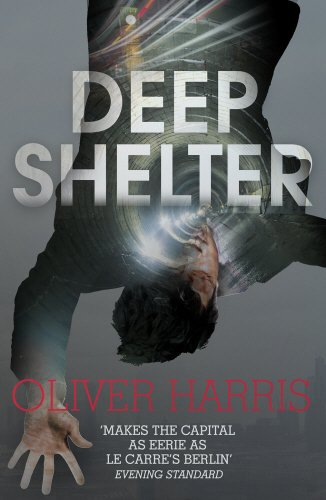 DC Nick Belsey is driven down into the miles of abandoned tunnels under the streets of London in search for a missing woman. As it was his fault she was there in the first place, his job will be on the line if that embarrassing fact comes out.

Detective Constable Nick Belsey isn’t exactly a poster boy for the Met. He’s corrupt, lazy and not even slightly abashed by how he nearly ended up losing his job through his antics in the last book in what is now clearly a series. Deep Shelter  opens with him intending to take a crafty nap in his car, parked in a London side street, with an iced coffee laced with a double vodka for company. His illicit attempt to cool down on a hot day comes to an abrupt end when he sees a BMW tearing around a corner in front of him. A hectic car chase ends in Belsize Park when the driver bails out and dashes away on foot. Belsey chases the suspect down a dead-end alley, but then loses him when the man seemingly vanishes into thin air.

Belsey’s interest is piqued; after all, chasing disappearing men is more fun that investigating a series of break-ins at a library whist he’s on restricted duties. He ends up underground in a series of abandoned tunnels that appear to stretch for miles under the capital.

Having all the style of a pig in muck, Belsey decides that’s a good place to take a girl on a date, but the devil very definitely doesn’t look after his own on this occasion. The girl disappears and when Belsey gets a cryptic email, it’s clear she hadn’t just wandered off of her own accord. Never having heard the phrase ‘when in a hole stop digging’, Belsey takes a series of dubious decisions and ends up finding himself in some very big holes indeed.

I’ve spent much of my adult life wandering around holes in the ground, so I felt very much at home in the labyrinthine complexity of Oliver Harris’s fast-paced and massively entertaining romp underneath London’s concrete tower blocks. Short, punchy sentences effortlessly move the plot along, and Harris’s eye for detail is always spot on. I’ve been in some of the places he describes and I felt I was right back down there along with Belsey.

The networks of Cold War tunnels under various parts of the country are as extensive as they are little known – apart from amongst cavers, mine enthusiasts and some history buffs. Harris skilfully evokes the nuclear fears of the 1980s, and vividly brought back to mind the days when, with several friends, I went looking for a supposed concealed rocket silo in Wiltshire. To this day the use of the word ‘haystacks’ is still enough to make one of those friends twitch a bit and look over his shoulder. Another friend, on one of the same illicit trips, once pretended – wholly unconvincingly – to be a tree when the rest of us scarpered into the bushes on the side of Box Hill. ‘Nuff said.

Deep Shelter hooked me right from the start and I ended up writing off an entire day just so I could finish it in one sitting. There’s enough detail to intrigue without ever threatening to swamp the narrative, and Nick Belsey is a thoroughly entertaining anti-hero, never more so than when he’s getting up to his neck and beyond in a very complex – and wholly rogue – investigation.

Quite how Harris will manage to top this one, I don’t know, but I certainly won’t miss Belsey’s next outing. After reading this, you’ll never look at the ground beneath your feet in London – and several places elsewhere – quite the same way ever again. And don’t dismiss the central premise as unbelievable either. It’s all too close to the truth in a lot of places.

Thanks to www.crimereview.co.uk and and UBSS for permission to reproduce this review.