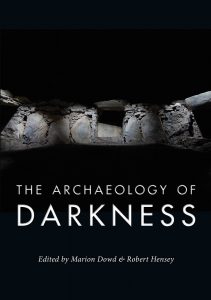 By way of preface to Archaeology of the Caves of Ireland in 2012, archaeologists Marion Dowd and Robert Hensey brought together a number of specialists to discuss in conference the impact of darkness found in caves (and artificial spaces such as souterrains) on the development of human history. The results were subsequently published in this book, The Archaeology of Darkness, edited by Dowd and Hensey.

There are 13 chapters, covering a very wide range of topics, from basic archaeology to overtly speculative essays constructed on little more than subjective deduction. While most contributions deal with European cave sites, there is also a study of hare paenga (canoe-shaped houses) on Easter Island, but virtually all chapters grapple with the role of darkness in ritual, which can only be guessed at, given an almost total lack of solid evidence.

The role cave art played in society in areas such as France and Spain is still not fully understood, along with its relationship with flickering shadows from primitive light sources. Some interesting theories are debated in this book, some of them a little ‘out there’, and although the pedigrees of the contributors indicate academic authority, it must be said that overall, the book presents a curious mix of contributions, with some chapters being more appropriate for a club or mining journal. At least one, which purports to illustrate the effect of darkness on modern explorers, appeared to me to be incompatible with the aims of the publication. That said, each chapter provides a healthy set of bibliographic references for readers wishing to penetrate deeper into the subject and there is a decent selection of illustrations. Sadly, as customary for this type of volume, there is no general index at the back which should be a requirement for academic textbooks.

The information on the back cover states that this book is a first on the subject of human experiences in darkness and if that is so, then it remains to be seen how research progresses in the future. Our chief difficulty is discarding our modern world view to place ourselves into the mindset of ancient peoples and see how they dealt with darkness.  This is not an easy thing to do in any archaeological field, so this work may be seen as a pioneering attempt, albeit with varying results.