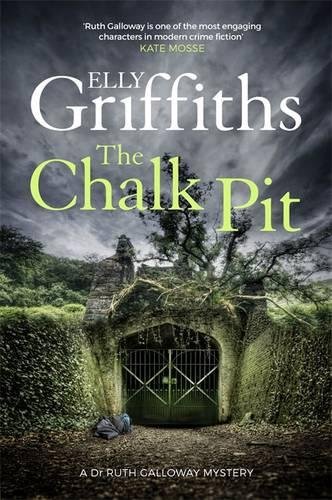 Elly Griffith’s latest outing for Norfolk archaeologist Dr Ruth Galloway, involves the chalk mines under Norwich, with which I have a certain amount of history even though I’ve never visited them. The combination of mining and archaeology promptly took The Chalk Pit to the top of the To Be Read pile.

When a homeless woman goes missing. DS Judy Johnson does her best to get information out of the local rough sleepers, who – understandably – are wary of any involvement with the police.

Matters become complicated when two homeless men are knifed to death, one on the steps of the police station. Nelson, Judy and the laddish DS Dave Clough are all dancing to the tune of their boss, Superintendent Jo Archer, who isn’t pleased that little progress seems to be being made with any of the investigations. Things go from bad to worse when a local mother of four goes missing from her own doorstep and the press are all over that like a rash, after mostly ignoring the disappearance and deaths of the rough sleepers, but no surprise there.

Griffiths handles the sprawling soap opera of a bunch of coppers and their partners in rural East Anglia well, and their love lives never feel in danger of swamping the story. I’ve followed the series sporadically, enough to remember that Ruth had a fleeting affair with DCI Harry Nelson, and is now the mother of cute Kate. Nelson’s glamourous wife Michelle knows, and even seems to be OK with him seeing both Ruth and the kiddie, but he hasn’t yet plucked up the courage to tell his two grown-up daughters, although he’s very clearly skating on thin ice, especially when he ends up having to take Kate home with him when Ruth has to dash off to her mother’s bedside when she’s taken ill.

As a caver, I enjoyed the way the various tunnels under Norwich undercut the story – quite literally in places – and my own connection with the old chalk workings beneath the city came up very quickly in the story. In 1988, I received a rather bizarre phone call at work from a fellow caver in Norwich, telling me that a double decker bus had fallen into an old chalk pit, and he was worried that the city council were just going to fill all the tunnels with concrete. Things like that matter to cavers!

I got the call as I was then the chair of the Council of Southern Caving Clubs. In response to my weak rejoinder that I didn’t really think our area went that far, he briskly pointed out that Norwich certainly wasn’t ‘Ooop North’. I then suggested he tried the Derbyshire Caving Council as they were probably geographically closer. His rejoinder: ‘They told me to ring you!’ rather put an end to my attempts to pass the buck. I then spent the rest of the afternoon on the phone to the planning department, trying to convince them of the historic value of the mines. I think the wholesale deployment of concrete was at least temporarily foiled by my frequent mention of bats being a protected species! I had no idea whether there were bats there or not, but neither did they, so the argument carried some weight. Fortunately, my boss at the time was caver and cave diver Mike Thompson who saw nothing odd in the slightest about me spending all afternoon, when I should have been working, talking to people about a bus down a hole on the other side of the country.

My only quibble with The Chalk Pit is that the use of the present tense seems a trifle awkward at times, lending an oddly stilted feeling to some passages, as though the book isn’t quite at home in its own skin. But that’s a very minor gripe in an otherwise excellent read. I’m well and truly converted now and want to find out what happens next in the complicated private lies of a bunch of Norfolk coppers and an archaeology lecturer.