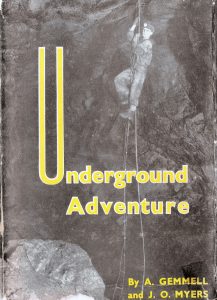 As part of a new series on classic caving books, both fact and fiction, Alan Jeffreys takes a look at Underground Adventure by A Gemmell and JO Myers.

Before the Second World War, the quantity of British caving books was minute: several volumes penned by Herbert Balch and Ernest Baker attempted to provide narratives to the taste of general readers, as well as a number of quaint regional guides and commentaries, very much in the florid Victorian style, were really all that the seeker after truth could find.

Everything changed in 1952 with the appearance of a slim book – Underground Adventure by Arthur Gemmell and Jack Myers, both by then members of the Northern Pennine Club. Here at last was a first-hand account of what potholing was really all about, written with the enthusiasm and commitment of dedicated speleologists, referencing all that was enticing about northern caving while hardly revealing anything of the tumultuous politics that marred much of the immediate post-war period.

There are nine main chapters, each telling the story of a major Yorkshire discovery, and two further sections recounting gains and losses experienced by every serious cave hunter probing small or remote little holes in search of their own holy grail.

The modern reader should bear in mind that virtually all these explorations (up to 1948 when the manuscript was completed) were achieved during the war or very shortly afterwards when access to the Dales was generally by bicycle, food and petrol were strictly rationed, and nothing in the way of customised caving gear was available. The bulk of the work was carried out on behalf of the British Speleological Association (forerunner to the present BCRA), using rope ladders of questionable vintage, hemp and sisal lifelines, carbide or bicycle torches and any old clothes that could survive underground. Members were strictly regimented by the association’s monarch Eli Simpson, who customarily directed cavers to examine sites he himself had catalogued years before. Little was uncovered by sheer chance, except of course the momentous discovery of Lancaster Hole.

The text is written in such an engaging and immediate style that it draws the reader right into each exploration; it is almost impossible not to want to rise out of one’s fireside chair and clamber into each pothole described. As a recruiting manual, Underground Adventure cannot be bettered and it is absolutely true that several generations have been directly inspired to take up caving as a result of it.

Chapters cover explorations in Little Hull Hole, Hull Pot, Simpson Pot, Gaping Gill, Disappointment Pot, Notts Pot, Pikedaw Calamine Caverns and the Lancaster-Easegill system. Most of the text was written by Arthur Gemmell, who also compiled the surveys and maps, and the book is well illustrated with fine photographs taken by Jack Myers.

When you’re asked why you go caving – by someone who is at least interested and not trying to score a cheap laugh – it will suffice to produce a copy of this book and advise them to read it. It is simply the answer to all their questions, possessing a timeless charm that keeps it relevant, even in this technological age. If you haven’t read it, do so immediately!

Used copies are available from amazon.