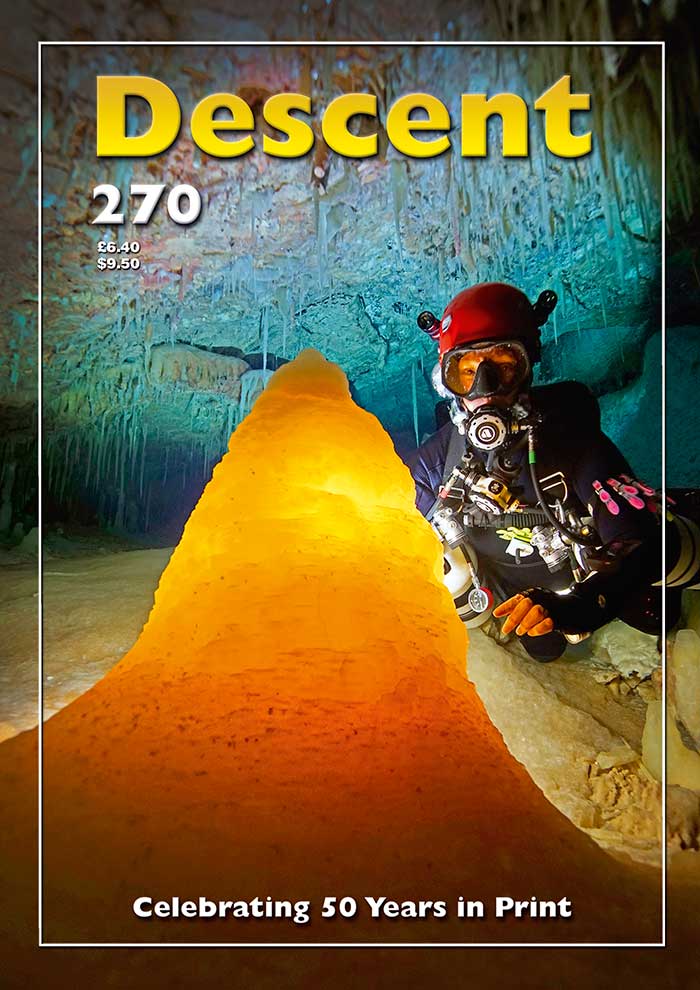 Descent 270 has now arrived! If a copy hasn’t reached you, it’s time to head over to Wildplaces Publishing to subscribe now or if you’re lucky enough to have a caving shop anywhere near you, call in and get one from them. As we always say, we think Descent is great, and we want to shout about it to the caving world!

Newsdesk contains a wide range of information from around the world. The Thailand rescue continues to make news with mention of two films about the event both due to premier this autumn. One has both Belgian diver Jim Warny and Thai rescuer Nopadol Niyomka playing themselves! In addition, National Geographic have included an account of the cave, Tham Luang, in the second series of their Drain the Oceans series. In this programme, a 3D scan of the cave, made by a British team, has been used to show the full extent of the cave from the entrance to where the children sheltered awaiting rescue. 3D scanning is becoming an important tool, a huge project to map Carlsbad Caverns, needing a budget of $186,000, is due for completion by the end of the year.

Mention is made of Eurokarst a biennial conference on the hydrogeology of karst and carbonate areas, though the next one, to be held in Malaga, Spain, has been postponed until June 2021 to avoid clashes with other events. Also in Europe, the European Space Agency has been seeking ‘innovative ideas’ for exploring caves on the moon. They are looking at assessing how the volcanic caves might be adapted for living space.

There is good news and bad news about cave rescues. For the former, there were three successful rescues. Two cavers were rescued from Falsteiner Höhle in Germany. Three Belgian cavers were brought to the surface after becoming lost in the Rubicera-Mortero de Astrana system in Cantabria, Spain. Also, 28-year-old Sum Bora was found after being lost for four days in a cave in Phnom Chakrey, Battenburg province, Cambodia. On the down side, more detail is given about the death of a tourist and a guide in Mulu’s Deer Cave and there is a brief account of the unsuccessful rescue of two men from Jaskinia Wielka  Śnieżna in the Tatra National Park in Poland.

The upcoming BCA ballot on constitutional change is outlined and BCA also needs a new Conservation and Access Officer as Louise Baddeley has had to step down. Interested parties should contact the BCA secretary.

Regional news looks first to the North where over 500m of newly discovered passage in Fairy Holes, Weardale is described. CNCC undertook a clean-up in Crackpot Cave, Swaledale. This was filmed and the resulting short film can be viewed online. Various access changes are listed, including the new online booking system for Leck Fell. There are two obituaries, recording the deaths of Bob Cockeram and Ian Cummins.

In Wales, a team from Morgannwg CC have made a further breakthrough at the end of Town Drain, significantly closing the gap to where the cave presumably enters the Little Neath River Cave and raising the prospects of non-divers reaching New World Passage beyond the Little Neath sumps. Elsewhere in Little Neath, it is reported that the rescue dump was ransacked only a short while after it had been restocked.  There is an account of Cavefest 2019 which was held in Crickhowell in August and seems to have been a great success. Planning will soon start for Cavefest 2020!

The main news from the Peak District is, sadly, another obituary, this one for Nigel Ball, long time BCA Training Officer, who died in July.

There has been activity at various places around the Forest of Dean, from resurveying in Slaughter Stream Cave by Mark Tringham and his team to aven climbing in Otter Hole by Raif Evans and Ian Healey. There is also intriguing news of cavers being filmed swimming in Otter Hole using a camera suspended on a zip-wire above the water.

On Mendip, Trevor Hughes gives an account of recent explorations in Stock Hill Mine Cave. The description of the finds (750m so far) is slightly confusing, but having seen Trevor’s draft survey, this is not surprising! It is certain that Stock Hill will figure prominently in the JRat Digging Award presentation on 23rd November.

The first of the main features is a five page spread on the work of the Tresviso Caves Project in the Picos de Europa, in northern Spain. A total of 7km of passage was surveyed in 2018, of which over 2.5km was new. The follow-up expedition ran from 31st August to 14th September this year and a report will appear in a future Descent.

The annual report of cave rescue incidents comes next. There were 19 underground incidents in which 41 people were assisted. Thankfully there were no fatalities. These figures do not include the international assistance given to the Thailand rescue, where a further 17 people were helped. Meanwhile, the biennial cave rescue conference Rescon, took place at Ebborways Farm on Mendip in September. Peter Glanvill and Martin Grass report on a highly successful event including talks and demonstrations, underground workshops and the annual Wessex Challenge obstacle race.

John Gunn has been studying the hydrology of the Castleton caves, in Derbyshire. He now has more data but more work is needed before the peculiar changes in flow seen here can be fully explained. On Mendip, Clive North describes using a maypole in Thrupe Lane Swallet.

In international news, a team from the Black Rose CC undertook a reconnaissance expedition to Armenia where they explored and surveyed the third longest cave in the country (Dghdghnatsak 578m). Sadly they didn’t find any of the rumoured dragons! Martyn Farr returned to the Bahamas after 37 years and has written a lavishly illustrated report on some of the stunningly decorated caves on Abaco Island.

Don’t miss the caption competition, as there’s an excellent prize of a Boreo caving helmet and a top-of-the range Duo S headlight, together worth £480!  Speleo Reader has the usual round-up of books featuring the underground, including the remarkable story of a 1970 British expedition to the Himalayas in a double decker bus!

Every issue of Descent is impressive, and this is no exception to that rule. Descent is produced by cavers for cavers and is excellent value for money. Copies can be obtained from Wild Places Publishing. Take out a subscription now and if you already have one, check that yours is up to date!