When we at DB Towers received our copy of Robin Taviner’s Somerset Underground Volume 1, we were intrigued to learn that one site that he had been unable to visit was Bucklewell Cave in the Avon Gorge. We therefore approached Paul Warrilow, who has studied the site over many years, and asked him for an account of this little-known cave with an interesting history.

Bucklewell Cave is approximately 10m above the River Avon high tide mark, in the north cliff of the Horseshoe Bend, Shirehampton (ST.5379 7658). The roof of cave is formed by a 4m-thick bed of Dolomitic conglomerate. Two small fresh water springs cut the cavity in the lower, softer Triassic Marl. The uneven support resulted in the cantilevered conglomerate breaking laterally from its matrix and again, vertically through the roof of the cave. The top of the conglomerate bedding plane has been modified, including a drystone retaining curb following the curve of an Early Bronze Age timber circle that stood 1m above. The low roof (1.5m maximum clearance) restricts access to a bowed or ‘buckled’ attitude. The mouth of the cave, currently 7.90 wide, was originally over 12m. Approximately 4m is walled off. Barely accessible, the wall appears to be drystone work. A further section of mortared masonry was added at a near 90-degree angle, effectively sealing off this area of the cave (A in the plan below). A semi-circular structure of mortared masonry was added at the very back of the cave, below the crack in the roof (B). The mortar used is indistinguishable from that used in the property boundary wall of The Powder House, 10m to the west, and built in 1749.

In 2007, a drainage ditch dug above the cave unexpectedly revealed terracing in the underlying conglomerate bedrock and a layered sequence of Early Bronze Age archaeological deposits, including small circular stone settings, a timber circle and an unfired vessel containing coloured clays, ash, charcoal, pottery and burnt animal bone. A second trench, added along the cliff top 10m to the west, showed further structures including a linear post or pit alignment, continuing in the direction of a possible swallet in the adjacent paddock.

The fragile pottery alone verifies the undisturbed Early Bronze Age archaeology. The clays, sourced directly from the site and fired at low temperatures, would not have survived weathering and ploughing.

The position, size and orientation of the Early Bronze Age timber circle followed the underlying geology. The fissure in the cave roof/conglomerate bedrock, demarcated both the centre of timber circle and its mid-summer sunset/mid-winter sunrise axis. 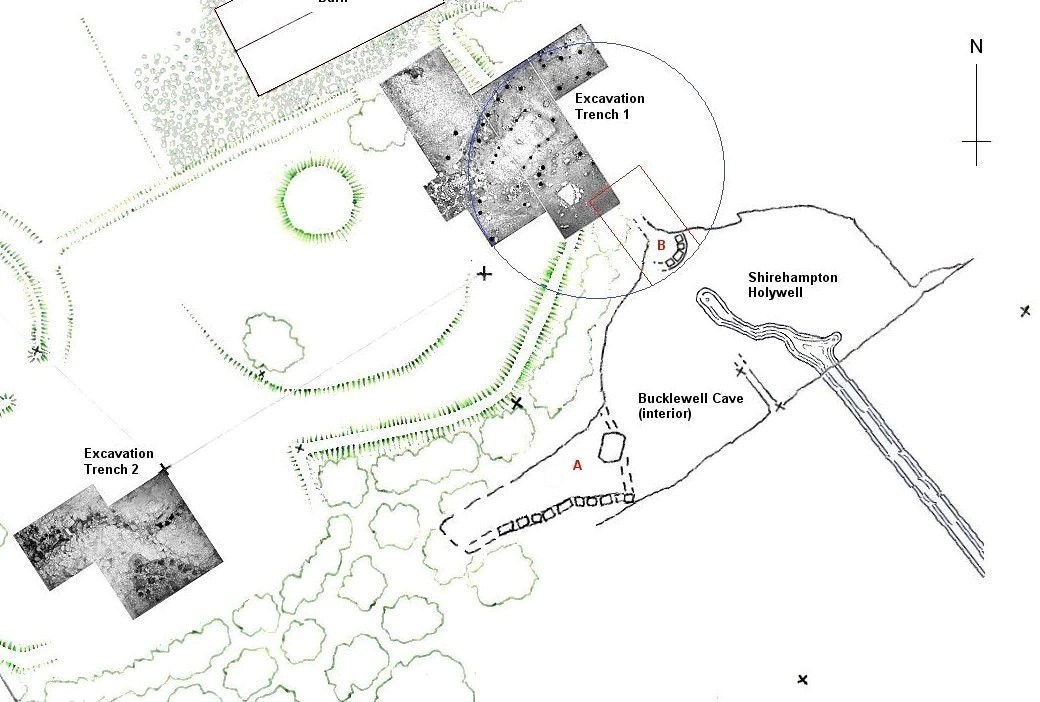 Around 1750 AD, the rectangular cellar for a root vegetable shed was dug through the prehistoric archaeology and lined with small pieces of carboniferous limestone. A backfilling of soil included a collection of clay tobacco pipes, part of the inner ear bone from an arctic bowhead whale and the porcelain leg from a male doll/action figure. There are also galvanised metal straps of a size similar to those used on the 6.25lb kegs provided by Bristol’s gunpowder industry for the Africa trade, plus Staffordshire-style slipware, wrought iron and copper nails, and hinges/other hardware. One of the pipe bowls was marked T GRANT who produced pipes between 1748-1751, matching the 1749 construction of the Fulligrove Gunpowder Magazine and the beginning of Bristol’s whaling industry at Sea Mills in 1750.

What we have is a site with two defined periods of use, in the Early Bronze Age and the 18th Century. In both periods the presence of the cave and its fresh water springs seems significant in the choice of the site. Why two communities, thousands of years apart and thousands of miles apart in origin, cleared the ground above the fissure that runs through the roof of the cave and both built structures based on its physical length and directional orientation is beyond me. I can only presume that both communities shared at least aspects of a similar cosmology. That the activity coincides with the beginning and end of the importance of the Lower Bristol Avon in international trade may also be part of the answer.

It’s an interesting site and one which may repay further archaeological study.

(Edited on 11th December 2020 to correct the size of the gunpowder keg.)