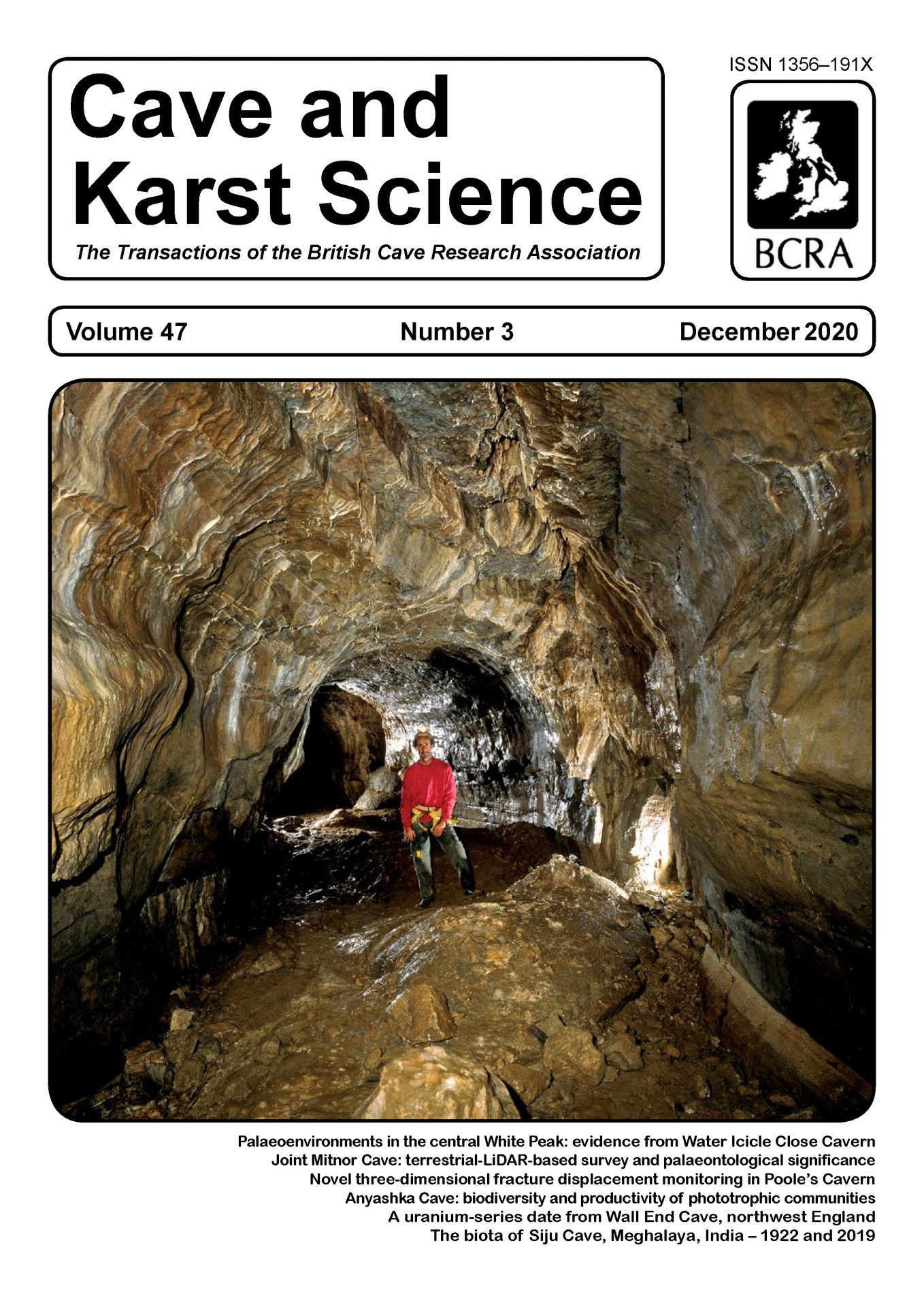 The latest issue of Cave and Karst Science kicks off with two detailed biological papers, detailing work in Meghalaya and the Caucasus. Other papers are based on work in the UK and include LiDAR survey, fracture displacement monitoring and Palaeoenvironmental studies.

This issue contains six major papers. The first two are concerned with biological studies. Dan Harries, Ilona Jacinta Kharkongor and Uttam Saikia report that Siju Cave in the Garo Hills of Meghalaya, India was the subject of a meticulous and detailed biological survey in 1922. The cave was re-visited and the biota documented in 2019. Observations made in 2019 were compared to those reported from 1922 and placed in context by comparisons to observations made in other Meghalayan caves. In many respects the biota resembled that recorded in 1922 but two key differences were noted. Firstly, in 2019 the bat population and the extent of the associated guano deposits were noted to be considerably reduced relative to those described from 1922. Correspondingly, the abundance of the guano-associated biota appeared considerably reduced from that of 1922. Secondly, in 2019 a distinctly troglomorphic cockroach was found to be abundant throughout the cave. This cockroach was eyeless, totally lacking in pigmentation and had pronounced elongate antennae. It is inconceivable that it would have been overlooked in 1922, so it can only be concluded that it was not then present in the accessible areas of the cave.

From the Caucasus, Svetlana E Mazina, Anna V Popkova, Valentin P Zvolinski and Akhmed K Yuzbekov present the results of an investigation of species composition, structure, and productivity of phototrophic communities from Anyashka Cave. The dominant group of phototrophs colonizing cave substrates were cyanobacteria, and the most frequently encountered cyanobacteria were species from the genera Chroococcus and Leptolyngbya. Differences between species composition in zones relative to the water flow were revealed. Measurement of gross primary production (GPP) in the daytime during the spring–summer period enabled collection of data on the maximum productivity of communities. Estimates of the GPP of phototrophic communities developing on different substrates vary from −0.1503 gC/m2h to −0.0109 gC/m2h. The highest GPP was recognized in communities with a predominance of Pteridophyte and Bryophyte species on water-splashed clay. However, similar communities developing on other substrates (limestone, clay on limestone) displayed lower GPP. Thus, significant impact of substrate type on the communities’ productivity was demonstrated. Net carbon flux values showed that at peak productivity not all measurement sites acted as carbon dioxide sinks; some sites functioned as carbon dioxide sources.

Back in Britain, Guy Van Rentergem, Donald A McFarlane and Joyce Lundberg present the first detailed, modern survey of Joint Mitnor Cave, Buckfastleigh, Devon, UK. The cave is an extremely important Last Interglacial palaeontological site because it is the type site for the hippopotamus-dominated British Pleistocene mammal assemblage of that period, “The Joint Mitnor Cave Mammal Assemblage Zone”; and because it is the least damaged Last Interglacial cave bone bed still remaining in Britain. The survey, meticulously drawn from terrestrial LiDAR scans, offers a precise (± <3mm 3D 1 δ) view of the cave, and can act as the base map for future conservation projects and other studies.

Phillip J Murphy and Gina E Moseley present A uranium-series date from Wall End Cave, Silverdale, northwest England and discuss its palaeoclimatic and archaeological significance. Uranium-series dating of a stalagmite floor from a relict cave in the Morecambe Bay karst indicates speleothem deposition occurred between 13,567 to 8539 years BP. Comparison with other cave archaeological sites where a stalagmite floor occurs in a similar stratigraphical position suggests the first human occupation of the region following the Last Glacial Maximum may have occurred in the early part of the Windermere/Late Glacial Interstadial.

The final paper in this issue discusses Palaeoenvironments in the central White Peak District, Derbyshire drawing on evidence from Water Icicle Close Cavern. John Gunn, Ian Fairchild, Gina Moseley, Paul Töchterle, Kate E Ashley, John Hellstrom and R Lawrence Edwards describe the research. Both the distribution of mapped glacial landforms and ice sheet modelling point to an absence of ice over the White Peak during the last glacial period, but intermittent permafrost conditions are expected. Water Icicle Close Cavern is an ancient cave system in the central White Peak that is thought to have been drained for several hundred thousand years and in which the main level of development is around 100m above the present base level of drainage. In 2009 a newly entered section of passage in the cave was found to contain extensive broken speleothem, together with sediments that included possible solifluction deposits and lag gravels. Ice that formed in the cave is considered to be the most likely cause of speleothem breakage and must have completely filled cave passages for shearing of stalactites to have occurred. Melting of ice is thought to have resulted in the removal of some fine sediment, leaving the lag gravel. Uranium-series dating demonstrates a record of speleothem growth in the 96–49ka interval interrupted by a speleothem breakage event between 87 and 83ka. This is interpreted as being related to in-cave ice growth that was associated with wet periglacial conditions. Oxygen and carbon isotope data show a rising trend consistent with cooling and drying before the breakage event, with breakage following a dense, slowly growing lamina. Post-breakage the δ18O values were −3 to −4 per mil and the δ13C values were −8 to −10 per mil, which compare with cool-climate speleothem data in Yorkshire. Textures suggest that the speleothem grew intermittently during this time of cool hemispheric conditions from MIS (Marine Isotope Stage) 4 to the beginning of MIS 3.