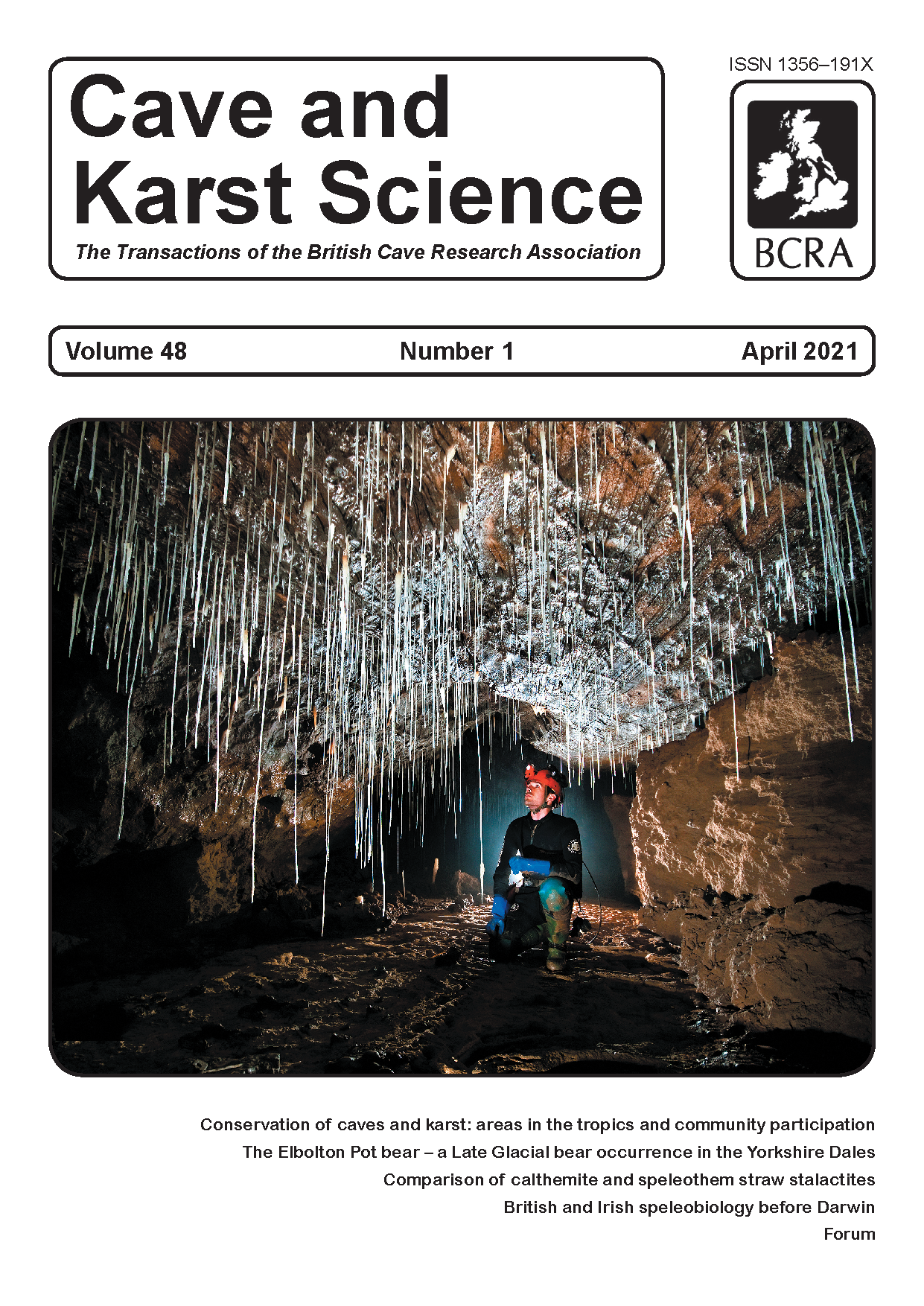 The latest issue of Cave and Karst Science opens with a comparison of straw stalactites in caves and those beneath bridges and buildings. Later papers include work on conservation in the tropics, bears in late-glacial Yorkshire and an account of early speleobiological work.

The issue contains four major papers. in the first, Garry K. Smith investigates environmental conditions that influence the morphology of calthemite straws and draws comparisons with speleothem straws. Calthemite straws are typically deposited beneath buildings, bridges, and other concrete structures from hyperalkaline solution (pH > 9), in contrast to speleothem straws that are deposited by near-neutral to mildly alkaline solutions (pH 7.5 – 8.5). On average, calthemite straws tend to have a smaller outside diameter range of 3.7 to 5.4mm compared to speleothem 4.5 to 6.45mm. Comparisons of straw mass per unit length revealed that on average calthemite straws were 40% the mass of speleothem straws of equivalent outside diameter. The calthemite straws had a much thinner wall thickness and were more fragile to handle. Their fast longitudinal growth (up to 2 mm/day) and thin wall thickness appears to be due to the rapid reaction of atmospheric CO2 with Ca2+ in solution at the drip surface. This results in deposition of CaCO3 around the straw tip, with little CO2 diffusing up the solution canal, thereby lengthening the calthemite straw with limited CaCO3 deposition in the solution canal. Solutions from slower drips have a higher saturation and deposit more CaCO3 per kilogram of solution (e.g. as a stalactite and/or stalagmite), than solutions from straws with faster drip rates. As drip rates and calcium ion saturation of drip solution vary greatly beneath a structure over time and location, the analysis of drip solution is not a reliable method to determine concrete’s degradation rate.

Dave Gill examines conservation of caves and karst areas, along with direct local community participation using a systematic and practical approach. Potential threats and solutions are discussed along with community cooperation that will bring financial benefits to the community via long-term sustainable tourism products. Poaching is the major threat to conservation in sub-tropical and tropical areas, but total involvement from the community will ensure protection in the long term. The concept is one of people’s parks, co-managed by the local community and the relevant government agency, who own and administer the area under the specific law or, in some instances, a private concern. The paper is based upon experience of hands-on conservation work on caves and karst areas in the tropics and sub-tropics over an extended period.

Phil Murphy and Andrew Chamberlain discuss a radiocarbon date obtained from a partial, juvenile, bear skeleton recovered by cavers from Elbolton Pot. This confirms that bears were both present and breeding in the Wharfedale area during the Late Glacial/Windermere Interstadial. This study highlights the importance of curating bone finds made by sporting cavers, because they have great potential to contribute to palaeontological, archaeological and palaeoenvironmental studies.

In the final paper in this issue Max Moseley traces the pre-Darwinian history of British and Irish speleobiology from the folklore era until 1859, within the context of the overall development of the discipline. Sporadic ‘scientific’ observations of subterranean organisms were made during the Enlightenment period of the 17th and 18th centuries. The first ‘well shrimp’ known to science was found in London in the early 19th century, though its significance was not perceived immediately. In 1801 The Royal Society of London was instrumental in bringing the iconic olm (Proteus anguinus) from near obscurity within the English-speaking world to the attention of an international audience of naturalists and lay public. The blind, depigmented ‘troglobites’, discovered on the Continent and in America from the 1830s onwards were known and discussed in the British Isles but not within an evolutionary context. In contrast, blind cave animals were put forward in support of creationist doctrines during the Faith versus Reason conflicts of early Victorian times. The 1850s saw the first, albeit unsuccessful, efforts by creationist naturalists to find similar forms in caves in the British Isles. Their focus was on ‘troglobites’; other less-specialized subterranean animals were ignored, although that had not been the case in a key early report from Europe. Meanwhile, several new ‘well shrimps’ were discovered in England, but the ecological continuity between animals found in wells and those in caves was not yet understood. Finally and briefly, some ways in which pre-Enlightenment and anthropocentric attitudes to caves and their inhabitants influenced the later development of speleobiology are discussed.

The issue is completed by the Forum section which contains abstracts from the BCRA Cave Science Symposium held in November 2020 and some correspondence and correction about previously published papers.