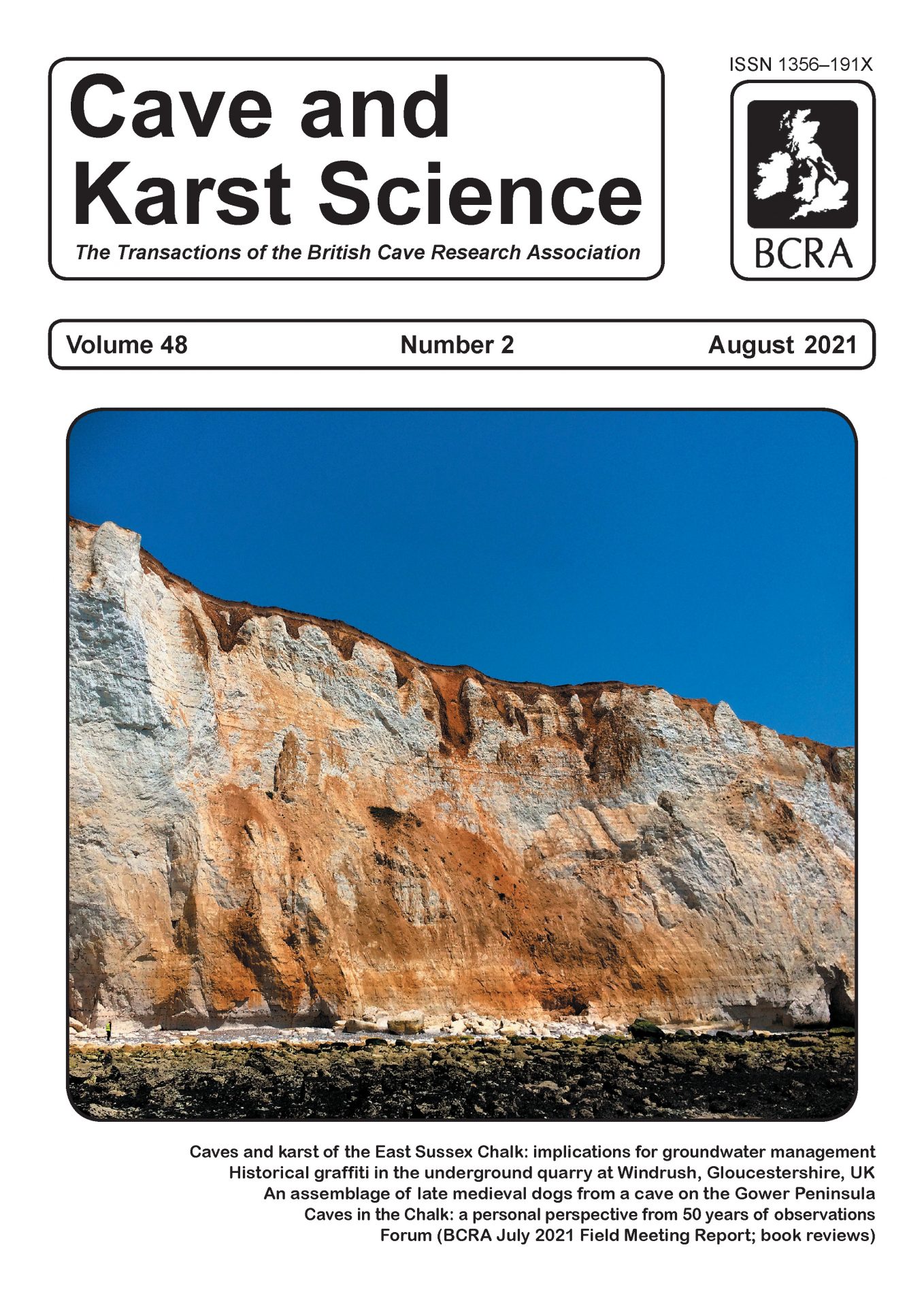 The latest issue of Cave and Karst Science is dominated (the editors’ word!) by karst and caves within the English chalk. There are also, though papers on aspects of cave archaeology, including historic graffiti in an underground stone quarry and the excavated remains of domesticated dogs from a cave on the Gower peninsula.

An informative feature article by Terry Reeve, dealing with the results and observations from 50 years of work exploring the southern English Chalk and its associated karst (and coastal) caves, finally completed its gestation just in time to share the Issue with a more in-depth examination of aspects of Chalk karst in East Sussex, based upon observations and interpretations by Andy Farrant and six co-workers. The latter paper focusses on the links between the development of karst conduits, including caves, and elements within the Chalk stratigraphy that have been recognized as inception horizons. The importance of this recognition and the increased capacity for dissolutional conduit growth that these beds provide is described, with particular reference to their potential relevance to groundwater management studies. Putting aside the central theme of Terry’s paper (simply that, contrary to widely-held opinion, the English Chalk is both karstic and cavernous) and the scientific importance of the more tightly focussed work by Andy and his colleagues, it is interesting to compare two different approaches to the exploration and the appreciation of this relatively under-studied element of the English Chalk, which crops out over around 19,000 km2 and was described recently (again by Andy Farrant in an on-line BCRA-IYCK seminar) as “Britain’s most important karst region”

While, arguably, a paper by John Cooper and David Hughes and an initial report by Joe Duxbury and Jon Maisey both relate to aspects of underground archaeology, they look at widely separated aspects of the topic.

The Duxbury and Maisey report concerns a closely linked group of underground stone quarries rather than a natural cave and gives initial examples of how graffiti may be used as keys to open the way into broader historical research. This complements work on graffiti in caves and mines in the Peak District reported in CaKS 42(3) and a talk by Linda Wilson in the May BCRA-IYCK Seminar: “The Writing on the Wall: historic graffiti in caves and mines “. Underground graffiti are, of course, widespread (some would say “too widespread”) but for researchers with interests in the many aspects of social history it seems that at least some of these fossilised utterances may have great potential value.

Equally fascinating but in different ways, the paper submitted by John Cooper and David Hughes presents early results relating to the excavated skeletal remains of more than 50 domesticated dogs that have been recovered from fill within a karst cave on the Gower Peninsula in South Wales. Just as in the case of further thoughts that may be inspired by studying cave graffiti, this topic presents abundant food for speculation about the “when”, the “how” and the “why” of this massive accumulation. Interesting as the initial findings and comments are, hopefully many more results than those – already intriguing – that are presented in this early paper will eventually be described.

Also included in the issue is a five-page edition of the Cave and Karst Science Forum. Firstly, there is a two-page description of the July 2021 BCRA Field Meeting at Arnside and Silverdale in north-west England, including a variety of photographs taken on the day. The remaining pages are devoted to four book and journal reviews.