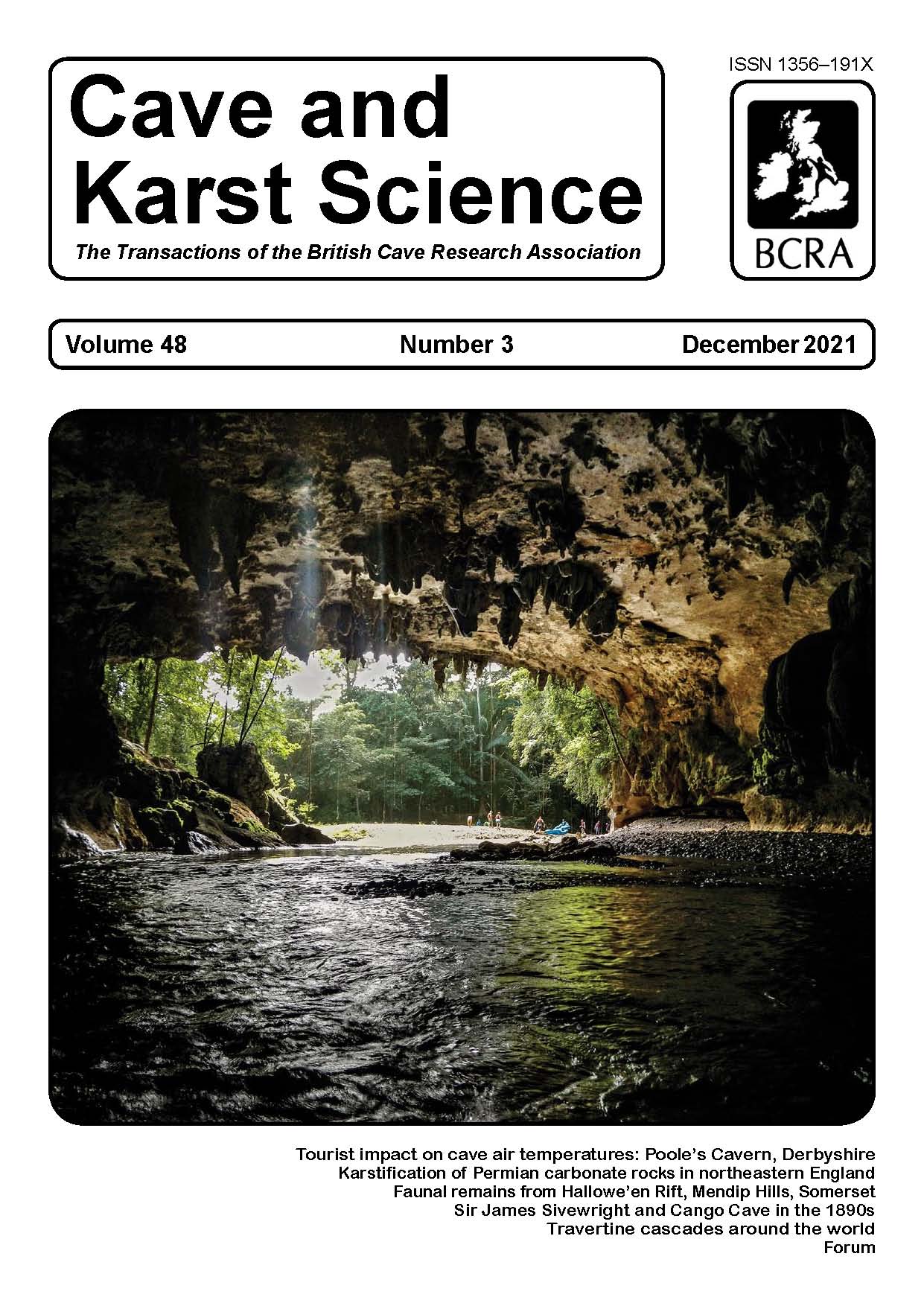 The latest issue of Cave and Karst Science opens with a study of the impact of tourists on air flow in Poole’s Cavern. Later papers include a review of karstification of Permian limestones in northeastern England and a pictorial overview of travertine cascades from around the world.

John Gunn, Matt Rowberry and Andrew Smith present a short case study using open access cave climate data collected at the British Cave Science Centre (BCSC) in Poole’s Cavern, Derbyshire. This paper is a short case study of how the data may be used. Air temperature is measured at fourteen locations, two outside the cave and twelve inside, at each of which there is a thermistor linked to a radio data logger. The in-cave stations are at increasing distance from the entrance and most are within 3m of the tourist path. In 2020, following Government advice in relation to the Covid-19 pandemic, the cavern closed on 18 March and reopened on 20 July, giving an ideal opportunity to study the impact that normal operation of the show cave has on cave temperature dynamics. Temperature data at 10-minute intervals for this period, and for the same dates in 2019 when the cave was open, were extracted from the BCSC database. Seven measurement points were chosen: outside the cave; at the cave entrance; at about 10m, 75m, 125m and 150m from the entrance along the tourist path; and at SEP, a station about 25m from the tourist path in a side passage. Outside the cave the average air temperatures in 2019 and 2020 differed by <0.1ºC and the maxima and minima differed by <1ºC. In 2019 there were clear short-term variations in air temperature at the 75m, 125m and 150m sites that were caused by visitors during the passage of tours. However, absence of tourists during lockdown did not result in a significant change in the overall cave temperature.

Phil Murphy and David Lowe have been looking at karstification in northeastern England. Carbonate strata within the Upper Permian succession of this area are locally karstified. All cave passages explored to date are either relict phreatic features or tectonic cavities, and all are of limited length and depth. No active conduits have been identified or entered. Generally, the caves are accessed through natural (sub)vertical sections exposing the carbonate beds or via man-made excavations. Evidence of ongoing active karstification is, however, recognized, so future karstological investigations of these carbonate outcrops might discover more diversity than that indicated by the known relict caves.

Steve Craven discusses aspects of the early life of Sir James Sivewright in Britain and his political activities in South Africa during the late Nineteenth Century. Evidence suggests that Sivewright’s influence on the development of Cango Cave, South Africa’s best-known show cave, was beneficial.

Vince Simmonds reports on a faunal find from Hallowe’en Rift, on Mendip. During 2011, a small-scale excavation in Toil and Trouble, located in the lower series of passages in this cave, recovered a single animal bone from the fine-grained sediments. The bone was later identified as Bison priscus 1st phalanx. In April 2019, the bone was sent for radiocarbon dating but, unfortunately, this was unsuccessful because there was insufficient collagen in the sample. However, there is supporting evidence to suggest that the find is of Pleistocene age and adds Hallowe’en Rift to the existing list of Mendip caves that have yielded ice age mammalian faunas.

In the final contribution to this issue, Tony Waltham presents a pictorial overview of some of the world’s finest travertine barrages and cascades. Carbonate travertine is polygenetic, both chemical and organic, and both karstic and geothermal, with a full range of sites between those extremes.