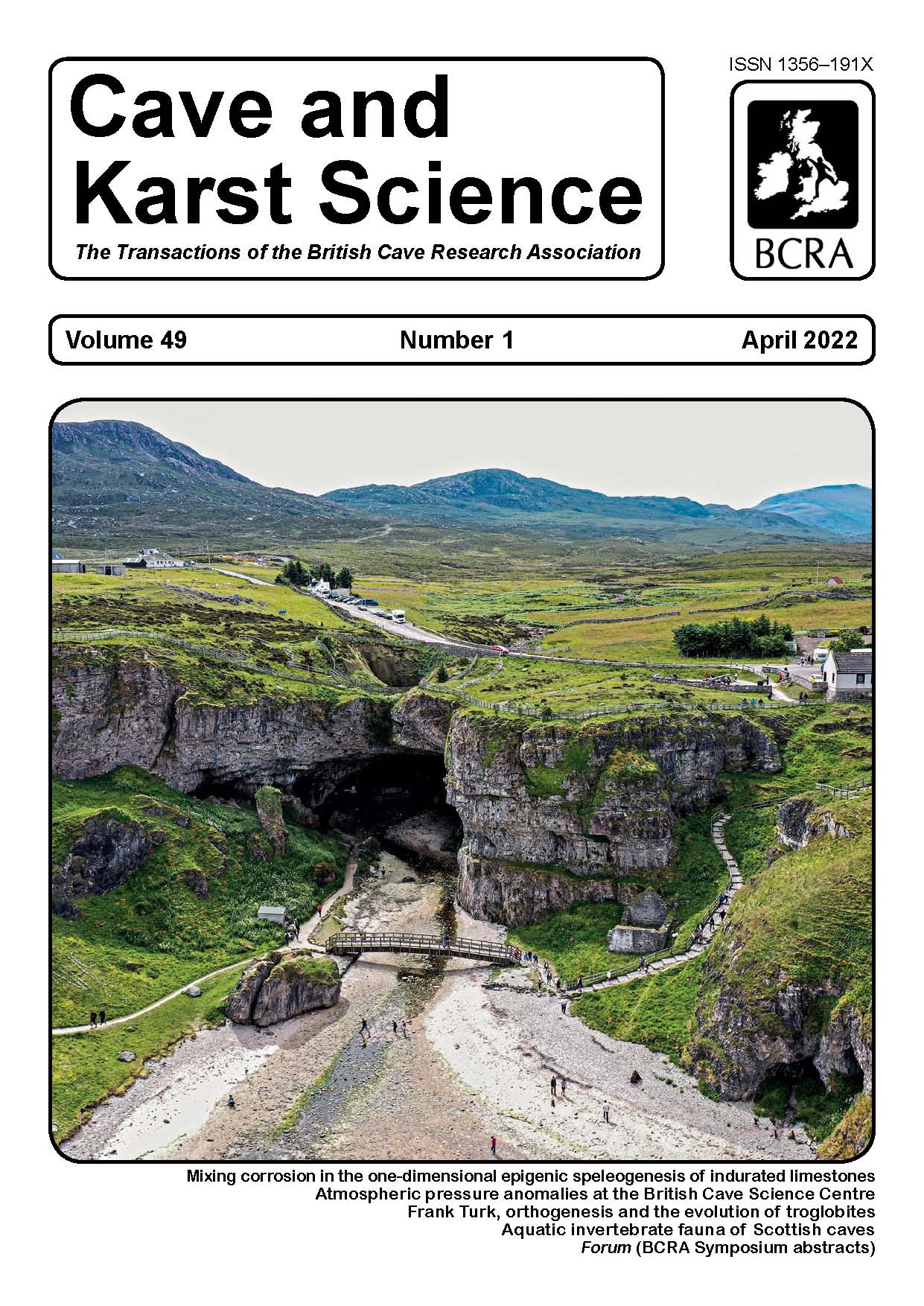 There are four major papers in the latest issue of Cave and Karst Science, two looking at different aspects of invertebrate fauna in caves, one studying mixing corrosion in indurated limestones and the last showing an unusual result from the monitoring stations at Pooles Cavern.

Lee Knight and colleagues have carried out a descriptive survey of the aquatic invertebrate fauna in caves across various regions of Scotland. Most of the vadose streams in the Scottish cave systems investigated were allogenic in nature and hence were dominated by aquatic invertebrate assemblages of benthic taxa presumed to have drifted in from the surface. Lentic habitats harboured less-diverse communities, often dominated by large numbers of Oligochaeta, Ostracoda and Copepoda. The latter two groups are mostly very small (1–3mm) animals that generally prefer slower flows and more sheltered conditions. Several, possibly stygophilic, populations of copepods and ostracods were recorded in pools and perched sumps in higher level passages, above normal water levels. The stygophilic ostracod Cavernocypris subterranea was recorded from four new sites in the Assynt and Appin regions. Specimens in the ostracod genus Fabaeformiscandona, tentatively identified as Fabaeformiscandona latens, were recorded in two caves. Although the collection of additional specimens is required for confirmation, these records of F. latens could be the first documentation of this stygobitic species in the British Isles.

A more historical take on troglobitic fauna has been taken by Max Moseley who examines an example of a now outdated take on evolution. As late as 1969 the British arachnologist Dr Frank Turk remained deeply sceptical of the widely-accepted Modern Evolutionary Synthesis in relation to blind cave animals. He thought that a morphologically-anomalous juvenile millipede (Nanogona polydesmoides) collected in a cave in North West England might be one of the hypothetical “hopeful monsters” of the saltationist geneticist Richard Goldschmidt. This very common species is an established member of the British subterranean fauna, and specimens collected underground are reported to have a reduced maximum number of ocelli compared with those from epigean habitats. The specimen (now lost) is herein assumed to have been merely a reproductively-nonviable teratological mutant. Turk also endorsed orthogenesis and expressed sympathy with the extreme theory of “gerontocratic” evolution in cave animals proposed by the prominent French speleobiologist Albert Vandel. Turk’s non-Darwinian evolutionary ideas were not novel and they had no discernible impact, but his views do serve to highlight and characterize difficulties that many speleobiologists have had in understanding or accepting natural selection. Turk’s contributions to British speleobiology in the post-war decades are also reviewed and briefly assessed. This paper is a contribution to the history of British speleobiology, with a history and philosophy of science perspective.

Trevor Faulkner has been studying the role of mixing corrosion (MC). This occurs in limestone where saturated and unaggressive streams with differing amounts of dissolved carbon dioxide and calcium carbonate mix and become aggressive. This arises from the non-linear relationship of calcite solubility with the CO2 partial pressure (PCO2) in solution, whereas mixing is a linear process. Recent studies explore MC and speleogenetic inception within high matrix and/or fracture permeability karst, commonly restricted to mixing at equal temperatures, using two- or three-dimensional models. However, a one-dimensional approach remains important for karstification along long flow routes in indurated limestones with negligible primary porosity and low fracture density, where early MC might apply and be influenced by varying temperatures. Dissolution and any late MC after phreatic conduits reach maturity is also essentially a 1-D process, because other permeabilities are then insignificant. When MC occurs in phreatic conduits closed to resupply of CO2, there is a complex relationship between the PCO2 in solution and that in the upstream cave air. However, during speleogenetic inception, only the palaeo cave air PCO2 can be estimated directly.

This paper derives the relationship between PCO2 in solution and that in the cave air and uses mixing equations to determine the chemistry of the mixed solution. The MC possibilities are scoped by applying graphical and mathematical methods to the four extremes of mixing two saturated streams that have different cave air PCO2 and temperature in completely open or completely closed conditions. These show that MC can cause either pre- or post-chemical breakthrough aggressivity, validating a previous conjecture that MC might cause fast dissolution rates and therefore could be key to speleogenesis. Post-breakthrough MC just occurs where the mixing line is tangential to the kinetic trigger concentration curve, at which point the calculated chemical and flow ratios are ultimately determined by the kinetic trigger fraction for the new mixed temperature. The conjecture is valid for wide ranges of conditions, especially at high but different temperatures where a closed conduit with the lower initial PCO2 has the greater flow rate. However, mixing two saturated waters cannot cause an ultra-fast rate law regime to be entered, which occurs in dilute solutions that are ≤20% saturated. These findings are discussed with estimates of the climatic conditions in karst environments in relevant geographical regions during the glacial, deglacial and interglacial stages of the Quaternary. One-dimensional epigenic speleogenesis in indurated limestones can be greatly accelerated by MC in many environments, especially in, but not limited to, warmer climates.

Finally, Matt Rowberry and John Gunn report on atmospheric pressure anomalies at the British Cave Science Centre triggered by a catastrophic volcanic eruption in Tonga on 15 January 2022. The eruption destroyed the Tongan island of Hunga Tonga–Hunga Haʻapai at 04:14 UTC on 15 January 2022. This event triggered a series of enormous ripples that spread out across the Earth. Atmospheric pressure observations recorded outside and inside the British Cave Science Centre at Poole’s Cavern, Derbyshire, present evidence for two phases of anomalous behaviour between c. 18:30 and 20:30 UTC on 15 January and c. 01:30 and 02:30 UTC on 16 January. These are thought to have been initiated by a Lamb wave circling the Earth. Visual inspection also identified a series of smaller perturbations repeating approximately every six hours until 17 January and renewed instability culminating on 19 January. In contrast, automated anomaly detection pinpointed only the larger anomalies on 17 and 19 January. Further research is needed in order to confirm the existence of these later anomalies and better to understand their relationship with the volcanism in the southern Pacific Ocean.