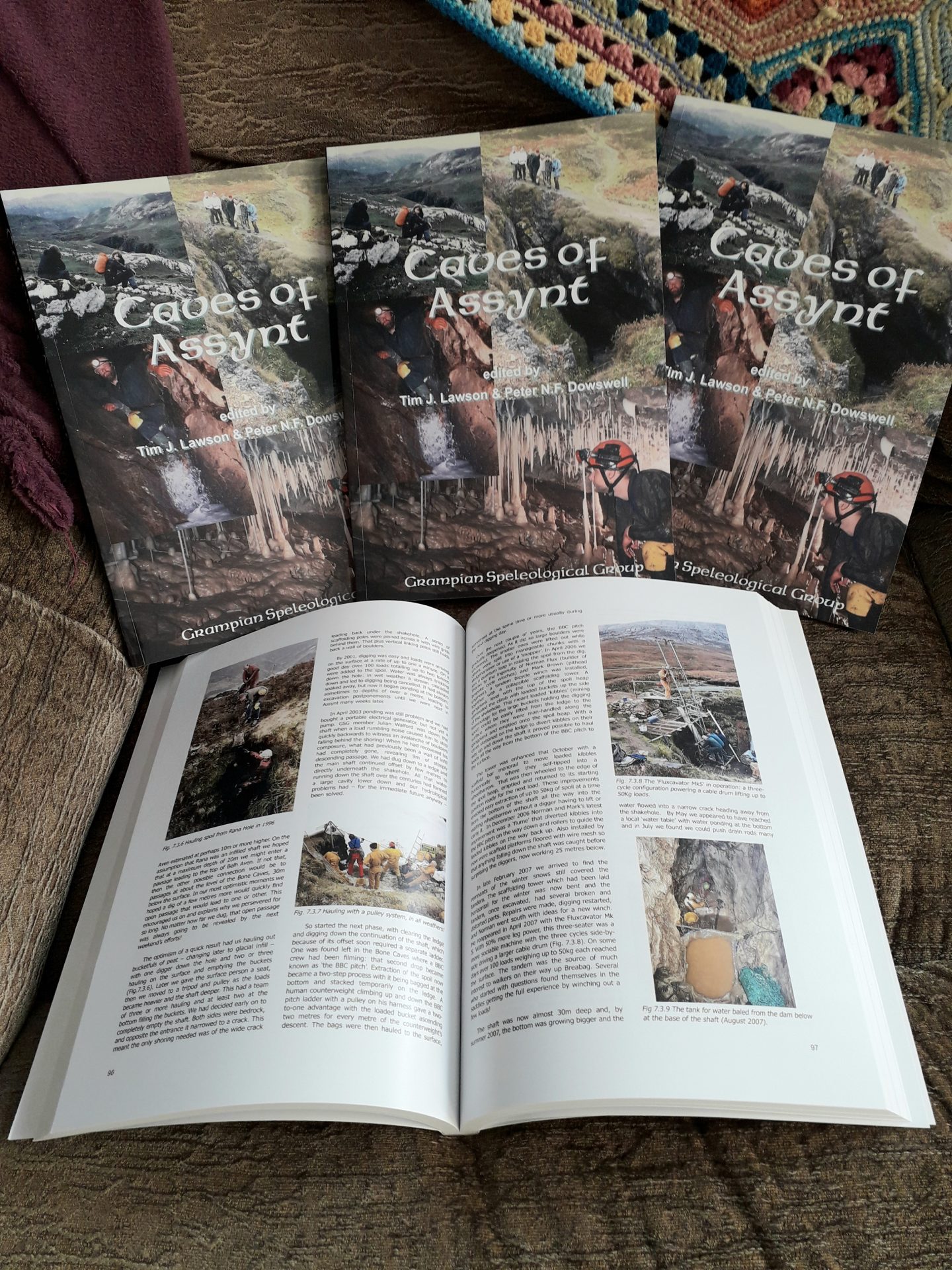 The Grampian Speleological Group (GSG), Scotland’s premier caving club, has a long history of producing guides to the country’s caves; indeed this is third edition of a guide that was first published in 1972. However, in another sense this is a new departure. Previous editions were very much home-produced, but this has been laid out by co-editor Tim Lawson using modern DTP software and professionally printed and bound.

Caves of Assynt covers the caving areas of western Scotland, from Ullapool to the north, for some 35km. This takes in the main caving areas of the Traligill basin, the Allt nan Uamh basin and the Knockan area as well as several more minor areas both north and south. The major chapters carry detailed descriptions of all the caves plus historical accounts of their discovery and exploration. In addition to these aspects, the book also has chapters on the geology and geomorphology of the main areas, on palaeoclimatic studies undertaken using speleothem data and on cave biology. The book is a comprehensive guide for anyone wanting to visit and understand the caves of the area.

Produced at A4 paper size, it is somewhat larger than the recent run of cave guides. A decision on size is always a compromise; the larger size allows for larger maps and surveys but makes it harder to carry around in the field. The large page size has also led to the text being arranged in two columns. The text is liberally interspersed with colour photographs. Personally, I would have preferred to see larger images, even if that had meant fewer of them. Some of the smaller ones are lacking in detail, though overall the quality of reproduction is good.

The area maps show the locations of the caves on Ordnance Survey base maps and are excellent. They were produced by Bob Jones using a GIS system so one can guarantee that the position of a cave entrance on a map is as good as it can be from the available grid reference. The surveys are rather more variable. The more modern ones are clear and well executed but some of the older ones have been taken from old paper originals. Some have been redrawn or relabelled, but some have not. According to the editors’ foreword, “no concerted attempt to redraw all the surveys in a ‘house style’ was made so many retain ‘quirks’ …” This is true, and in some cases, the text labelling is quite small and difficult to read. This is one of very few flaws in an otherwise excellent book.

This third edition was first mooted in 2011. Not only was the previous edition long out of print but continued exploration in the area had considerably expanded what needed to be included. That process has continued for the past decade resulting in the need for frequent revision of cave descriptions. It was only in 2020 when Tim joined Peter as co-editor and, perhaps, as the pandemic slowed down the rate of new discoveries, that the project could be brought to completion. A vast amount of work has gone into this book; six main authors and no fewer than 18 photographers are credited along with countless unsung surveyors and explorers, all of whose work has come together in one imposing volume.

Caves of Assynt is a book for all cavers with an interest in Scotland. It is available directly from the GSG, email orders to the chairman .The price, shown below, does not include p&p, this currently £4.50 for the softback. The hardback postage rate is not yet known.