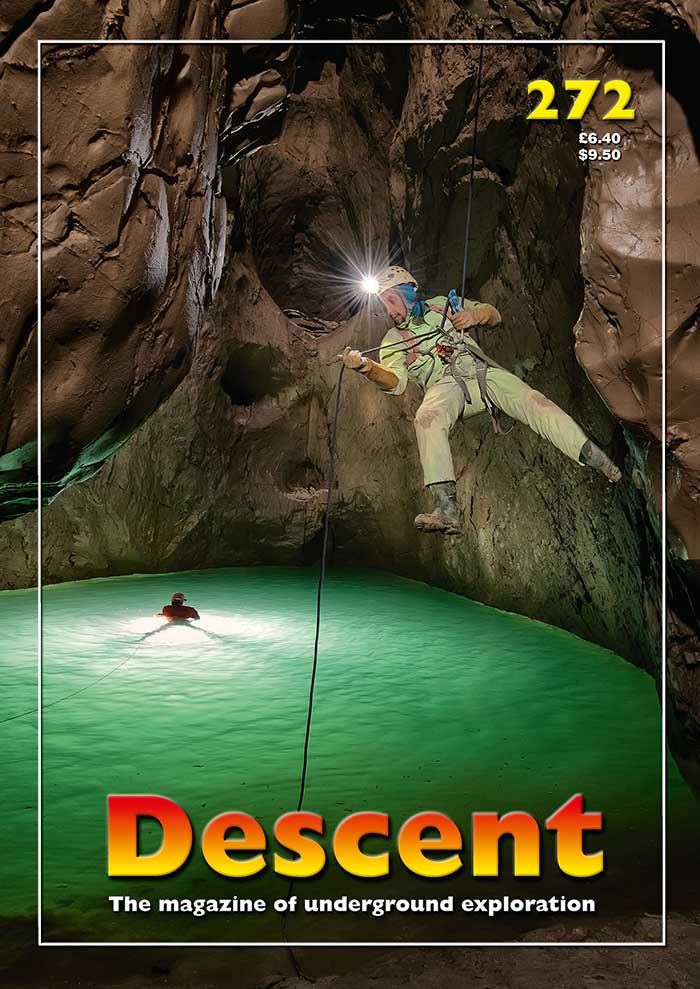 Descent 272 has now arrived! If a copy hasn’t reached you, it’s time to head over to Wildplaces Publishing to subscribe now or if you’re lucky enough to have a caving shop anywhere near you, call in and get one from them. If you’re keen to keep up with what’s happening in the world of caves and caving, then Descent is the magazine for you!

As usual, Newsdesk provides a very wide spread of information. The Tham Luang rescue features once more, with mention amongst other things of the sad death of Thai navy SEAL Beiret Bureek who contracted a blood infection during the rescue and died late last year.

There is a paragraph outlining the results of the BCA’s ballot on its voting system, announcing that the ‘Two House’ system has now been abolished. BCA secretary Matt Ewles gave Descent a statement, part of which said: “Caving clubs of course remain a cornerstone of British caving and this is not intended to devalue them.” Doubtless we’ll see how the new system operates in the coming months and years. A further piece of BCA news is the increase in their public liability insurance cover to £10 million. In an even more momentous change for British caving, it is announced that Caving Supplies has been put up for sale. It is hoped that a buyer will be found.

Various future events are announced, including a cave surveying course in South Wales, the 28th International Karstological School in Postojna and an international Speleocamp for young cavers in Germany. Among new caves discoveries are Witches’ Pantry Cave in Colorado and a cluster of 19 caves in Guanxi, China, near the Vietnamese border, described as immense. And a discovery of Upper Palaeolithic artwork on the island of Sulawesi has been dated to 44,000 years old. This date is incredibly early and challenges a number of hitherto strong hypotheses about human evolution.

Regional news starts with reports from the Forest of Dean. Sadly, the positive news about water tracing and a generous donation to the Gloucester CRG is offset by stolen padlocks and damaged gates, both on caves and on non-cave bat hibernation sites. It is possible that during this period some geological specimens were stolen from Miss Grace’s Lane Cave. There is better news from the Peak District where access to Snelslow Swallet has been restored following a massive clean-up effort by volunteers. More volunteers have been working on improving the car park for Waterways Swallet, but this is probably best avoided until the ground dries out. In caving news, the Eldon have made a breakthrough in Intake Dale Mine. At time of going to press, this was still being explored.

In Scotland, the indefatigable Toby Speight and others have discovered Uamh na h-Aiseirigh (Ashery Pot) downstream from Poll Breugair and another link in the drainage of the Applecross valley. Teamwork has paid off in the Dales with significant progress at Malham Cove Rising by a strong team of divers. Sadly, however, there are two deaths to report; Steve Thorpe a life member of the Northern Pennine Club died suddenly in November and Simon Halliday sadly lost his life on a dive in Lancaster Hole.

Mendip news includes the result of the 2019 J-Rat digging award, won by Trevor Hughes and the Cainehillites for 638m of passage found and surveyed in Stock Hill Mine Cave. Second place went to Ali Moody for Bag Pit and third to Andy Sparrow and the Cheddar CC for some hard-won finds in Gough’s Cave. Elsewhere in Cheddar, the CDG have restarted their dig in the First Feeder Rising – and their digging techniques seem to be rather unusual to say the least! Other news includes a report of the UBSS Centenary Symposium held in November. From Ireland, Stephen Macnamara reports on a successful climb in Noon’s Hole, rediscovering some passages first entered in 1975 and probably not visited since.

The first of the main articles is part two of the interview with Pavel Demidov and describes the pushing of Verëvkina to a new world record depth of 2,212m and a total length of over 13km. The detail of Ženja Kuzmin free-diving a sump at -1.700m but being unable to explore the passages on the far side as the water was too high was most impressive! it seems there is still much to do in this cave.

Kevin Dixon reports on a project funded by the National Lottery Heritage Fund to transcribe and digitise The Cave Book, a unique record of exploration in Ingleborough Cave from 1837 to 1855 by the Farrar family of Clapham. Twenty copies, including a full transcription by Kevin, will be produced and many will be deposited in appropriate libraries. The now very fragile original has been deposited with the Yorkshire County Council archives in Northallerton.

In a thoughtful article, Frank Pearson considers caves “as untamed frontiers awaiting exploration”, and  wonders what that word ‘wilderness’ might mean.” He takes his title, “This Thing of Darkness” from Shakespeare’s The Tempest.

This issue concludes with a fascinating account of the history and exploration of Fort Stanton Cave in New Mexico by Peter Glanvill. This cave contains what Peter describes as the longest cave formation in the world, the Snowy River, a pure white flowstone carpet over 16km (yes, kilometres!) long. The Fort Stanton Cave Study Project have produced a book about the cave, 12 Miles from Daylight.

Every issue of Descent is impressive, and this is no exception to that rule. Descent is produced by cavers for cavers and is excellent value for money. Copies can be obtained from Wild Places Publishing. Take out a subscription now and if you already have one, check that yours is up to date.