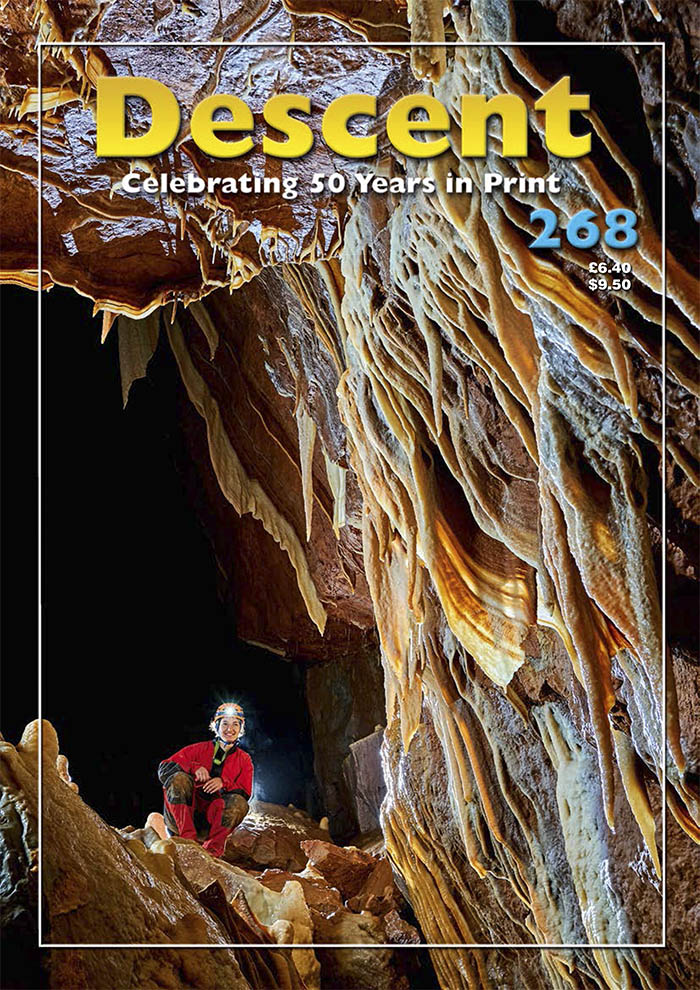 Descent 268 is now available! If a copy hasn’t arrived with you, it’s time to head over to Wildplaces Publishing to subscribe now or if you’re lucky enough to have a caving shop anywhere near you, call in and get a one from them. Descent is the best way to stay in touch with what’s happening in the caving world both home and abroad. So don’t miss out!

A packed Newsdesk gives a quick round up of the latest news from the Thai rescue and the rescuers, including a mention of Josh Bratchley’s rescue and the court case against Elon Musk. For speleophilatelists there’s the news of a new Lascaux cave stamp, and for lovers of the cartoon cat Garfield, there’s a sea cave in Brittany that awaits a visit from you!

Honeywell Analytics have made a generous donation of portable gas detectors to the British Cave Rescue Council which will equip all cave and mine rescue teams in the UK and Ireland. And talking of rescue, Res Con, the biennial gathering for anyone involved in or interested in rescue techniques will be held near Priddy on Mendip over the weekend of 6 – 8 September.

Andy and Antonia Freem have produced a new film aimed at helping teachers who would like their pupils to better understand caves. The film introduces the basic science and sport of caving and it’s proved surprisingly popular with adults as well. The film is now showing continuously at Dan yr Ogof caves. There are some changes afoot for the Hidden Earth Video Salon, and planning is already underway for this year. Check out Descent and www.hidden.earth for details.

News from around the regions kicks off in the Forest of Dean with news of survey work in Slaughter Stream Cave as Mark Tringham and others have started a resurvey to enhance and upgrade the original. There’s sad news of the death of Paul Hayward, one of the founder members of the Gloucester Speleological Society. In Wales, access has been regained to Cystanog Mine near Carmarthen over 100 years after the lead mine closed. The next Cavefest weekend is being held in South Wales over the August Bank Holiday weekend of 23 to 26 August with a range of trips on offer.

In the North, John Cordingley gives an update on the long-standing diving project at Malham Cove, and there’s more on diving in the Chapel-le-Dale caves. A new book on the Caves of Northumberland by Chris Scaife has been launched with events from Newcastle to the Dales. On Mendip, there’s been a significant extension to Stock Hill Mine Cave, as well as a breakthrough in Bag Pit Cave. In the Peak, there’s a report on the Orpheus Caving Club’s digs in Water Icicle Close Cavern and news of a new shaft on Eldon Hill.

Descent’s Mining correspondent. Chris Jones gives a round up of mining interest including the discovery of a new species of small white millipede on the spoil heaps of the old Cwn Colliery near Beddau in South Wales. Over in Ireland, the Speleological Union of Ireland have launched a new event in partnership with Vision Sport Ireland and the National Council for the Blind of Ireland called Delving in the Dark, which will take the form of a try caving event for ten visually impaired participants. There’s also news of the sad death of Michal Marek in a diving incident in Co. Donegal.

Howard Jones, NCA’s new insurance manager talks about the welcome announcement that the BCA are now able to offer expedition insurance for UK cavers. This is separate to the cover already offered to members and is non-obligatory.

In the Cave Science section, there’s a piece on some unusual bio-filaments found in caves. Roo Walters talks about the latest part of the plan to laser scan the world largest cave chambers, with Slovenia’s huge Skocjanske jame the next part of the project. A series of impressive photos illustrate their work.

There’s a packed Speleo Reader this edition, covering Underground, an account of urban explorer Will Hunt’s travels under the earth; Days out Underground, by Peter Naldrett with a range of tourist adventures; Slojame, a guide to the caves of south-west Slovenia; Chris Scaife’s Caves of Northumberland and The Earth Beneath My Feet by freelance artist Annie Farrer.

Chris Scaife appears again, talking about Cutthroat Caverns, a substantial maze cave discovered in the northern Pennines, accompanied by an impressive survey. In International news, there’s details of the successes of the 27th Caving in the Abode of the Clouds expedition to Meghalaya in India and a report of the latest expedition to the Gunung Mulu National Park.

John Cordingley reports on the success of the first Northern Explorers’ Forum held in the Yorkshire Dales and showcases some stunning photos.

As ever, this issue of Descent is superbly illustrated. The amazing front cover by Peter Gedel is of Yana Bilynets in the recently discovered Velika Rutarjeva jama in Slovenia and on the back cover there’s one of Tony ‘Badger’ Radmall in Racer Cave, Mulu. Descent is produced by cavers for cavers and is excellent value for money.  Copies can be obtained from Wild Places Publishing. If you’re not already subscribing head over to the website and sign up, and if you are already a reader, check that yours is up to date!