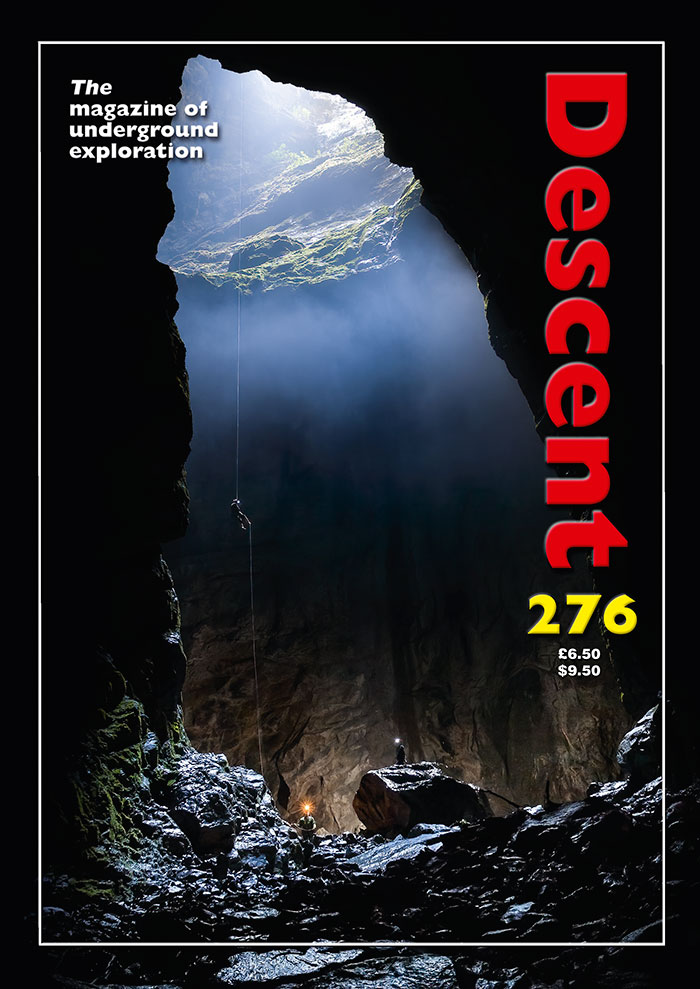 Descent 276 has landed – and it’s another issue replete with interesting, informative and exciting content. It’s good to see that even in these times cavers can find much to do – and to write about.

There’s much of interest in Newsdesk, from an update on the ongoing legal case involving BCA and the Welsh Government on CRoW to a note about a paper in the International Journal of Speleology by Hazel Barton on how show caves can be disinfected against coronavirus without damaging the cave itself. Elsewhere, there are stories about devastation and damage to cave entrances caused by logging on Vancouver Island being halted, at least in a 500 hectare preserve, by the need to protect a rare amphipod discovered by cavers.

Other conservation stories include the establishment of 15 new Global Geoparks by UNESCO, of which ten are based on caves or karst and the closure of eight caves in the Þeystareykir region of Iceland except for guided groups to protect them from vandalism. More vandalism is reported from Australia where the destruction by the mining concern Rio Tinto of two caves held sacred by Aboriginal peoples, as reported in the last issue, has now led to the chief executive and two senior staff standing down. In the US, the National Speleological Society has created and extended a number of its involvements in cave preservation across Tennesse, Florida, South Dakota and Alabama. Sadly, in Arkansas, there is a report of serious vandalism in Fitton Cave some time during August.

Cave archaeology stories include the discovery of possibly the oldest artwork in Britain, found during a dig in Jersey; a reassessment of Palaeolithic cave art by researchers in Toulouse who find that the horse was by far the most important animal represented, and a study which concludes that cave bears became extinct when they failed to adapt to the need for a changed diet as the environment altered.

The Peak News page details the capping of Calf Hole and Calf Shaft, climbing in Buxton Water Aven in Peak Cavern and digging by the Buttered Badgers in Rowter Hole, bringing a connection to Speedwell Cavern ever nearer. In the North, the Craven Pothole Club managed to organise a successful low-impact Gaping Gill without-a-winch meet, having had to cancel the usual August event. On Mendip, Chris Jewell has been diving in Wookey Hole, though the tight squeeze in boulders prevented him from reaching the 2005 limit. News from Wales and the Forest of Dean is mainly about access agreements and cautious reopening of caves and mines after lockdown. Irish news includes an obituary of Maurice Neill, inventor of the Neill chest box used in rope-walking, and an account of cave hunting in Kildare, one of Ireland’s cave-less counties, during lockdown. Some short extensions are reported from Scotland, but the most interesting point here appears to be the discovery that a sea cave at Bowduns is shown on the 1865 25″ Ordnance Survey map, something that was previously thought to be unique to Ingleborough Cave.

In International News, the death is recorded of Pavel Demidov, whose two-part interview was one of the highlights of Descents 271 and 272. Seemingly he was crushed by a collapse of clay and stones. His body was recovered a week later.

In Yorkshire, Turbary Pot has been connected to Turbary Inlet in Swinsto Cave, making yet another through trip possible in West Kingsdale. Speleo Reader has reviews of three quite different accounts of the underground: New Zealand Karst, a coffee table photo book, with some of the photos on glow worms reproduced in a four-page spread later in the issue; Somerset Underground volume 2, the second in Rob Taviner’s planned series of four covering everything of speleological interest in Somerset, and Subterranea, a more general interest book by Chris Finch, covering 40 sites around the world.

Elsewhere, Josh White describes the results of British caving trips to central Laos in 2019 and 2020. These trips explored 29 caves and surveyed 31.5km of passage in total, including the longest cave in the area, the 16.3km Tham Kon Nam system. Back in Britain, Alexander Ried describes bolting his way up Miners’ Chamber Aven in the Nameless Series of Peak Cavern.

Martin Mills has produced a two-page tribute to Fred Davies, one of Mendip’s finest cavers and someone who was a profound influence on all who caved with him. Chris Scaife reports on the Black Rose Caving Club expedition to Armenia, a long overlooked country in caving terms and one that still might have dragons! In the final article, Sid Perou, the doyen of underground filmmakers, sets out his thoughts on producing videos of caves and cavers. This article is a must-read for all aspiring cameramen and women.

Descent is always a great read and this issue is no exception. Chris and Judith must be thanked for keeping us all up to date with caving developments around the world.. Descent is produced by cavers for cavers and is excellent value for money. Copies can be obtained from Wild Places Publishing. Take out a subscription now and if you already have one, check that yours is up to date. In these strange times, when we can’t easily go caving, it is important to keep in contact with what is going on. Equally it is important to support those caving businesses that we all rely on.