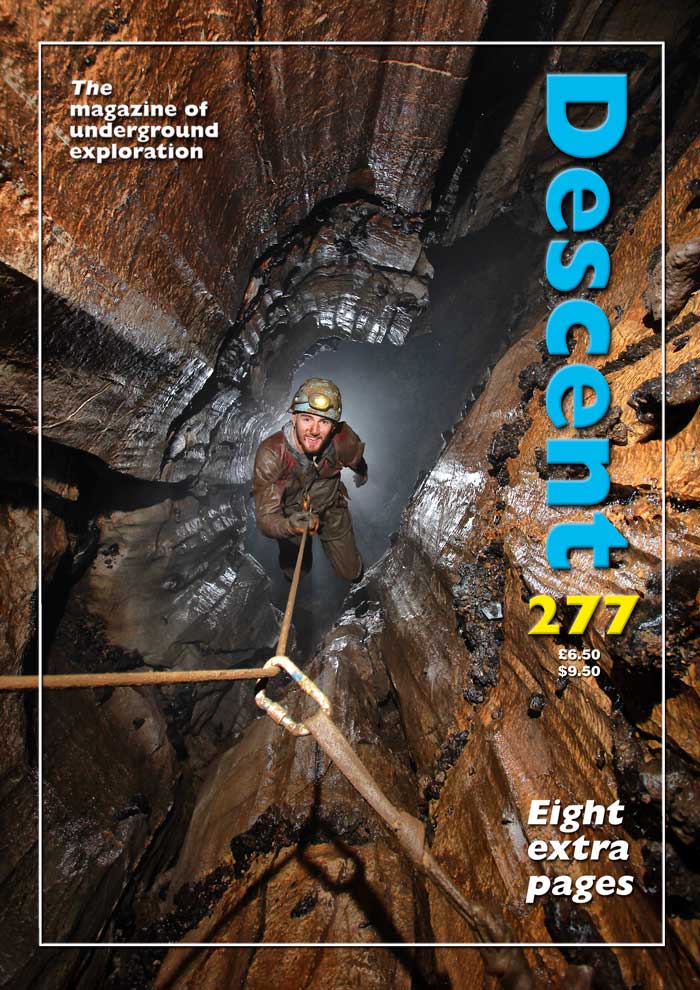 Descent 277 is now here. It’s yet another great issue from the Descent team with interesting and exciting content, including some great exploration stories. There is so much to tell that this issue has eight extra pages!

We start with Newsdesk where, of course Covid-19 gets a mention or two. Probably the most useful is the relaxation of some of the criteria for Ghar Parau Foundation awards for 2021. Replica caves are being constructed of the Yuangang Grottoes in northern China and of Tham Luang, in Thailand, site of the 2018 rescue. The cave itself has been partially reopened to visitors, there is a proposal to nominate the area as a heritage park and there is news of a musical tribute to Vern Unsworth, the local British caver who was so instrumental in organising the rescue.

Website updates get a mention, with changes to the BCA site and to Descent’s own Wild Places one. And for those who have taken refuge online from the pandemic, the video game Minecraft has announced a 2021 ‘Caves and Clffs’ update which includes dripstone caves and lush caves, whatever they are. Back in the real world, the longest cave in Croatia is now even longer and researchers in Israel have claimed to have documented the world’s longest cave in marl on the coast of the Dead Sea.

Sadder news is the reporting of the loss of several cavers recently. Pavel Demidov, whose death was announced in the previous issue, receives an appreciation from Robbie Shone, and other cavers being remembered include Matthew Parkes, Geoff Workman, Len Dawes and Mick Day.

From the Forest of Dean comes news of a return to digging at sites in the Wye Valley and of the the continuing survey project in Slaughter Stream Cave. Elsewhere, the Gloucestershire CRG gave a 25-year long service award to retiring secretary Paul Taylor during their online AGM. The CRG will be hosting a BCRC training weekend in July 2021, the planned December event being yet another victim of Covid-19. The Peak District has also seen a return to digging activities in Yoga Cave and at the nicely named Harry Potter’s bedroom in Bagshaw Cavern. It’s under the stairs, of course?

From Scotland comes the first of several reports of new finds in Britain. Ashery Pot is the latest cave to be pushed and explored in the Applecross region. It was explored and surveyed by Toby Speight and has given Toby his second J-Rat digging award, after the nearby Poll Breugair (Liar’s Sink) won in 2017. The 2020 award was announced after this issue went to press. Meanwhile, the rest of the Grampian SG held an enjoyable virtual annual dinner at which their founder member Alan Jeffries was awarded (or would have been if his internet hadn’t failed) the Golden Tiger Award for his outstanding contributions to the club and indeed to Scottish caving generally.

In Ireland, the SUI, having realised that no foreign expeditions could take place in 2020, turned their attention to areas closer to home and organised an intensive week of activity exploring the poorly documented area around Gorteenaguinnell townland in Co. Leitrim. The week, supported generously from the SUI’s Kozlowski Fund, was a great success. About 160 sites were checked in total and some 15 new caves discovered.

From Mendip we read tales of very wet caving trips after Storm Alex – Peter Glanvill gives a longer report on his experiences in Swildons Hole later in the issue –  the closure of the Cheddar caves owned by the Longleat Estate while a new access agreement is negotiated and some bolt climbing in Pearl Mine on Sandford Hill. The big story in this part of the world, though, is the extensions made to Wookey 20. Vince Simmonds gives a well-illustrated account of both the new finds, culminating in a huge and very well-decorated rift chamber, and a dry connection to Wookey 24, now reachable via a demanding and difficult route. Wookey Hole is now 4,380m long and 150m deep, the roof of the big rift chamber being the highest point in the cave.

Another new English find is Cussey Pot in Eyam, Derbyshire. This was first mentioned in Descent 275 but in this issue Rob Eavis gives a full account of the exploration, including a survey.  In Wales, Phil Knight describes the exploration of sea caves in Pembrokeshire by kayak, culminating in the 92m-long Ogof Sŵn Y Môr. Further afield, Roo Walters gives a personal account of his visit to Than Luang, Thailand, to take part in filming operations and to compile a 3D survey of the cave. The resulting film has been broadcast by National Geographic. In the USA, Lechuguilla Cave, New Mexico, has now passed the 150-mile mark. Max Wisshak gives a brief update on the history of this remarkable cave.

The issue is rounded out by a cryptic crossword, some very interesting book reviews and an exchange of letters about British expeditions to Armenia.

Descent is always a great read and this issue with its extra pages is a bargain as well. It’s great to read about so many new finds in such a difficult year for all of us. Descent is produced by cavers for cavers and is excellent value for money. Copies can be obtained from Wild Places Publishing. Take out a subscription now and if you already have one, check that yours is up to date. In these strange times, when we can’t easily go caving, it is important to keep in contact with what is going on. Equally it is important to support those caving businesses that we all rely on.