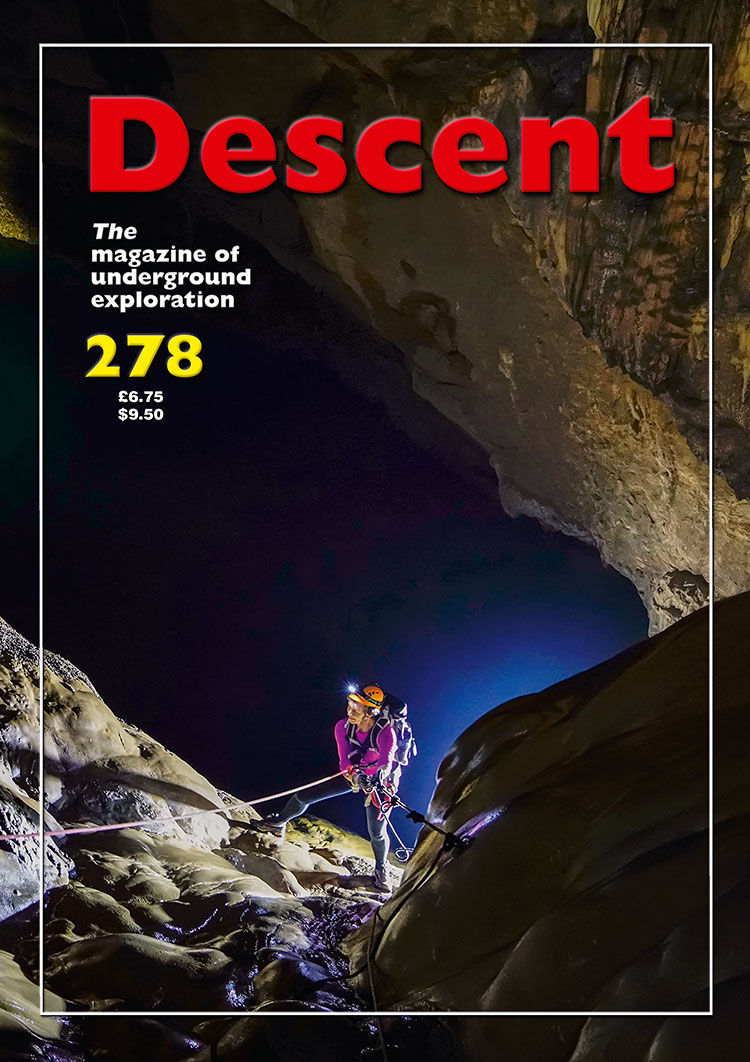 Another excellent issue from the Descent team is packed with interesting and exciting content including a trip in the “world’s largest cave”!

As is so often the case now, Newsdesk starts with items about the current pandemic, including a catch-up on its effects on caving in the UK alongside some news about the international research efforts to track down coronaviruses in bats and other small mammals. Bats get other mentions, as well, with reports on a study of how hibernation site choices affect the spread of White Nose Syndrome in North America and cutting edge filming of British bats for the BBC. Other subjects getting several mentions include cave art with the oldest dated example found in Sulawesi, plus finds in the Canary Isles and a new threat to the Spanish site of Altamira.

The 2020 JRat Digging Award presentation was a little different, for once not at the Hunters’ but instead being videoed on a wet and windy Mendip hillside. The award went to the Grampian SG for the third time. Also on video are a series of upcoming seminars being organised by the BCRA and linked to the International Year of Caves and Karst, an initiative of the International Union of Speleology. And still on the subject of filming, Dick Willis organised a fund raiser to help Sid Perou acquire modern film editing kit.

And yet again, in this issue come notices of those we have lost, including long-time Mendip stalwart Dave Turner, Gerry Cottle, owner of the Wookey Hole showcave complex, and John Richards, possibly best known for his illustrations for David Heap’s ‘Potholing. Beneath the Northern Pennines’. There is also a longer appreciation of the life of Len Dawes from Jerry Wright.

From the North comes news of new passage in Pikedaw Calamine Caverns, and from Derbyshire the short but previously unrecorded Aragog Cave in Blackwell Dale. Also in the North, Phil Murphy and Graham Proudlove are compiling a database of all the dye-tests carried out in the Yorkshire Dales area. They would love to hear from anyone with previously unpublished data. In Wales, Martyn Farr reports on being able to photograph in Cathedral Cave without the showcave lights on and in Clearwell Cave when bedecked with its amazing Christmas decorations.

In the Forest of Dean, the main item is a report of further problems with sewage affecting Slaughter Stream Cave. Fortunately this was not a problem at Noxon Park Iron Mines when Greg Jones went swimming there. John Kelly reports from Ireland on the results of dye-testing suggesting open passage between Pigeon Pot and Shannon Cave. Also from Ireland is a report of digging activity at Pollnagort in Co. Leitrim.

Despite the constraints on caving imposed by the pandemic, this issue contains several reports of new finds: in Cussey Pot, Eyam, Derbyshire; Broken Finger Pot, East Kingsdale, North Yorkshire and a round-up of recent finds in Ogof Ffynnon Ddu in South Wales. These include aven ascents which have cemented the cave’s position as the deepest in Britain by taking its depth back up to 312.5m. OFD had long been recorded as 308m until the 2014 resurvey corrected it to 293.5m.

A six page article, including a centre spread two page photograph of Ken Cave, by Martyn Farr, describes his tour to the caves of the Phong Nha-Ke Bang National Park in Vietnam. This was an organised tour, but gave Martyn the opportunity to photograph in Hang Son Doong, said to be the largest cave in the world and also to photograph a former Miss Vietnam (H’Hen Nie).

Back in Britain, Steve Warren describes the exploration of the springs beneath Kilnsey Crag, North Yorkshire. Steve’s description starts with work chiselling away at cobbles in 1953 and continues up to the present with attempts to pump the canal in Kilnsey Cave in 2019. These springs drain a vast limestone massif and at times of flood carry a lot of water. There is great potential here for future discoveries.

Frank Pearson describes digging activities at Pilgrim Pot and Long Kin West in North Yorkshire. His article ponders the effects of Covid restrictions on caving and also muses on the poetical aspects of cave exploration. In similar vein, John Gillett has penned a short piece entitled ‘Nostalgia’. Both articles stress the importance of the friendships forged underground.

Lastly, there is the solution to the cryptic crossword featured in the previous issue and an interesting spread of book reviews.

Descent is always a excellent read. It’s great to find out about so many new finds in such a difficult year for all of us. Descent is produced by cavers for cavers and is excellent value for money. Copies can be obtained from Wild Places Publishing. Take out a subscription now and if you already have one, check that yours is up to date. In these strange times, when we can’t easily go caving, it is important to keep in contact with what is going on. Equally it is important to support those caving businesses that we all rely on.