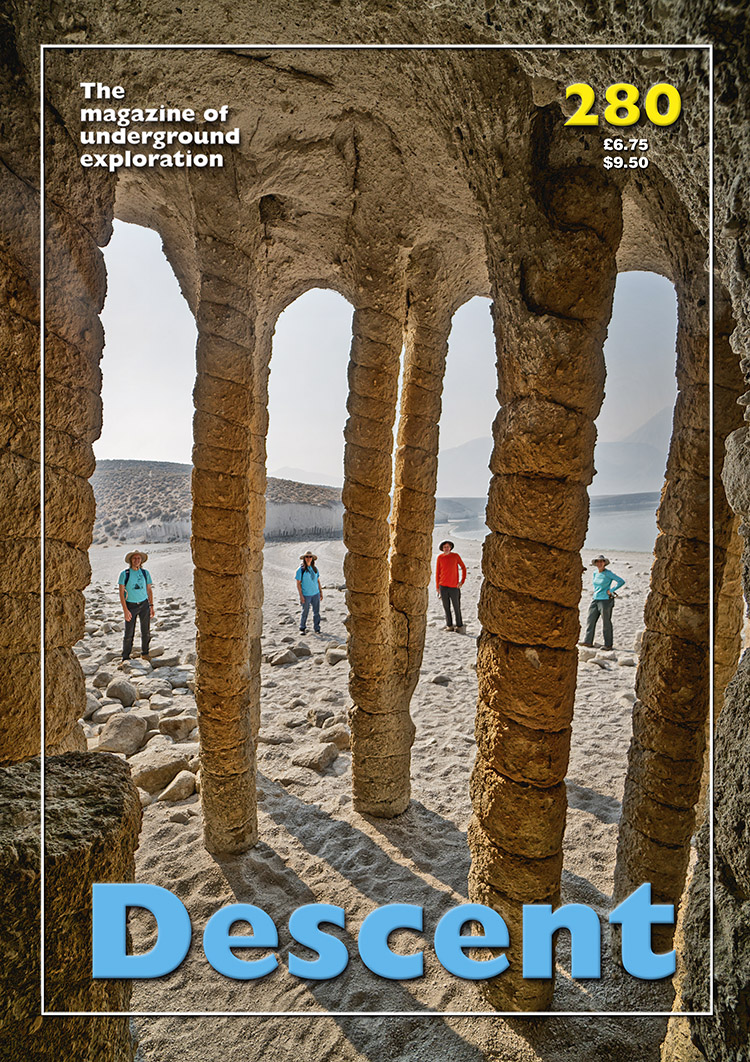 If you want to know why a couple of Aussie cavers have had two new species of cave spider named after them get your mitts on the new issue of Descent, which brings you caving news from around the world.

Descent 280 should now have reached you by now, but if not, it’s time to head over to Wildplaces Publishing to subscribe or if you’re lucky enough to have a caving shop anywhere near you, call in now that shops are open again, and get a one from them.

Richard Harris and Craig Challen, the two Australian cave divers closely involved in the Tham Luang rescue, have had the more unusual honour of having two new species of cave spider named after them. Four new species in all have been identified from caves under the Nullabor Plain. The other two were named in honour of the two Thai divers who died, Saman Kunan and Beirut Pakbara.

Newsdesk also reports that Andy Eavis has been awarded the Founder’s medal by the Royal Geographical Society. And it also includes the usual updates on events and activities affected by Covid-19, including the NSS Convention (virtual), the 18th International Congress of Speleology (postponed to 2022) and Cavefest 2021 (cancelled – though this is late news, with the cancellation happening after the issue went to print).

From France, there is a report of two climbers putting up a new route on virgin stal in the Grotte de la Salamandre – hardly a conservation-minded activity – and a mention of the team of 15 who spent 40 days isolated with no means of measuring time in the Grotte de Lombrives. There are reports of other studies, but on bats not people, including on White Nose Syndrome, echolocation and a brightly coloured new species from the Nimba Mountains of Guinea.

Regional news kicks off from the Peak District with reports of finds and connections in Cussey Pot and a plan to lower archaeologists into Eldon Hole. On Mendip the rescue team has become a registered charity and there has been another rockfall in G.B. – fortunately not leading to a rescue! Elsewhere in the south, there has been a revival of digging in the Quantock Hills. From the North come reports of the funerals of Albert Chapman and Peter Lister and of a fundraising campaign to help Malcolm Bass who suffered a major stroke in August 2020 but is now back home.

Over in Ireland, several small new finds have been made by the Clare Caving Club after checking archive geological field maps. From Wales there’s an update on the roadworks affecting the Clydach Gorge. Meanwhile in the Forest of Dean, there is something of a mystery as to why the Slaughter Resurgence has dried up.

Further afield, there’s been another cave rescue in Thailand; a monk, Phria Ajarn Manas, became trapped while on his annual pilgrimage when a thunderstorm caused a flood. Fortunately he was located beyond the sump and could be dived out. More sadly, Diego Sainz died in the Grotte de Rutelins in Switzerland following a fall.

The first feature article is on Bagpit, an interesting new cave in the depression of the same name on Mendip. Ali Moody describes the digging and exploration of this complex cave, Danielle Schreve talks about the mammalian bones found there – thought to be around 200,000 years old – and Paul Töchterle focuses on the cryogenic cave carbonates discovered in the cave and believed to be up to 36,000 years old. Clearly Bagpit has a long and complicated history.

Richard Bendall describes the digging and discovery of Not-Meridian Pot on Leck Fell, noted when a new collapse was found in a shakehole. It obviously wasn’t Meridian Pot, so they just had to dig it! Back on Mendip, Brian Woodward gives his own tributes to Dave Turner, Jim Hanwell and Fred Davies, very much, as he says major ‘influencers’ on Mendip. On the subject of ‘influence’ Joe Duxbury has an opinion on some research from the University of Tel Aviv that concluded Palaeolithic artists worked under the influence of raised carbon dioxide and depleted oxygen levels. Needless to say, Joe was unimpressed by the article!

The final feature in this issue is a report by Dave Bunnell on the Catacombs of Lake Crowley, a man-made lake in California. These lake-edge caves look really spectacular with their multiple columns of volcanic tuff.

Speleo-Reader rounds off the issue with reviews and previews of a dozen books, including Aquanaut by Rick Stanton and Thirteen Lives by John Volanthan. Copies of both both can be obtained from Wildplaces Publishing.

Descent is always a excellent read and it’s great to see just what is going on underground. Descent is produced by cavers for cavers and is excellent value for money. Copies can be obtained from Wild Places Publishing. Take out a subscription now and if you already have one, check that yours is up to date. As we slowly open up again and more caving can take place, it is important to keep in contact with what is going on. Equally it is important to support those caving businesses that we all rely on.