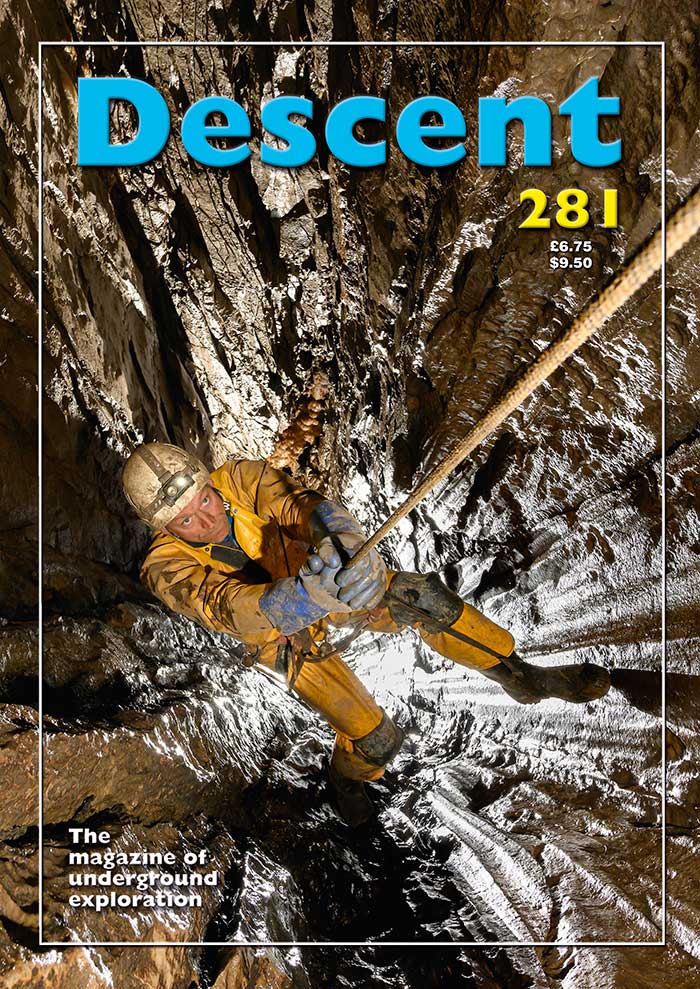 Bored with the rain and fancy some armchair caving instead of a wet walk to get underground? Then settle down for a good read, with news, views, digs and more!

Descent 281 should now have reached you by now, but if not, it’s time to head over to Wildplaces Publishing to subscribe or if you’re lucky enough to have a caving shop anywhere near you, call in now that shops are open again, and get a one from them.

Newsdesk kicks off with reminders that the plague isn’t over yet, reporting that Hidden Earth 2021 and CaveFest won’t be going ahead and that the BCRA’s Science Symposium and its International Year of caves and Karst seminars can both be attended by Zoom. And given that the UIS International Congress has been postponed to 2022, the next one will maintain the traditional four year calendar and take place in Brazil in 2025. The 2022 event will be in France. Elsewhere, the thought did cross our minds that maybe the NSS managing to pay off the mortgage on their new HQ is at all related to the note about the FBI getting a warrant to dig in a Pennsylvania cave in a search for gold stolen during the Civil War!

In matters archaeological, there’s a new virtual reality tour of Lascaux, currently running in Paris, an engraving of a stag found in a burial chamber in Scotland as well as research into the perception of movement in Ice Age art and even its destruction from erosion by bats! Mention is made of an excavated ‘cave church’ in Derbyshire that may have been home to a Saxon king. Rather more up to date is a game invented by a team from Bristol’s two universities in which the player navigates around a Himalayan cave system and another game developed by students from Harvard University called ‘Cave Diver.’

From Up North there are reports of extensions to Austwick Beck Head, a new survey of the Wolf Cleugh caves and new bolts in Pasture Gill Pot. In the peak District, there’s a new through-trip from Silver Eyes Mine to Ball Eye Mines and a report of exploration in Cussey Pot. A variety of reports from Mendip cover digging, re-bolting, parking and access. From Ireland there is a report of a comprehensive clean-up of Pollnagossan and from the Forest of Dean there’s pollution monitoring, digging and the possibility of dating the Slaughter Stream Cave dog.

The longer articles start with a full report by Frank Pearson on the exploration of Mayday Hole, above White Scar in Yorkshire. Elsewhere in the Dales, Richard Bendall talks about an ongoing project at Wee Pot on Leck Fell and Dave Ramsay describes the forging of a new link in Pippikin Pot,  known as ‘The Pleasant Way’. He wonders whether this may have been a pointless exercise, others may agree. There is a two page spread of photos from the collection of the late Peter Binns, donated to the British Caving Library by his son. Another article of historic interest comes from Ken Dawe describing caving in ‘goon suits’ amongst other things.

On the conservation front, Mike Manseur describes how he and his team successfully repaired formations in Carlsbad Cavern. Dave Baines, who has written a book on the subject, describes the dangers of flooding – and how to avoid them. Essential reading with the weather over this summer!

Speleo Reader has three pages of interesting book reviews, including ones of Rick Stanton and John Volanthen’s very different books describing the Tham Luang Cave rescue in 2018. How to choose between them? Don’t! Buy both, they are equally excellent in very different ways. Copies can be obtained from Wildplaces Publishing.

This issue of Descent is, as always, an excellent read and it’s great to see just what is going on underground. Descent is produced by cavers for cavers and is excellent value for money. Copies can be obtained from Wild Places Publishing. Take out a subscription now and if you already have one, check that yours is up to date. As British caving returns more and more to normal, it is important to keep in contact with what is going on. Equally it is important to support those caving businesses that we all rely on.