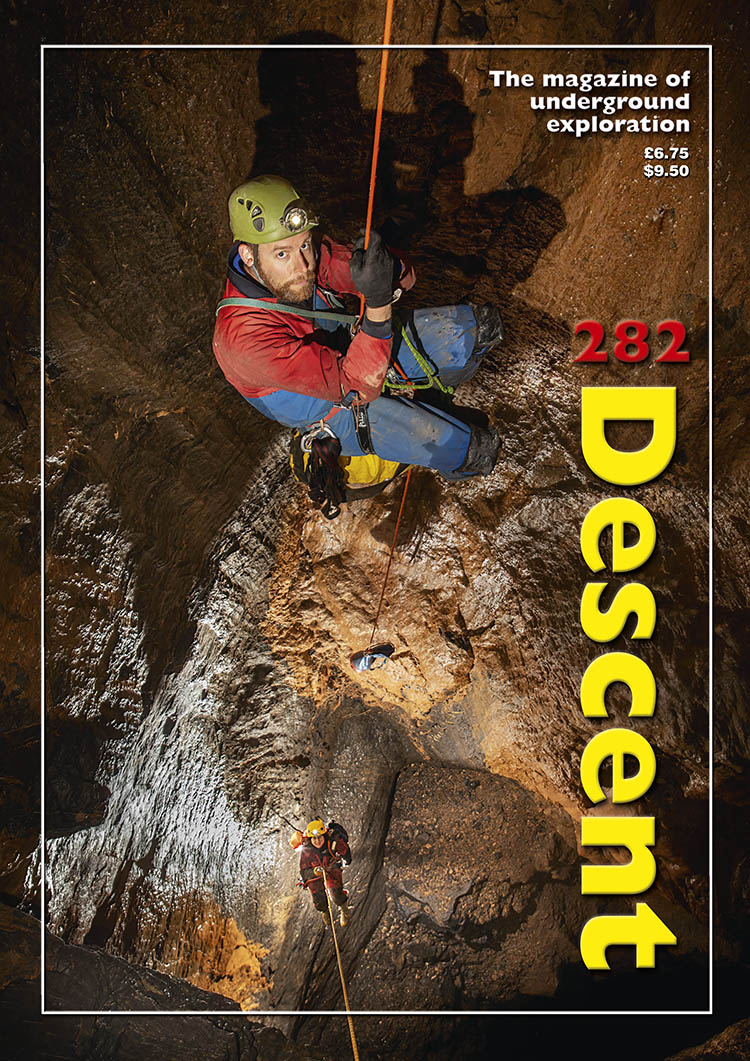 Descent 282 should have reached you by now, but if not, it’s time to head over to Wildplaces Publishing to subscribe or if you’re lucky enough to have a caving shop anywhere near you, call in now that shops are open again, and get a one from them.

Newsdesk contains a variety of short items, starting with a review of a fictional Chinese caving disaster movie, Cloudy Mountain, and a documentary of the very real Tham Luang incident called The Rescue. There are two mentions of Mammoth Cave, the one in Kentucky, one on an archaeological dig on the site of the cave hotel and the other reporting the survey of an additional eight miles of passage, from March to September this year. Two important American caves in Missouri, described as the most important rock art site in North America have been sold. Meanwhile the analysis of pigment from Cueva de Ardoles in Spain has confirmed that it was painted 64,000 years ago by our Neanderthal cousins.

There is an alarming report of a serious threat to the unique cave ecosystem in Israel but in better news two new regions with underground sites, in Romania and in northwest Wales have been added to UNESCO’s list of World heritage sites. Closer to home, a long-abandoned underground train station in London can now be visited by the public and even closer to home there is another brief update on the BCA’s ongoing legal case against the Welsh government concerning CRoW. There is also an announcement of a forthcoming increase in BCA’s membership fee.

From the north of England come reports of the Craven Pothole Club’s Gaping Gill meet run, thanks to Covid imponderables, without a winch, and the Bradford Pothole Club’s meet organised and run but not at Gaping Gill!. From Easegill comes the story of the discovery of Lamb Trap, a pothole found in the course of rescuing, yes, a trapped lamb. And from Ireby there is a report of the return to a dig in Pinocchio Pot, but there is still a lot of sand down there. Further north in Gretadale, North York Moors CC and York CC have opened up Draughting Hole, a maze cave first noted, but not pushed, by the Moldywarps SG in the 1960s.

In the Peak District, the bone deposits in the excavated shaft at the bottom of Eldon Hole have been inspected by three experts lowered (and retrieved!) by DCRO as a training exercise. A further report on the bones is expected. Elsewhere, the Eldon PC are still searching for the elusive link between Cussey Pot and the mine workings below, more natural passage has been found but not, as yet, the connection. The Forest of Dean reports mainly concern rescue matters, including the Covid-delayed BCRC Medical Weekend. And in Wales, there are notes on abandoned railway tunnels and the 75th birthday party held by SWCC in August.

From Portland comes the exploration of the short but interesting Nookey Hole through-trip. And from Mendip there is a report of an August Bank Holiday weekend of intense work at Thrupe Lane Swallet to clear accumulated debris from the stream channels at the swallets and of the ensuing through-trip by many of the participants. It seems that much necessary work was done and a good time had by all.

Mendip is also the site of the first main article. Following on from some unauthorised and poorly executed bolting work on the Right-hand route in Rhino Rift, the entire route has now been properly equipped with BCA approved resin anchors. The report is followed by some interesting thoughts from Andrew Atkinson, who organised the work, on bolting and conservation. Elsewhere, Paul Taylor ruminates on having completed 250 trips in Otter Hole.

A five-page spread by Primož Jakopin describes an 18-strong expedition to Uzbekistan. The caves of Boybuloq and Višnevskij are now only 70m apart and linking them will produce a 2,000m deep system, but this is proving to be no easy task.

Covid-19 has produced a number of changes in the way that people go about things; Chris Scaife reflects on how walking and cycling largely replaced driving during lockdown and describes his personal challenge to carry out classic trips in the Yorkshire Dales using only bikes for transport. The final articles include a historical account of the first trip to sump one in Swildon’s Hole and the discovery of Barnes’ Loop and an analysis by Martin Mills of the number of caving books being published. He concludes that they are indeed being published, or at least reviewed, more frequently than once they were.

This issue is unusual in having a two-page editorial written by Chris. This describes in detail the problems that now beset niche businesses such as Wildplaces Publishing in both producing journals – paper prices will have increased three times in 2021 – and especially in distributing them abroad. These problems are, hardly surprisingly, the result of both the pandemic and Brexit.

This issue of Descent is, as always, an excellent read, it’s great to see just what is going on underground. Descent is produced by cavers for cavers and is great value for money. Copies can be obtained from Wild Places Publishing. Take out a subscription now and if you already have one, check that yours is up to date. As the editorial in the issue relates, production and distribution of specialist journals is now harder than ever. Descent deserves our support and needs it to continue in these straightened times.