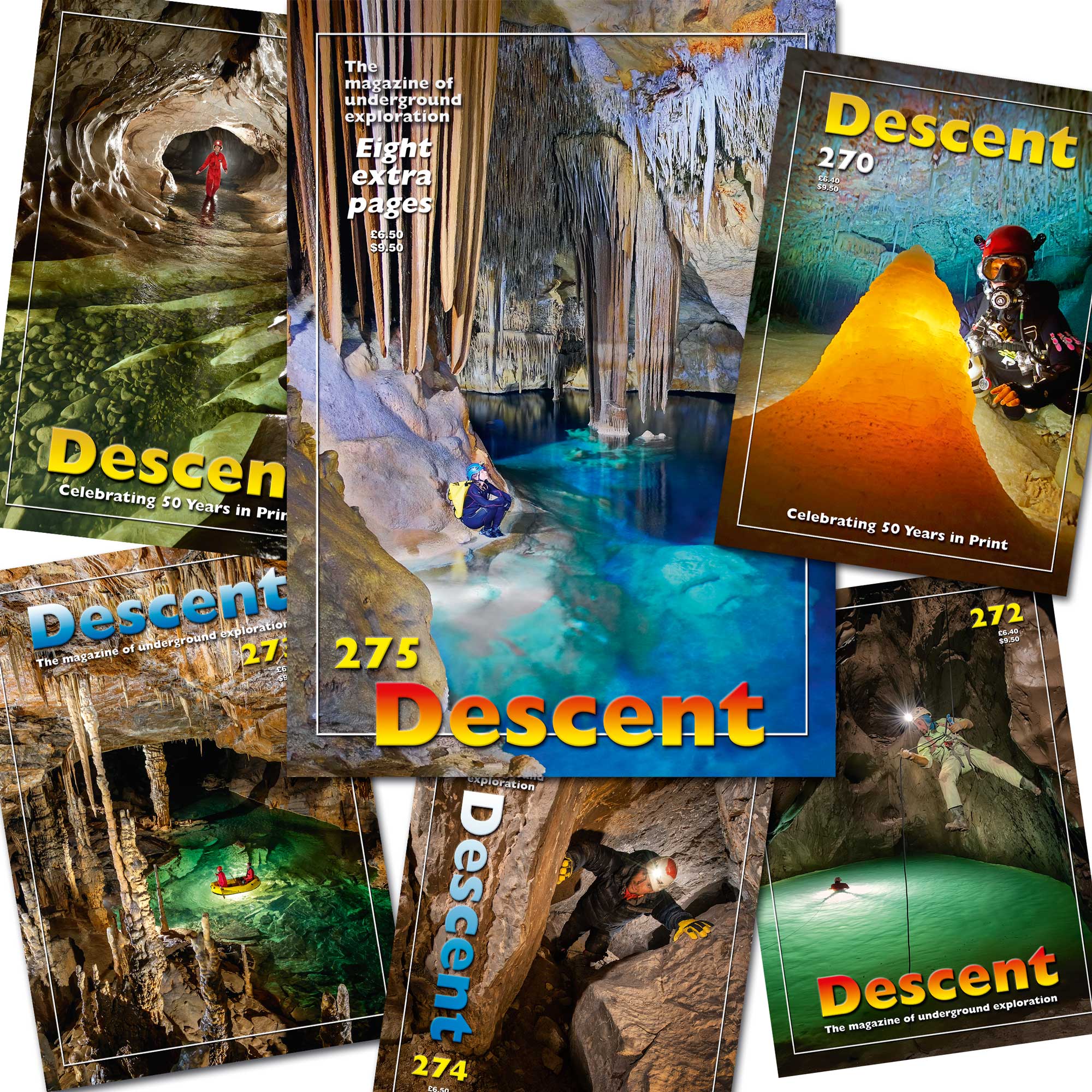 Christmas is coming and as a present from the lovely folks at Wildplaces Publishing, there’s an extra eight pages this issue! Do take a moment to check your subscription is up to date and as if not, head over to Wildplaces Publishing and they’ll be delighted to help you out. And maybe think about taking out a Descent subscription for a friend as a present! That way you won’t have to wrap anything, either.

In this issue, there’s news of the most significant discovery on the Isle of Portland for years, with the connection of two more caves, although the wriggle and struggle might not suit everyone! There have been discoveries in Crag Cave in Ireland, as well, with not one but three extensions, proving that no matter how well travelled, there’s always more to find.

There’s some great news about Llethryd Swallet on Gower, where access to this important site has been regained, revealing not only much mud, but beauty too. And talking of access, in the Viewpoint slot, caver and diver Pete Glanvill wonders what the cost of caving on open-access land might be if that ever comes to pass.

One of the biggest stories in the UK is the tale of the Grand Traverse, as it’s become known. Decades after it was first proposed, and years after the caves were connected, for the first time the Three Counties System has been physically traversed in a through-trip. Here, the story told from the point of view of the divers, organisers, helpers and photographers who all came together to make this amazing effort so successful.

Talking of amazing efforts, by now many cavers will have seen The Rescue, a feature-length film about the famous cave rescue in Thailand premiered in October. Find out how it stands up to scrutiny. In addition, the Cave Diving Group is now 75 years old, and it’s members celebrated in style.

There are also some questions to consider in two features. Firstly, the owner of a fine old photograph of Alum Pot would like to know more of its history: who took it, when and why? Secondly, we all know that cavers change; they experience different lives. Five of them, it seems. The question is: which one have you evolved into?

There’s some light-hearted fun to be had with the Underground Crossword, which will provide a nice way to while away some time over the festive season with a caving crossword puzzle. If you’re feeling in a more competitive mood, you might end up as the new owner of some fine Petzl kit if you can answer three questions correctly!

Remember that Descent magazine is run by cavers for cavers and that your subscription means a lot in these difficult times. Every issue is packed with caving news and features, accompanied by stunning photos. Don’t miss out, so to check whether your subscription is up to date or to take one out now, head over to Wild Places Publishing, who’ll be delighted to welcome you on board!