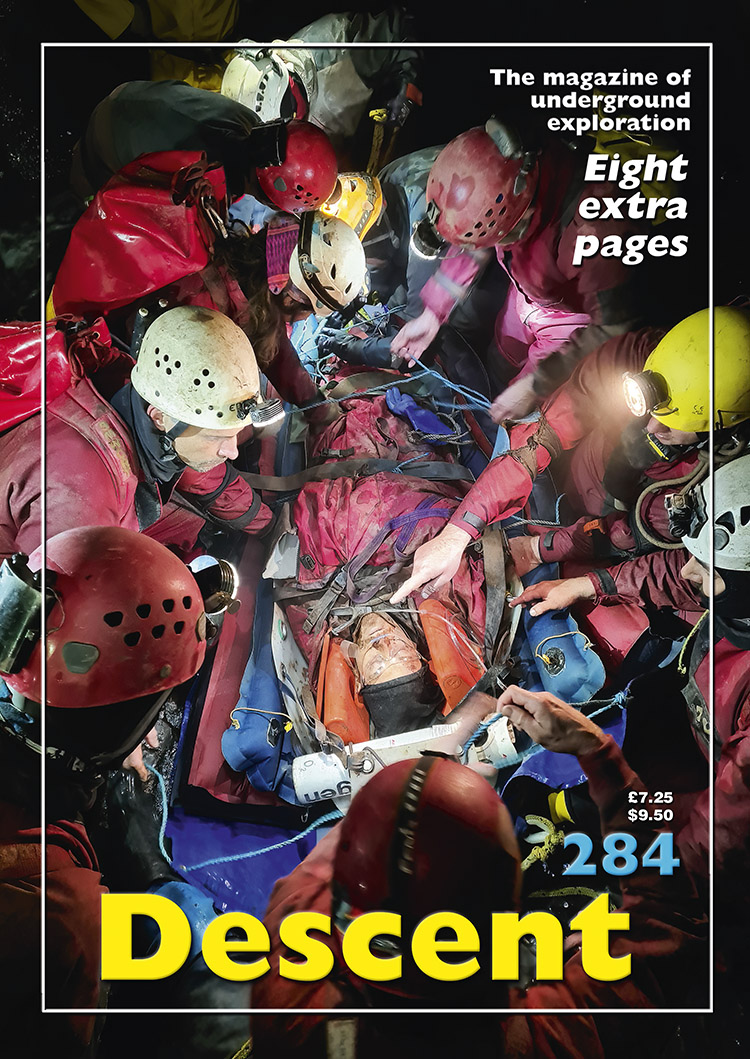 Subscribers of the magazine Descent will by now have received the latest issue, number 284, and for those that do not, this is one you really do not want to ignore. Visit  Wildplaces Publishing to subscribe or call in to a caving shop to pick up a copy.

One of Descent’s enduring characteristics is the regular inclusion of special features, and narratives you won’t find elsewhere. Websites and social media thrive mainly on the short read, but there is always a place for a long read, and this issue has a classic. Drawing on the accounts of a number of people directly involved, “The Smithy rescue” is a 14 page account of the remarkable rescue of George Linnane following a very serious accident in Ogof Ffynnon Ddu resulting in multiple injuries. Unlike accounts you may have watched on TV or read about in the UK press, the Descent account has been written by cavers for cavers. Reading the powerful narratives, you are drawn into the story, connecting with those involved, and especially if, like me, the cave is one with which you are familiar, and there are quite a few names you recognise in the cast of characters.

In this compilation, you can hear the first-hand accounts of the people who were caving with George on the fateful day, the story of Paul Taylor who had the unenviable task of Press Officer for the rescue, tales from members of the responding cave rescue teams, two accounts on the medical challenges presented, and a candid account from George himself of the whole casualty experience, from start to finish. If you thought you had heard all you needed to hear about this incredible rescue, I am confident you will discover more by reading this gripping account in the latest Descent.

Elsewhere in this issue, we have the usual compilation of news from UK regions and further afield. We hear of malicious gate damage at Ogof Draenen and Waterwheel Swallet, an account of the October 2021 SUICRO Symposium in Tralee, cave investigation work near Dent and at Deepdale, and news that 32 years of diving investigations at Malham Cove have now concluded with no lead left to follow. In Wales a couple of digs at Llangattock are described, and we read of the long-awaited reopening of caves in the Clydach Gorge following the completion of the road improvements there. New arrangements for visiting Ogof Ffynnon Ddu are now in place, and these are described; visiting the cave at times other than weekends is now easier.

The Mendip page is given over entirely to a summary of active digs in the area, in a report of the annual Jrat’s Digging Award. The 2021 winners were the Cainehillites, a team excavating an extension to Stock Hill Mine Cave, adding a worthy 173 metres to its length in the past year.

In the Forest of Dean there was a joint cave rescue exercise between Gloucestershire CRG, Mendip Cave Rescue and South East CRO, which was a very productive day’s work. Other news covers water-tracing, monitoring of sewage discharge, a generous donation to Gloucestershire CRG, and a curious collapse on farmland near Cowshill Cave.

Mining News reports some concerning potential developments over mine access in Wales, a good news dog rescue story from the Lake District, and plans to convert a limestone mine in Portland into a visitor attraction telling the story of life on Earth.

International News features one exciting story – the potential for linking two major cave systems through exploration work being undertaken at Ahnenschacht, where there are many unchecked leads to explore. This site lies between two cave systems, both with lengths in excess of 100 km.

In Marginal Gains, Andy Torbet describes attempts to find new ground in the Daren Cilau system along with George Linnane and Chris Jewell, in 2020. This took place over a few days, and by diving into the cave via Pwll-y-Cwm.

David Rose, BCA’s CRoW Working Group Convenor, provides an update on developments in the campaign to achieve the right to go caving on open access land. It is 75 years since the first descent of Lancaster Hole, and Bill Nix and friends commemorated this by undertaking a trip through the cave, returning to the surface via County Pot, with the nostalgic use of ladders and carbide, for some.

Inspired by previous reminiscences in Descent, Brian Tilbury writes at length about his life of caving, from early trips in Somerset wearing a tin helmet and a bicycle lamp, to visiting some classic European caves and extensive caving in South Wales.

Finally, there are two international stories to complete this issue. One describes the confrontations in Queensland, Australia, between cavers and conservationists on the one hand and limestone quarrying interests on the other. Ultimately some caves were destroyed but those that survived are now managed by the Queensland Parks and Wildlife Service, and quarrying ceased some years ago. The second international report covers a tragic accident in Panama in November 2021, when members of a tourist party in the Lago Bayano caves were caught by a flash flood which caused a number of injuries, and also sadly the death of two tourists and the guide.

Descent seems to improve with every issue, and the editorial team are simply setting the bar higher each time. Long may it continue!  Copies can be obtained from Wild Places Publishing. Take out a subscription now and if you already have one, check that yours is up to date.