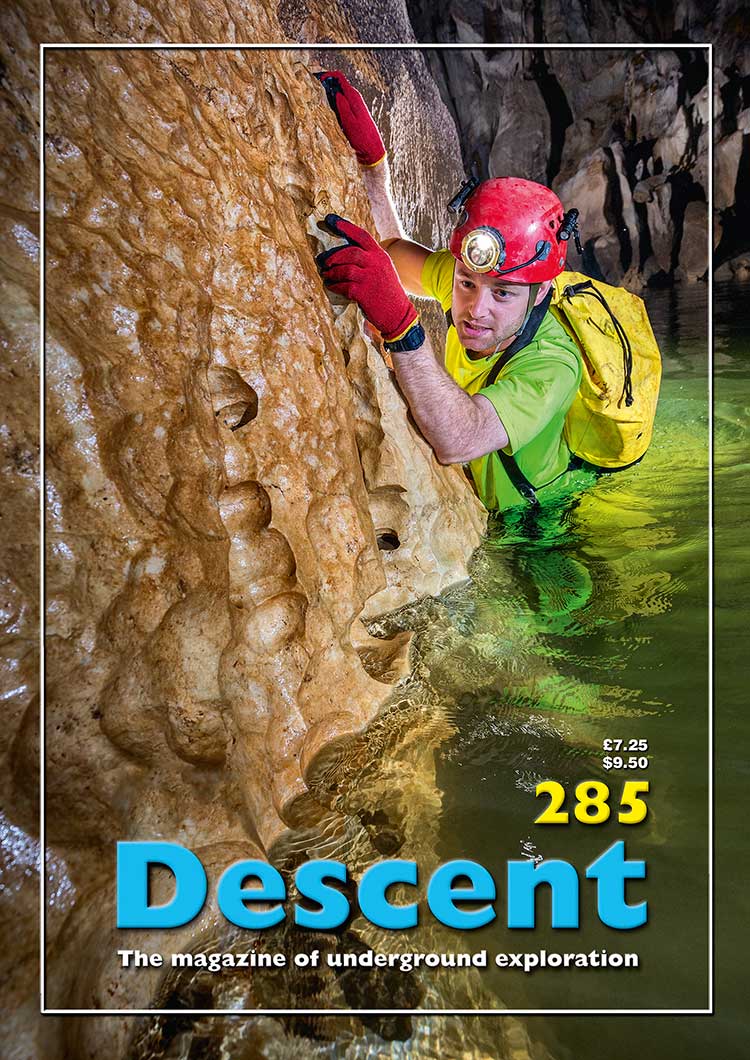 The caving world may be slowly starting to return to what passes for normal, according to the latest issue of Descent. After so long of having to report news about caving activities being adversely affected by Covid-19, issue 285 is full of news about regular caving activities.

In the news section, there is an update on work in the Stoney Middleton area at Cussey Pot, news on access to Eldon Quarry, and digging at Bull Pit. Some sad news appears in the North section, where we learn of the death at 93 of Peter Bayes, who set up and ran the caver-friendly Pen-y-ghent Stores and Cafe, at one time selling caving equipment, and with the business continuing until 2018. Jim Newton’s 90th birthday celebrations are noted, while the affect of three winter storms in quick succession prevented much caving activity during February.

The main news from Wales is the introduction of a £5 per head levy for access to Dan yr Ogof, the money being required for conservation, maintenance of fixed aids, and rescue provisions. The fee goes directly to the Dan yr Ogof Conservation Access Panel, and not the show cave. A project to digitise and transcribe the numerous logbooks of South Wales Caving Club is reported, which will be no mean feat. News from Ireland covers activities on the Cavan Burren, while the Mendip section reports problems with various cave closures: some temporary, others more long-term. Issues with ash dieback clearance in Longwood Valley means that cave access is now subject to certain conditions, as the permissive path through the valley is now closed to allow the work to proceed. The age limit for access to caves managed by Charterhouse Caving Company has been lowered to 12, with conditions. A digging prospect in Swildon’s Hole is described, as well as two rescues, one in Read’s Cavern and the other in Swildon’s.

Pete Glanvill describes an admirable project to use a portable jet-washer to clean up several caves in Devon. Digging and surveying work in the Forest of Dean has been keeping cavers busy there, and Paul Taylor emphasises the importance of saving personal caving diaries, and recording caving memories for posterity.

There are a number of short features in this issue, very nicely illustrated with photos and surveys. First we read about some discoveries and good leads made in Matienzo in 2021, an area that has seen more than 60 years of regular exploration and major discoveries. Chris Scaife’s article covers a number of visits during the year and is full of promise for the future.

In “A race against time”, Mike Butcher describes the exciting discovery of the Stoney Middleton Master Cave in Derbyshire, and a major survey of the catchment shows how the caves and mines of the area all fit into the larger picture. A short article by Alexander Ried discusses how to set up a power cordless drill with a separate belt-fastened battery, which makes the drill unit much lighter and more manageable when placing hangers. The unsung heroes in the British Cave Rescue Council backroom have again produced their annual summary of cave rescue incidents across the UK. 2021 saw fewer incidents than in previous years, but that is not surprising given the reduced levels of activity across the country.

Paul Dummer describes visits to Myanmar in 2019 and 2020, where 5.3 km of cave passage was explored and surveyed, with the potential to find more in the future. Unfortunately, the current political situation doesn’t bode well for a further visit any time soon. The much-publicised discovery of Sherford Cave near Plymouth is covered by Pete Glanvill and Vince Simmonds. They describe the rich archaeological material that comprises remains of mega fauna and other contemporary mammalian species. These have been removed for future display in a local museum. There’s some fascinating detail of how the cave would have been affected by much colder climatic conditions when permafrost was widespread, and the cave was affected by sub-zero conditions.

In Speleo Reader there are reviews on Sid Perou’s book Hanging on a Thread, Jack Avila’s thriller Cave Diver, the third edition of the York and North York Moors caving clubs’ journal, and Peter Ryder’s and John Longstaff’s Swaledale Above and Beneath. Finally, in a more light-hearted piece, Pete Towndrow recalls his first caving trips on Mendip, and the thrill of exploring his first cave with minimal equipment and a great sense of adventure.

Descent continues to provide the widest range of caving news and stories; there is simply nothing else like it out there. Copies can be obtained from Wild Places Publishing. Take out a subscription now and if you already have one, check that yours is up to date.