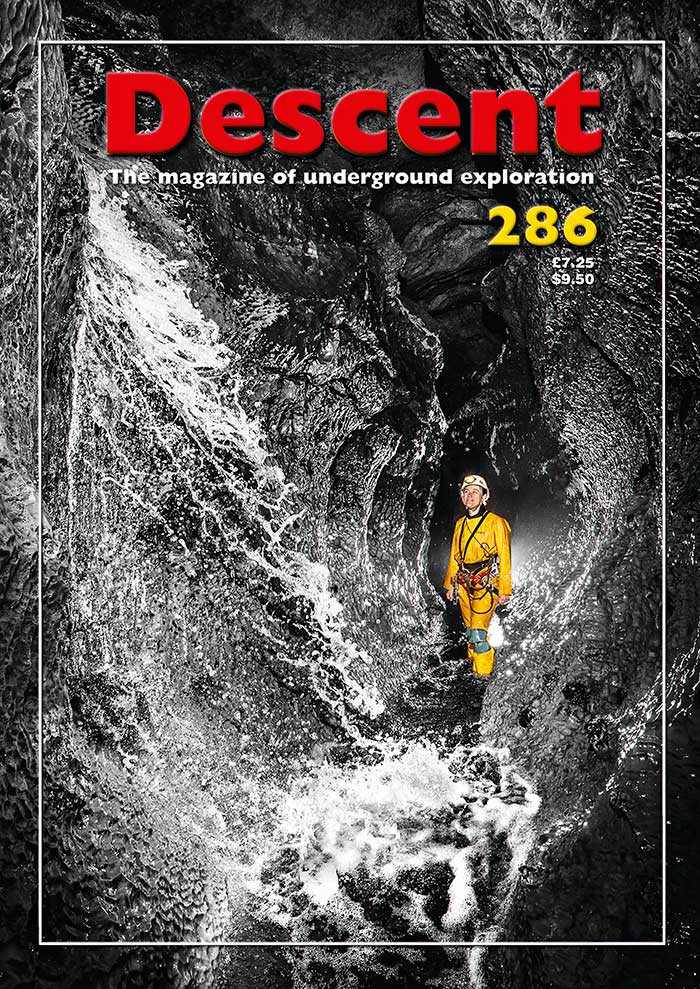 Secret hideouts, cave-related films, bats and the latest on CRoW are among the stories in the latest informative and enjoyable issue of Descent magazine.

Issue 286 provides the usual mix of caving news and opinion from the British Isles and further afield. The news section contains a variety of short bulletins on a wide range of matters from bats in a Dorset stone quarry, to notices for field meetings, new books being published, and a new fund for sports clubs in England that cavers could apply for to finance projects enhancing participation in the sport of caving.

Some highlights from regional news sections include an exciting update on exploration work at Stoney Middleton Dale by Eldon PC, authorised digging in Crummackdale which sadly did not culminate in the discovery of any caves, and from Wales we learn of restored access to the caves and silica mines of the Sychryd Gorge. Gloucestershire Cave Rescue Group have made a generous donation of surplus medical items to the people of Ukraine. By calling around, they added further donations from Devon CRO, South and Mid Wales CRT and South East CRO.

From a much older conflict, we have a news story from Ireland where excavations in Tormore Cave in Sligo have uncovered items from the time of the Civil War in the 1920s, undisturbed since the cave was secretly used as a hideout by 34 men for six weeks. The main story from Mendip is a tribute to Jim Young who died recently. Without Jim’s efforts none of the exceptionally impressive steelwork and engineering at Templeton Pot would ever have materialised. The opening of a museum telling the story of coal-mining in Kent is covered in mining news; the last mine in the Kent coalfield closed in 1989. In international news we learn of discoveries and developments in Mexico, where a small team of British cavers joined others in the PESH 2022 expedition.

With the BCA’s legal actions to pursue the right of access to caves on Access Land now effectively over, two contributions from individuals closely involved are a timely read. Tim Allen provides his opinion on how the campaign developed, and what he believes are the reasons behind that lack of a favourable outcome of the recent judicial review case in Wales, and David Rose provides details of how things developed in that case and where we stand today (at the time of submission to Descent). There have been further developments which means BCA will not be pursuing rights under CRoW for cavers through the legal route. On a positive note, Tim points out that one result of the campaign is that cavers are now very much more aware of cave access issues, and this is perhaps reflected in improvements for cave access in the North where the BCA campaign has resulted in easier access to a number of caves and fells.

Tanguy Racine write about the productive exploration of Sistem Migovec in Slovenia in recent years. With new opportunities opening up, the prospects for future discoveries in this cave system are very good – it now stands in excess of 44km and more than 900m in depth. In the Write it Down! regular feature, ‘Deej’ Lowe recounts fond memories of Peter Bayes, late owner of the Penyghent Cafe and the friendship they had and the times they met and worked together. Ess-houses in the Peak District – artificial caves dug into large heaps of limekiln waste – are described by Simon Brooks. They were built as dwelling places by the poor people who scraped a living working the kilns in the 18th and 19th centuries.

Chris Scaife describes some finds in Matienzo, Spain, at Easter 2022. His short report with a survey describes an exciting discovery of some superb cave passage in a cave known in English as Mistletoe Pot. The discovery of an important bone cave in Devon was made public recently, and Peter Glanvill puts this discovery into the wider context of other cave discoveries and, sadly, losses since the 19th century. Cave-related films are the subject of two stories, the first on MacGillivray Freeman’s IMAX film Ancient Caves, and the second review is for Call-Out, Sid Perou’s four-part video on the history of British cave rescue, which are free to view at  Sid Perou CAVE RESCUE CHANNEL.

Finally, are you looking for a new caving lamp? Descent is offering the chance to win the newly released Petzl DUO RL headlight. All you have to do is come up with a winning line for the Descent caption competition, supplying a witty caption for a Billy Bunter illustration from The Magnet magazine in 1939, used in a story titled Secret of the Sea Cave.

Descent continues to excel at keeping cavers up to date with all that is happening in the caving world, both in the British Isles and abroad. Copies can be obtained from Wild Places Publishing. Take out a subscription now and if you already have one, check that yours is up to date.