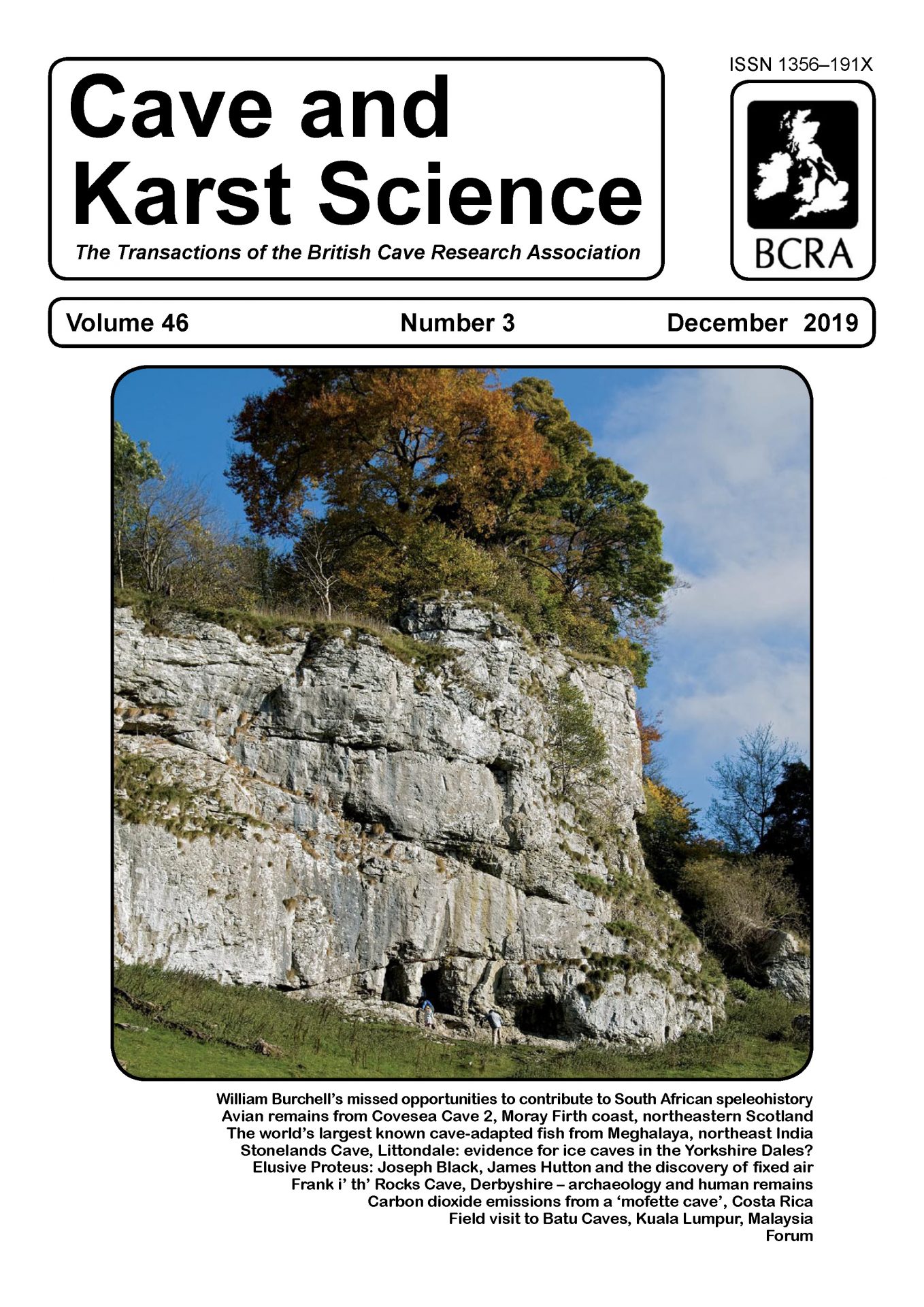 Reports on large cave fish from Meghalaya, archaeological sites in Scotland and Derbyshire, ice caves in Yorkshire and carbon dioxide – historically and geologically – are amongst the features in the new edition of Cave and Karst Science.

There are ten main articles in volume 46 no. 3 as well as some shorter pieces in the Forum section. The first is an account of the archaeology  of Frank i’ th’ Rocks Cave, Derbyshire by Catrin Fear and Hannah O’Regan.

The 1925 excavation of Frank I’ th’ Rocks Cave, Derbyshire, and the subsequent publication left many questions unanswered. With a focus on gaining an understanding of how the site linked to Quaternary glaciations, the excavators provided a detailed report on the artefacts and fauna but failed to give details of the human remains or to relate the finds to one another. This has left a gap in the understanding of the site, compounded by the later loss of many of the artefacts that were excavated. The current study re-analysed the surviving assemblage, comparing the results with the details in the excavation report and in later catalogues. Re-analysis suggests multi-period usage from the Upper Palaeolithic to the Georgian period. However, most of the evidence, including the human remains, relates to the mid–late Romano-British period.

Steve Craven looks at the contribution to South African speleohistory from William Burchell’s brief description of the limestone and dolomite in the Cape Colony.

Over in Yorkshire Phillip J Murphy, David Hodgson, David A Richards and Dan C Nita have been looking at evidence from sediments comprising fractured speleothem blocks in Stonelands Cave which suggests the possible one-time existence of an ice body within the cave entrance chamber. Results of uranium–thorium dating of one of the speleothem samples constrain such activity to after ~136 ka.

On the Moray Firth coast, northeastern Scotland, Alex Fitzpatrick  has been identifying avian remains from Covesea Cave 2. The Covesea Caves are a series of archaeological cave sites that are hypothesized to be part of a larger mortuary complex used during the Late Prehistoric period. Although much attention has been given to the unusual assemblage of human remains recovered from these sites, there has been less analysis undertaken on the vast amount of archaeofauna from the caves. This is in the process of being rectified through the recent work of the Covesea Cave Project, under the direction of Ian Armit and Lindsey Büster, currently being undertaken at the University of Bradford.

This report details attempts to confirm species identifications for several faunal bones of interest through various methodologies; unfortunately, not all of the attempts were successful. However, identifications are confirmed for two avian bones using comparative osteological analysis at the Avian Anatomical Collection at the Natural History Museum at Tring, United Kingdom. These species are placed in context through consideration of previous excavations at the Covesea Caves, as well as recent literature on ornithological analyses of ritual and funerary sites in Later Prehistoric Britain.

Don McFarlane, Guy Van Rentergem, Joyce Lundberg, Carlos Umaña Ramirez and Keith Christenson have studied carbon dioxide emissions from a cave in Costa Rica developed in volcanic rocks. Natural caves that emit geogenic CO2 appear to be very rare; they report CO2 measurements from Cueva de la Muerte, Costa Rica, a natural cave developed in recent volcanic rocks. The CO2 is strongly stratified, emerging from the cave in a density flow that hugs the ground. The total CO2 export from the Cueva de la Muerte is significant, estimated at approximately 272 ± 5.6 metric tonnes of CO2 per year. They have proposed a new term to distinguish such caves from caves with non-geogenic CO2 – “mofette cave”.

Dan Harries, Thomas Arbenz, Neelesh Dahanukar, Rajeev Raghavan, Mark Tringham, Duwaki Rangad and Graham Proudlove report on an unusually large new species of cave fish. In February 2019 a troglomorphic fish was discovered in a cave in Meghalaya in northeastern India. The largest individual seen in the cave was in excess of 400mm in standard length making it, by far, the largest known subterranean fish found to date. Initial investigations indicate it is a close anatomical match to Tor putitora but differs in its depigmentation, lack of eyes and in its subterranean habitat.

Frank Pearson has written an account of the discovery of carbon dioxide and its place in the understanding of limestone corrosion from the seventeenth to the nineteenth centuries. Natural philosophers working in chemistry during the seventeenth and early eighteenth centuries, perceived a gas drawn from burnt wood or decaying or fermenting vegetation, and described it as “fixed air”. Medical experiments designed to dissolve kidney and bladder stones within the human body prompted development of techniques to weigh and measure materials with precision, enabling the identification of fixed air, later to be re-named carbon dioxide. Through wide-ranging social interactions and the communication of experimental reports, the chemists’ laboratory discoveries were transferred and applied in fieldwork by geologists. The work of the chemist Joseph Black and the geologist James Hutton laid the foundations for the geological theory of uniformitarianism and an understanding of the corrosion of limestone and the formation of caves and karst phenomena.

From Malaysia, Vanessa Banks, Elanni Affandi, Tham Fatt Ng, Ros Muhammad and Teckwyn Lim report on a field visit that they made to Batu Caves, Kuala Lumpur, in April 2018. The Batu Caves, immediately to the north of Kuala Lumpur, are an important Malaysian tourist attraction. Questions related to speleogenesis of the Batu Caves appear largely to have been ignored in the literature. Some initial observations from a field visit during April 2018 suggest that a range of karst processes are manifested over a distance of less than 2km. This report provides a brief introduction to some of the features.

Cave and Karst Science is published three times a year and is free to paid-up members of the British Cave Research Association. Members can also read it online here. Non-members may obtain copies for an annual subscription of £40 (plus postage for non-UK destinations), or, for online access only for £30. A discounted student subscription is available. The publication contains a wealth of information and represents excellent value for money for anyone with an interest in the science of caves. It is well-presented throughout, with a clear, attractive layout and numerous high-quality illustrations.