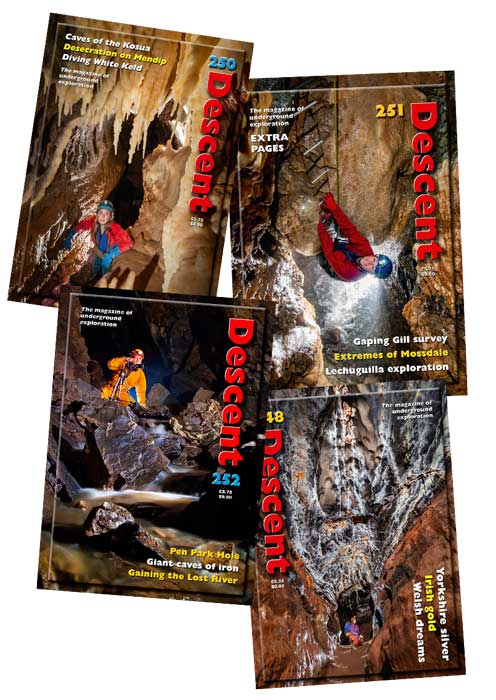 Descent 263 will be out soon so now’s a good time to check if you’re up to date with your subscription! The hard-working folks at Wildplaces will be delighted to welcome you back into the fold if yours has lapsed. Descent will provides news, photos and features both at home and abroad, all stunningly illustrated.

For the past few weeks, the eyes of the world have been focussed on events in Thailand, as rescuers battled against what seemed like impossible odds to rescue 12 children and their football coach trapped deep inside a flooded cave. British cavers and divers were heavily involved in a complex and protracted rescue operation. As the seriousness of the situation unfolded, Descent constructed a timeline of events.

British cavers have long been exploring the caves of Tresviso in Spain, pushing downwards and, sometimes, upwards. This latest progress report and round-up of recent years’ work, sees the team heading into the ominously named Death Race. Further east, Martyn Farr has spent some time on Kefalonia, an island with a remarkably strange hydrology, and reports on its cave diving potential.

NAMHO has held another successful national conference, this time in the Forest of Dean. There’s a report from Peter Jackson. Further north, Bradford Pothole Club have celebrated another successful winch meet at Gaping Gill, while Mendip looks back at the immense flood 50 years that changed caving’s landscape for ever, sweeping away the old 40 Foot Pot in Swildon’s Hole. Wet weather is something of a contrast to the current dry spell!

You can find out if you won a pair of goggles in the Protecting Diggers competition and amuse yourself with an account of when a rest in a cave gave someone a shock!

We’ll be bringing you a full report as soon as Descent lands on our mat, but in the meantime, pop over to the Wildplaces Publishing subscriptions page to ensure your subscription is up to date!