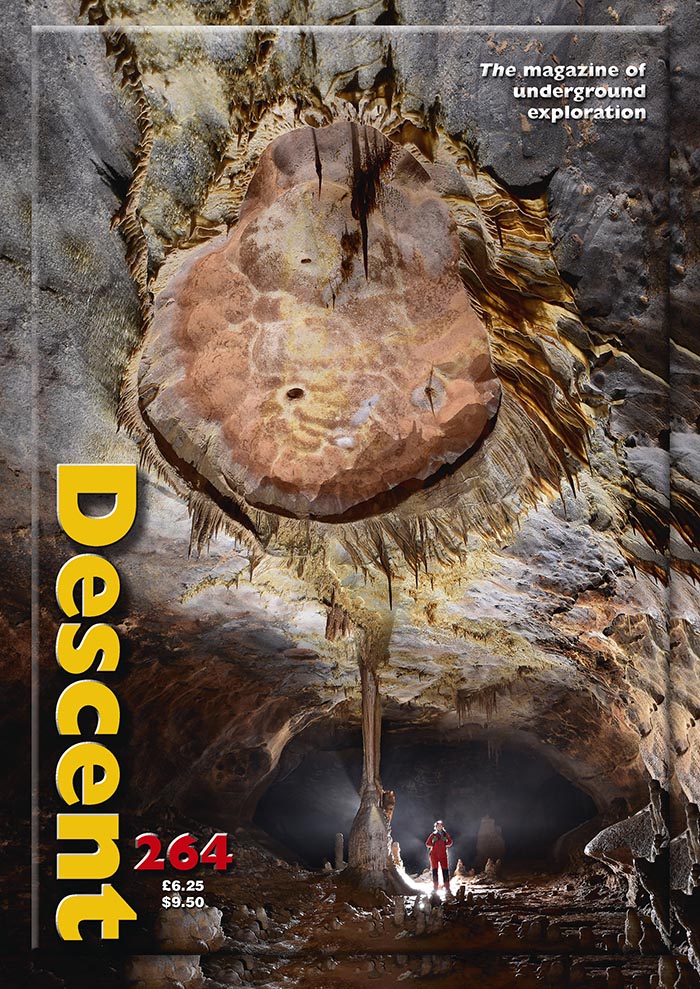 Descent 264 is now available! If a copy hasn’t arrived with you, it’s time to head over to Wildplaces Publishing to subscribe now or if you’re lucky enough to have a caving shop anywhere near you, call in and get a one from them. As we’ve said before, we think Descent is great, and we want to shout about it to the caving world. And if you or your club have a journal or newsletter you’d like us to cover so it can reach as wide an audience as possible, just get in contact and we’ll do our best to help.

Newsdesk has the usual fascinating snippets of news at home and abroad. If you’d like to own a cave, now’s your chance as over in South Wales, a parcel of woodland containing Bridge Cave and Cwm Pwll-y-Rhyd is for sale – but you’ll need deep pockets! In Scotland, a concealed door has been found into a smugglers’ cave. In Nottingham, the council are working on a technical guide for owners of the many sandstone caves riddling the town.

Rescues are in the news, with a major one in Italy to extract a caver with back injuries from the Grotta della Mottera in Piedmont. There was another – less serious – one in Wyoming, when a group celebrating a birthday climbed down a rope and were unable to exit. And spare a thought for the unfortunate group of tourists in Padirac in France who were locked in the cave overnight when they failed to hear an announcement that the cave was closing. Bears get their moment in the limelight with a new study on when they became extinct in the UK, and new information has also been extracted from the DNA of a 35,000-year-old specimen.

New information has been derived from some rare species of blind cave shrimp living in caves near the Sea of Galilee in Israel, and anyone interested in cave life can now download the talks from the California Cave Life Symposium held in April of this year. A flake of stone from Blombos Cave in South Africa has yielded a piece of stone with red ochre markings believed to be 73,000 years old, which would make them the oldest known human drawing.

The new Underground Worlds calendar is now available, just in time for any cavers with an eye to some early Christmas shopping. For surveyors, there’s the welcome news that Leica are sponsoring two Disto X3 laser rangefinders for the BCRA cave surveying competition to be held at Hidden Earth from 2019 to 2021. Film-maker Keith Edwards won Best of Show in the video section at the NSS Convention in Montana, and Andy Eavis has won the Merdeka award for his contribution to the Malaysian people with the numerous expeditions he’s organised to Mulu.

News from around the regions looks first at the north, where Tim Allen and others have been taking advantage of the recent dry weather to investigate some abandoned digs in Marble Steps Pot. Dry weather has also aided exploration in Gaping Gill. John Cordingley is looking for more information on the downstream sump in Marble Steps Cave to ascertain whether it’s lower than Keld Head, and whether its ultimate destination could be lower than Leck Beck Cave. Contact him via Descent if you can shed any light on this conundrum. Some new topos are available on the CNCC website and their August newsletter highlights some work the group are doing to benefit public understanding of caves.

In Wales, there’s been an unfortunate spate of gate vandalism, with damage being done at both Tunnel Cave and Ogof Draenen. In better news, a successful Cavefest UK took place in South Wales, with numerous caving trips as well as plenty of socialising. There’s news from the Peak District that Whalf Mine Climbing Shaft is unsafe and there has been a collapse in that area of the mine complex near Monyash. Bolting work has taken place at some sites in the Manifold Valley, with more work to come.

On Mendip, Andy and Antonia Freem have completed work on a new film about St Cuthbert’s Swallet, which has now been premiered. The hot dry weather has led to an increase in carbon dioxide levels in some caves including Manor Farm. Estelle Sandford is still seeking information on digging finds in both Mendip and Scotland as part of the celebrations for this year’s JRat Digging Award which will take place on 24 November in the Hunter’s Lodge.

Across the Irish Sea, work has been taking place in Co. Fermanagh in both Pollasumera Cave and Cat’s Hole. Further south, in Co. Clare, cavers are getting ready for this year’s SUICRO symposium which will be taking place in Lisdoonvarna on the Burren on the weekend of October 26 to 29 2018. Also in Clare there’s been a collapse in the connection between St Catherine’s One and Doolin Cave. If you have any information on caves in the counties of Clare, Galway, Roscommon and Mayo, contact the UBSS as they are in the process of completing work on a new guidebook to these areas.

In the Forest of Dean, conservation work has been carried out in Otter Hole; and a grant has been obtained to fund a dye-tracing project in two other areas. A bad smell in a cave on Wigpool turned out to be a dead badger, but hypodermic needles have also been found, so do take care. In the south east, Pete Glanvill reports on the discovery of Wellington Hole, a cave on Portland, which is apparently spacious by the standards of the area! Scotland has netted a prize for the finding of cryogenic calcite in Rana Hole thanks to the efforts of Grampian SS member Julian Walford. Work has been done on remnant raised beach caves on the island of Lismore in Argyll and a small limestone exposure to the south of Durness has yielded in the region of 130m of new passage.

Speleo Reader has details of various new caving books, both fact and fiction, ranging from a book on Caves and Ritual in Medieval Europe, AD 500 – 1500 by Knut Andreas Bergsvik and Marion Dowd, to a Lara Croft-style romp in The Anomaly by Michael Rutger. In International News there’s a report on the latest work on the lava caves of southern Vietnam.

The main features start with a five-page spread, beautifully illustrated with both photos and surveys on Long Kin West and the lost river of Ingleborough by Frank Pearson talking about the 50-year effort digging and pushing in the cave. There is further information on the news story that gripped the world in June, that of the Wild Boars football team and their coach trapped in a flooded cave in Thailand. Kevin Dixon talks about his work scanning a huge volcanic sea cave on a small island on the west side of Shetland, whilst coping with all the problems that working on the sea brings. Andrew Munoz brings the entertaining story of an expedition to a remote region of eastern Zimbabwe where having to cope with baboons wasn’t at all out of the ordinary!

The summer saw two large gatherings of caves, the EuroSpeleo Forum which took place in Austria and the NSS Convention in Montana. In the Write it Down section, Clive Keen talks about caving in the Canadian Rockies.

Winning the latest Descent competition will bring the unforgettable opportunity to take part in Go Below’s Mine to Mountain endurance challenge. Check out the details. All you have to do is correctly answer three questions…

The front cover is an amazing shot of The Sunflower in Grotte de Saint-Marcel in France taken by Philippe Crochet, which was the winning image from EuroSpeleo, while the Descent showcase on the back cover features two superb photographs of Rhosydd Slate Quarry in North Wales taken by Phil Wolstenhome.

Every issue of Descent amply demonstrates the dedication of the editorial team to bringing together all the latest caving news and stories from around the world. Descent is produced by cavers for cavers and is excellent value for money. Copies can be obtained from Wildplaces Publishing here. Take out a subscription now and if you already have one, check that yours is up to date!