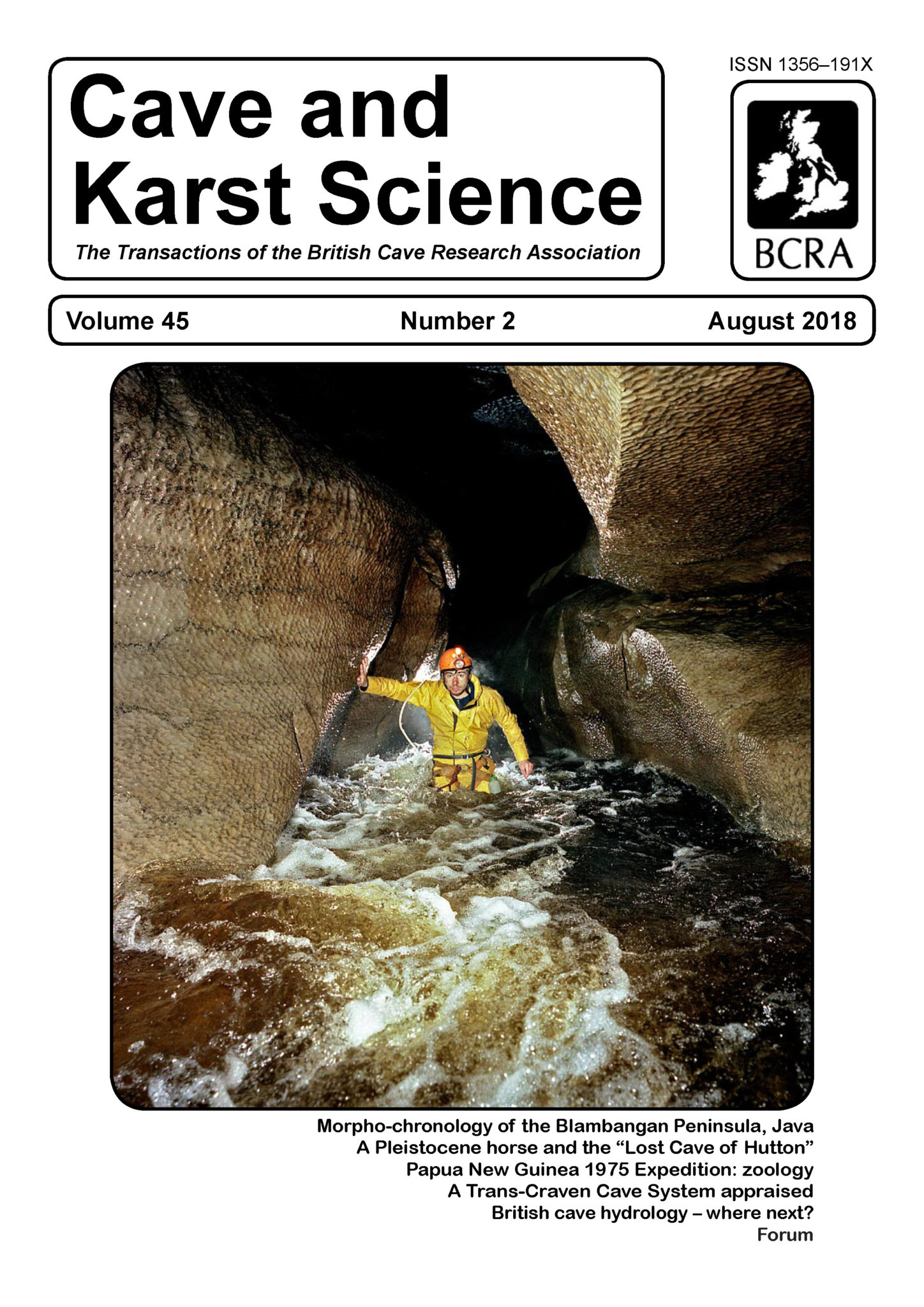 The August 2018 issue of Caves and Karst Science is now available.

Volume 45, Number 2 carries five main articles; the first being a subjective summary of the history, activities, publications and some of the characters of the former CRG and BCRA Hydrology Groups (1964–1999) written by John Wilcock. John hopes that current BCRA members might be encouraged to form a Special Interest Group to undertake targeted cave-related-hydrological activities within the BCRA.

Don McFarlane, Joyce Lundberg and Alan Gray describe the dating of a Pleistocene horse excavated from Upper Canada Cave, West Mendip in relation to the data on horses in Britain after the Last Intergalacial. The confused history of the lost bone caves of Hutton Hill is reviewed on the basis of these Pleistocene remains, the morphology of the cave, and evidence of 18th century mining. The timing and nature of the Hutton Hill cave faunal deposits are also re-interpreted.

Tony Waltham and Harry Long re-appraise the possibility of a Trans-Craven cave system. There have long been notions, proposals, concepts and dreams relating to a single integrated cave system extending beneath the Yorkshire Dales to form an underground route from Barbondale in the west to Wharfedale in the east. Since exploration of the links that established the Three Counties Cave System, a significant segment of a Trans-Craven Cave System is now a reality, and it is appropriate to re-assess the scope for further extensions towards the east. Prospects for finding linking cave passages to Ingleborough are good, and are just about conceivable as far as Fountains Fell. However, links become progressively more tenuous farther east, even though significant lengths of cave passage undoubtedly await discovery within the Wharfedale catchment.

Interim zoological results from the British Speleological Expedition to Papua New Guinea, 1975, are presented by Petar Beron. The expedition discovered a surprisingly rich specialized cave fauna in mountains at c.2,000 metres above mean sea-level close to the equator, including at least 70 new species. This brief paper hints at the thrill of biological exploration, describes the challenges of arranging for exotic faunal collections to be studied effectively in a timely manner, and summarises current understanding of the significance of the new discoveries.

The final paper, co-authored by Eko Haryono, Sunarto Sunarto, I Made Susmayadi, Hilary Reinhart, Taufik H Purwanto, Suratman Suratman and Sutikno Sutikno, seeks to explain the morpho-chronology of the karst area in the Blambangan Peninsula in Java. Particular attention is given to the relationship between phases of uplift and its karst landform development. Morphological data were acquired from a SRTM image and panchromatic aerial photographs, supported by field surveys. The results show that three different morphologies are found in the peninsula, which resulted from events within the uplift history of the area. The three morphologies are a) conical karst hills with a corrosion plain (T1); b) upper terrace (T2) and c) lower terrace (T3). During the development of T1, the peninsula might have been a small carbonate island. The three different morphologies suggest that the peninsula must have experienced three morpho-chronological stages. The first phase was a result of uplift during the Late Pliocene or early Pleistocene, followed by a long, tectonically stable, period that occurred approximately 200–122kaBP (MIS 9–5e) when T2 was undergoing development. Alongside the T2 formation, T1 underwent severe karstification, resulting in conical karst morphology and a corrosion plain. The second developmental stage took place when T2 was uplifted (~122 ka BP), followed by the formation of T3. The carbonate island was at that time connected to the mainland of Java. Formation of the Blambangan Peninsula in its present form is likely to have occurred when T3 was uplifted (18–5 ka BP) along with the drop of sea level following the late glacial extreme and deposition of fluvio-volcanic material.

The Forum section of the volume contains a brief comment on Adam Sedgwick (by Stephen Craven), two reviews of “William Boyd Dawkins and the Victorian Science of Cave Hunting: Three Men in a Cavern” by Mark J White (reviewed by Andrew Chamberlain and Stephen Craven) and a review of “Škocjanske jame 1920–1940” by Trevor R Shaw (reviewed by Jenny Potts).