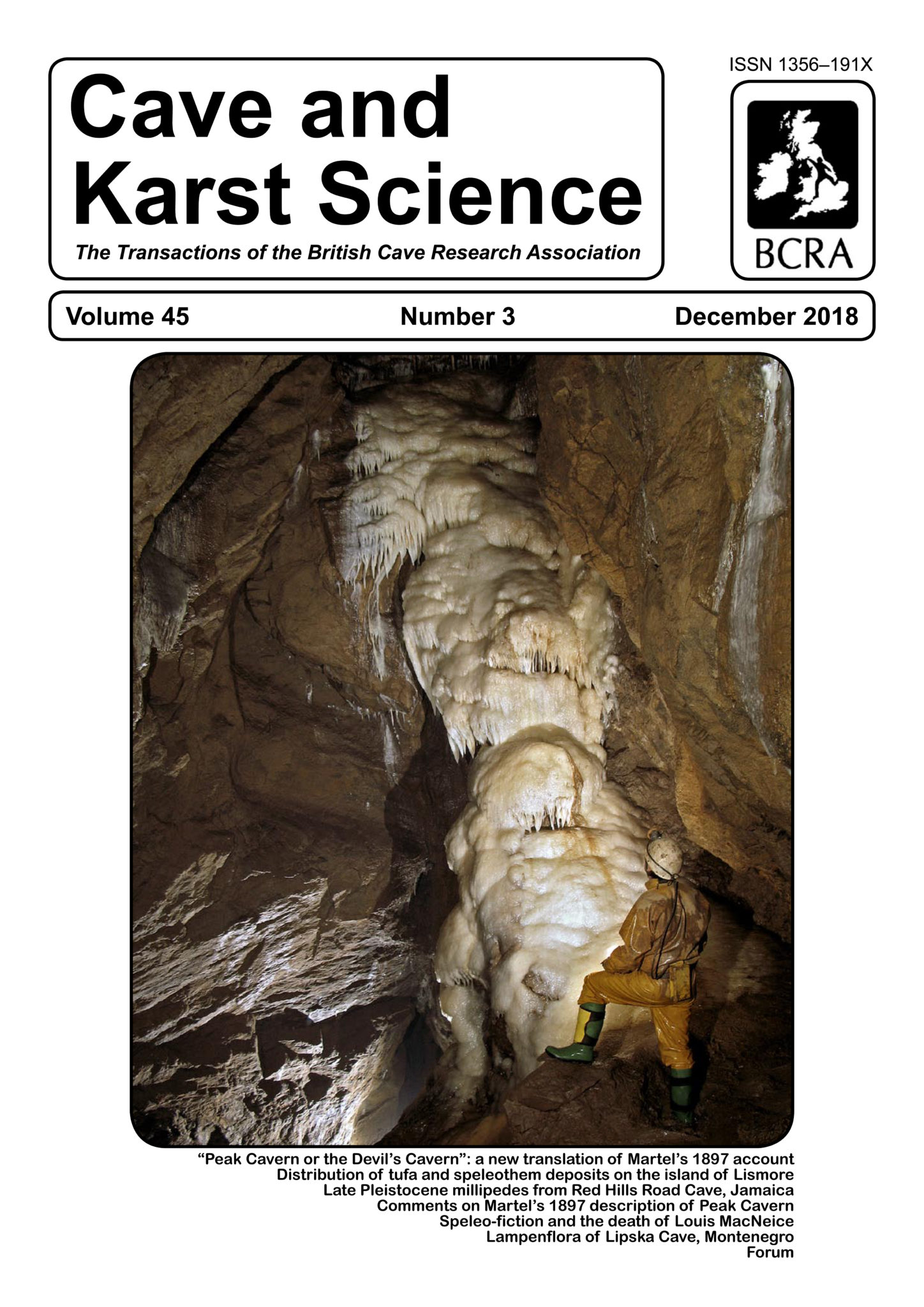 The December 2018 issue of Caves and Karst Science is now available.

Volume 45, Number 3 carries six articles. The first is a report on the distribution of deposits of cool freshwater tufa, which are ubiquitous on the calcareous island of Lismore in Loch Linnhe, Argyll. Tufa deposits are rare in Scotland but at this location they occur in several morphological varieties and locations, some being exotic and rarely reported in Britain or more widely. The paper also describes stalactites, stalagmites, flowstones or pillars at entrances and in the daylight zone of short, probably hybrid karstic / marine, littoral caves, especially on the west coast of Lismore. A single example of a deposit of calcite pearls in the open air in front of a carbonate cliff has morphological and likely genetic affinities to deposits of cave pearls.

Steve Craven has written a note entitled “Speleo-fiction: its contribution to the death of Louis MacNeice (1907–1963)“ in which he speculates that the early death of the celebrated poet, playright and radio producer may have been accelerated by the effects of immersion in an underground stream in the Yorkshire Dales.

Tony Reynolds has translated Édouard-Alfred Martel’s description of Peak Cavern, Derbyshire, a chapter from his celebrated 1897 book Irlande et Cavernes Anglaises. This is followed by a discussion of his observations written by John Gunn in the light of more recent knowledge of this cave system.

Jelle A Dercksen and Stephen K Donovan present a description of well-preserved, but fragmentary, millipedes from the Red Hills Road Cave (RHRC), Jamaica. The RHRC is about 40,000 to 25,000 years old, and is filled with unlithified sediment composed of a mixture of terra rossa and limestone clasts, making it an excellent environment for carbonate mineralization of calcitic fossils. In the present study, nine specimens have been observed by revisiting scanning electron microscopy. Observed structures include segmentation, legs, mouth parts, antennae and anal plates. Smaller external structures, such as ozopores and spiracles, have been lost under calcitic deposits. Whilst in the RHRC these millipedes were presumably exposed to unstable levels of overburden whilst covered by sediment, but this has not caused a noticeable deterioration of specimens. The quality of the preserved specimens is generally good, albeit fragmentary.

Svetlana E Mazina and Ekaterina V Kozlova have been studying the lampenflora of Lipska Cave, a showcave in Montenegro. Species were identified from 12 areas containing visible lampenflora, localized throughout the cave, and from 8 sites within the illuminated zone of the cave’s natural entrance. Relative occurrence and relative abundance were calculated for the species detected. In total 29 phototrophic species were identified, including 17 species of algae and cyanobacteria, and 12 bryophyte species. Cyanobacteria were the dominant group of phototrophs within the composition of the lampenflora communities while Entodon schleicheri and Tortella sp. had the highest abundance in the natural entrance zone. Additionally, 19 species of microfungi were identified It is presumed that the further development of lampenflora communities should proceed in line with an increase in the number of mosses.

The Forum section of the volume contains Graham Proudlove’s review of a new volume entitled the Astyanax Caves of Mexico: Cavefishes of Tamaulipas, San Luis Potosi and Guerrero by William R. Elliott and the abstracts from the very successful 29th BCRA Cave Science Symposium which was held in Bristol on 13th October 2018. The keynote paper was given by Alistair Pike on “Neanderthal cave art and the new origins of human symbolic behaviour.”