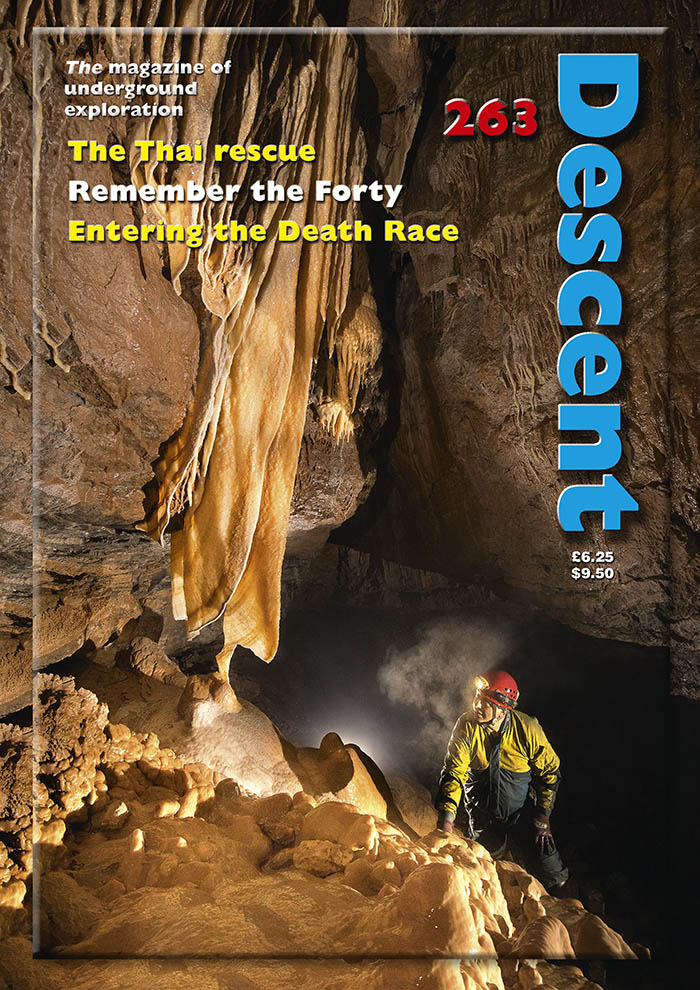 Descent 263 is now available! If you’re not already got your copy, we hope this short round up will tempt you to subscribe now, so head over to Wildplaces Publishing or if you’re lucky enough to have a caving shop anywhere near you, call in and get a one from them. As we say every time we run these articles because we genuinely think Descent is great, and we want to shout about it to the caving world! And if you or your club have a journal or newsletter you’d like us to cover so it can reach as wide an audience as possible, just get in contact and we’ll do our best to help!

Newsdesk has the usual fascinating snippets of news at home and abroad. University of Bristol Speleological Society member Dr Gina Moseley, who works at the University of Innsbrook, has been awarded a prestigious START prize worth €1.2m for her cave-based palaeoclimate work in Greenland. Closer to home, Buxton Civic Association, the owners of Poole’s Cavern, are working with the BCRA to create the British Cave Monitoring Centre, with the aim of providing a place where students can become involved with cave science and cave studies. Monitoring equipment has been installed to record temperature, relative humidity and drip rates, and additional data loggers are planned. Further south, Gary Morse is giving a lecture about the crystal caves at Naica Mine in Mexico 7.30pm on 25 September 2018 in the Natural Science Society and Museum in Bournemouth

A new study on the installation of bat gates in caves and mines has been carried out. This study suggests that in the short-term, a gate might have an adverse impact on bats but that in the longer term it will be beneficial. In other bat-related news, research in the Congo has shown a possible link between the migration patterns of bats and the spread of Ebola. Cave fauna have bee in the news again with the discovery of a new species of blind, white freshwater crab in Meghalaya, India, believed to be India’s first true troglobitic crab.

A date and a venue have now been announced for Hidden Earth 2018. This will take place on the weekend of 21 – 22 September at the Churchill Academy on Mendip. Do call in to see the nice folks at Wild Places Publishing while you’re there! BCA has published a new policy statement on caving and CRoW, reiterating its belief that the act does provide a right of access to caves. There have been several changes to key personnel at BCA, with Les Williams taking over from Andy Eavis as chair, and David Rose taking on the role of CRoW Liaison Officer from Tim Allen. A new Youth and Development committee is to be formed, and BCA are investigating the question of providing remote access to meetings. A replacement secretary for when Nick Williams steps down is still urgently being sought.

The Wealden Cave and Mine Society have obtained new radiocarbon dates on items from Chaldon Quarry in Surrey, suggesting that the passages concerned might have been sealed off during the 16th century, a later date than was expected.

News from around the regions looks first at Mendip, where the 10 year anniversary of the death of caver and digger Tony Jarratt is being marked by an appeal for information on the amount of new cave passage discovered on Mendip and in Scotland, two areas that JRat was passionate about. If you have found any new cave passage at all in these areas during the past decade, please contact Estelle Sandford with details. This year’s JRat’s Digging Awards will be held at the Hunter’s Lodge Inn on Saturday 24 November. Send all claims to Martin Grass. After the fitting of a new gate and the removal of the fixed entrance ladder, Hunter’s Lodge Inn Sink has reopened. The cave was closed following vandalism in 2016. Work to repair as many of the damaged formations as possible has been undertaken and the cave has been re-taped. A new connection passage has been dug open in Wookey Hole linking Charon’s Rift with Cooper’s Chamber and as part of the ‘Wild Wookey’ caving experience, the more intrepid visitors can now leave the cave on a zip wire! There’s also a new herd of animatronic dinosaurs to see in the valley. The results of the Mendip Cave Photography Competition are included, with a double success for photographer Pete Glanvill whose photo of Stuart Findlay in Devil’s Elbow in GB won the judge’s award for People in Caving, while Nick Chipchase’s photo of Pete won the popular vote in the same category. Mendip Cave Rescue Warden Nigel Taylor has retired after 43 years of service to the organisation.

In news from the Peak District, the lower section of the ladder at The Bung in Speedwell Cavern has been repaired and replaced. There’s a report on the success of an ambitious project to collect and compile electronic survey data for the region’s main northern catchments with the master file now holding over 58m of cave recorded in 3D. P-anchor replacement has taken place in James Hall’s Over Engine Mine after a report of a loose anchor was received, and construction work at the top of the shaft at Longcliffe Mine has mostly been completed. A commemoration meeting to remember Dr Trevor Ford OBE was held in June ad subsequently family and friends gathered at Treak Cliff Cavern to scatter some of Trevor’s ashes, with some also going into Speedwell Cavern the following day.

A packed two-page spread brings news from the Forest of Dean, featuring filming and climbing at Otter Hole, the recovery of a drone from a 10m tall tower beside the Sharpness Canal, rescue training at the Westington Mine near Chipping Campden, and further work on the Forest cave and mine registry. In news from the North, there’s a report on the roadside dig at Slab Pot which arose out of flooding problems near the crossroads at the bottom of Bullpot Farm lane and a note on a rescue call out at Lost John’s.

Across the Irish Sea, there have some unexpected new discoveries in Dromore Woods to the north of Ennis. None of the caves are very long but there is an impressively large collapsed rift. Cave diver Michal Marek has set a new Irish depth record has at -113m in Pollatoomary in Co. May. Don’t forget that this year’s Irish caving symposium will be taking place at The Burren Storehouse in Lisdoonvarna over the weekend of 26 – 29 October.

In Wales, the problems relating to the illegal Twll Du entrance to Ogof Draenen continue. Cadw, the Welsh Government’s historic environment service, remain adamant that the hole will be closed, but there are concerns that a possible shortfall in grant funding could leave the landowner footing the bill for an illegal act by cavers. In brighter news, building on the success of Cavefest on Mendip, dates have been announced for South Wales Cavefest, which will be taking place from 24 – 27 August in Crickhowell.

For mine enthusiasts there is news that the ore-bearing view has been reached in Northern Ireland’s only gold mine and shares in the mining company jumped up in price as a result. The proceedings of the Welsh Mines Society’s conference have been released in a new publication called The Fascination that is in all Mining and copies are now available for purchase. This edition of Descent also contains a report on the recent NAMHO conference held in the Forest of Dean.

The main features start with a five-page spread on the Tresviso Caves Project in Spain’s Picos de Europa region looking at the highs and lows of recent exploration in the area. This is followed by four pages on the story that gripped the world in late June/early July: the seemingly impossible but ultimately successful rescue of 12 children and their football coach from the cave of Tham Luang in Thailand after they became trapped by flood water. There’s also a report on the recent Gaping Gill winch meet, two pages of International News, and some Mendip memories from Pete Glanvill on the 50th anniversary of the 1968 flood which washed away the Forty Foot Pot in Swildon’s Hole. With the holiday season in full swing, Martyn Farr writes about his visit to the intriguing cave diving sites on Kefalonia, the largest of the Ionian islands on Greece’s western seaboard.

The front cover features a stunning shot of Paul Fairman in Manor Farm Swallet on Mendip taken by Bill Nix and the back cover showcases Dave Watt’s impressive photo of Aleksandra Ciesielka and Mike Thomas at the Bridge in G.B. Cave, which was a runner up image in the Mendip Cave Photography competition.

Every issue of Descent is a testament to the hard work put in by the editorial team to bring you all the latest caving news and stories from around the world, always working against the clock, as demonstrated by the up-to-date coverage of the Thai cave rescue. Descent is excellent value for money and copies can be obtained from Wildplaces Publishing here. Get your copy every time it appears by taking out a subscription and be sure to check that yours is up to date!