In 1833, a survey was carried out of Bleadon Cavern by John Heel but was, in all likelihood, drawn up by William Beard who had been investigating the area from 1828. This survey was first mentioned in more recent times by Chris Richards in the Wessex Cave Club Journal No 142 in August 1972 in an article entitled, “Hutton Cavern: A Reconsideration in the Light of Recent Discoveries”. The survey itself was first published in the Belfry Bulletin No 496 April 1998 by Dave Irwin and Chris Richards – “The Bleadon and Hutton Caverns, West Mendip; a Re-assessment.”

One of the more intriguing elements of the survey was a missing passage, which headed approximately south, originating somewhere near the present main entrance and ending rather intriguingly at the edge of the map. Here it broadened out, suggesting a widening of the passage and the possibility of more cave beyond. The hunt was on.

In May 2018, digging began at the base of the seven-metre entrance shaft of Bleadon Cavern, once free-climbable but now thankfully accessed by two ladders, but this initially proved unsuccessful.

From November until May, Bleadon Cavern is closed to protect hibernating bats so a dig began in the four-metre deep entrance rift. A great deal of spoil was removed, dropping the floor approximately six feet below the gated block house and revealing some excellent examples of shot holes, perhaps some of the finest on Mendip. When the bedrock was reached in the floor it was clear this was not the location of the entrance to the missing passage.

In May 2019, digging began again at the base of the entrance shaft as this, after a rethink, seemed the most likely location for the entrance into Beard’s lost passage. After several sessions, which revealed a clay pipe and over 70 bones, a low arch was reached and void could be seen beyond. On May 9th 2019 the missing passage was entered, via a small but nicely decorated chamber, filling in another piece of the puzzle.

Although not matching exactly the extant survey from 1833 it was clear this had to be the lost section of cave. It was promptly named Beard’s Passage. Disappointingly it closed down to a tight tube, just wide enough to crawl along into a very small cramped chamber so, as yet, no extension, as the map had suggested.

The new discovery is roughly T-shaped with walls that are well-scalloped, dipping approximately towards the north-west. There are two miners’ walls one of which is quite high and has to be negotiated to reach the rest of the extension. In the north-west corner a dig has started following a low choked passage from which a cool draught issues. It is clear Bleadon Cavern and indeed the whole site has much more to reveal. 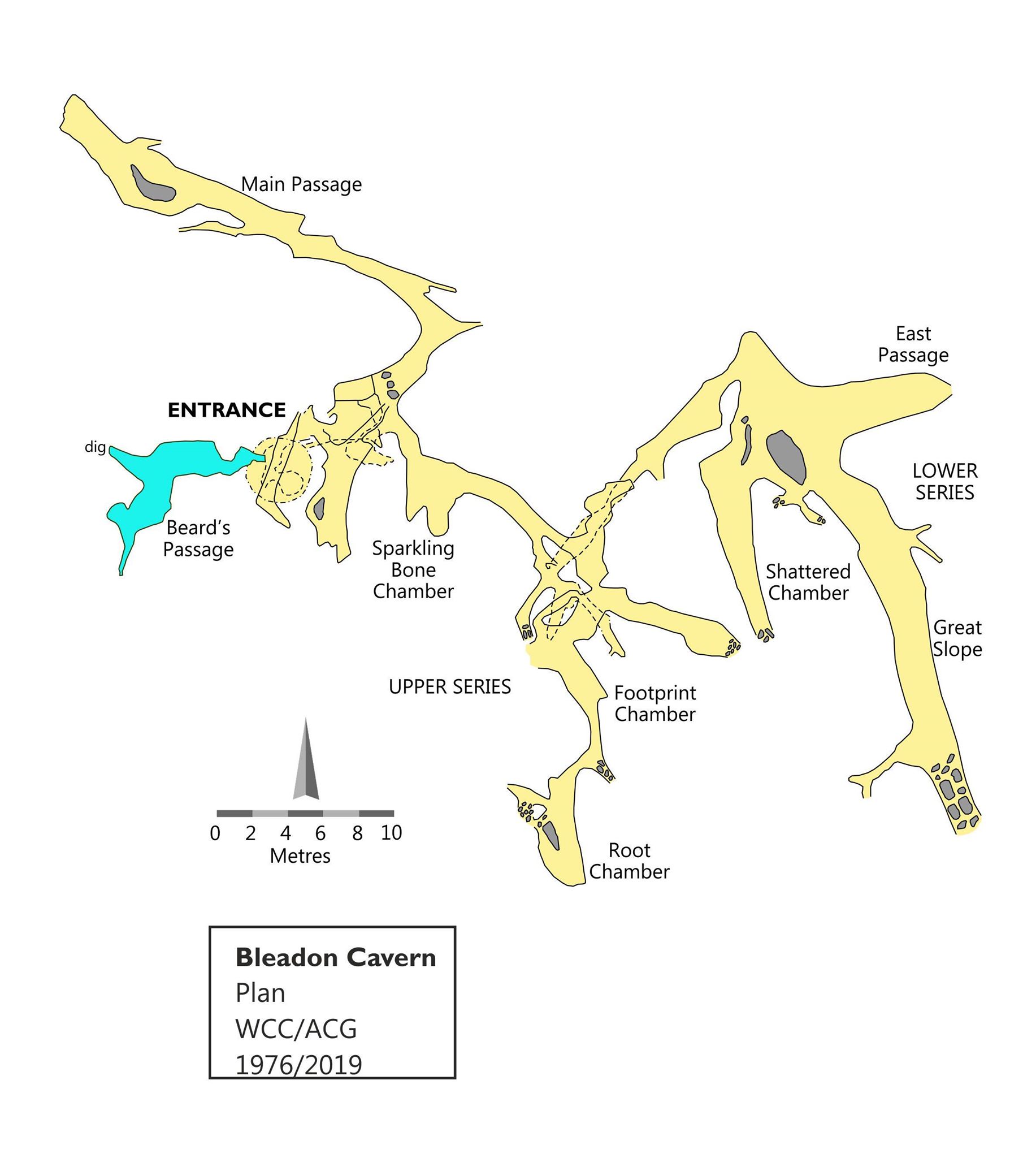