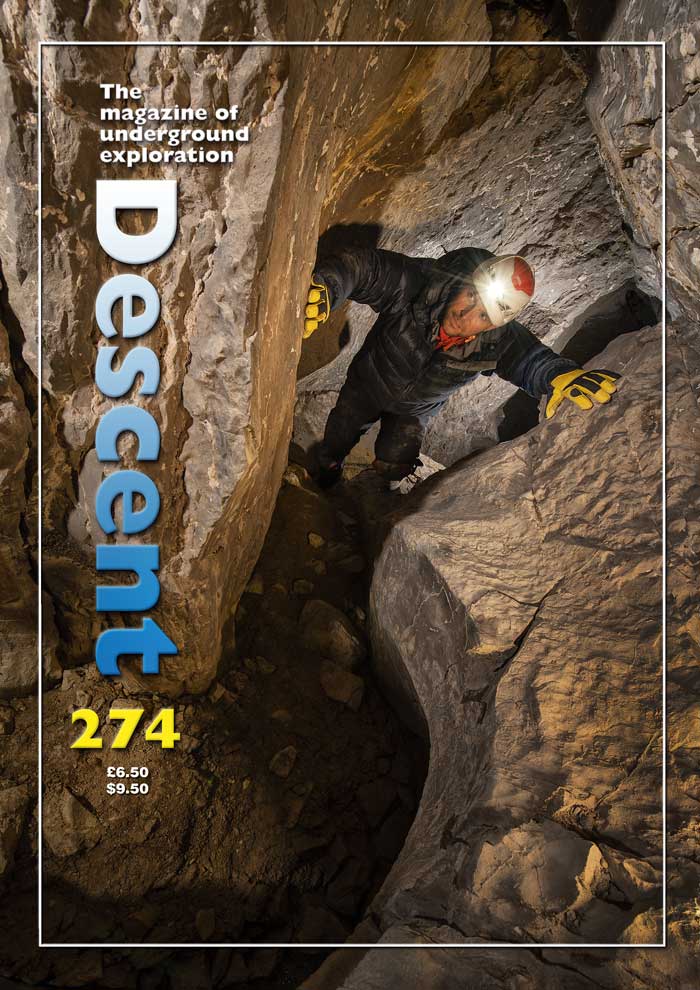 Descent 274 has now arrived! This is the second copy to appear since lockdown so as can be imagined recent exploration doesn’t figure highly but nevertheless Chris and Judith have put together a readable and informative issue.

Newsdesk has had to go to Mars to speculate on new cave discoveries – otherwise it is largely focussed on Covid-19 and highlighting various responses, including that of the BCA and some highly informative webinars put together by Hazel Barton for the NSS, but also sadly noting the passing of Graham Stevens to the disease. A full appreciation of Graham appears later in the issue. Is it a sign of things to come that the only piece of new exploration mentioned in Newsdesk was carried out by autonomous drone, not by cavers? This was a deep (over 200m) dive in Dragon’s Breath Cave, northern Namibia.

News North describes how diving at Malham Cove was hindered by the heavy rainfall in February and then, when the weather did improve, the divers had to stay at home. Surely the spring diving conditions would have rated as the best for many years had the divers only been able to take advantage. From the Peak District comes a report  of interesting new finds in Intake Dale Mine, with more to be found, it seems.

Scottish News includes a survey and brief description of new finds in Uamh na h-Aiseirigh and an appreciation of Jim Salvona who has died aged 92 after an active caving career spanning well over 70 years. In International News there is a two-page report of the highly successful Shepton Mallet CC expedition to Thailand, a happy hunting ground of theirs for some years.

The first of the main articles is a discussion of the relative merits of the Alpine Butterfly and Caver’s Butterfly knots. In short, Bob Mehew says use the former and avoid the latter. Next comes a seven-page spread by Gina Moseley and Chris Blakeley describing the 2019 expedition to Grottedalen in north-eastern Greenland, which was a huge success. The highly readable account is also very well illustrated by Robbie Shone’s photography.

Howard Jones and Colin Boothroyd pay tribute to Dave Checkley, the highly respected caver who over many years contributed so much and who sadly died in February. Amongst other things Dave was president and later chairman of BCRA. The next article describes how BCRA has partnered with Buxton Civic Association in supporting the British Cave Science Centre at Poole’s Cavern in Buxton. Researchers at the centre are beginning to produce interesting results and to build a high-quality baseline data set on which new research can be built. One interesting and topical side-effect is illustrated, a graph which shows how the Covid-19 shutdown has affected the baseline temperature in the cave.

Andrew Atkinson has written a detailed, though as he admits possibly not exhaustive, account of how UK copyright law applies to cave surveys and cave survey data. This is a complex area and Andrew’s research should give food for thought to those who have been involved in some of our more complex cave survey projects. As he rightly points out, it is best practice to set out the clear situation at the beginning of a project and preferably in writing.

Mobile phones with cameras are now a ubiquitous feature of just about everybody’s life. Award-winning cave photographer Dave Bunnell describes how one of them, Google’s Pixel with Night Sight, can be used to produce very good quality underground results, judging from the examples reproduced with the article. It did leave me wondering what sort of mobile phone signal Robbie Shone might have had in Greenland.

Matters of cave access can, as we all know, become very contentious, but few of us have gone as far as Simon Brooks who has bought his own. Simon is now the proud owner of Bradwell Parish Quarry, including Bradwell Parish Cave, and is hoping to tempt members of his club to restart digging there – providing of course that they do not make a mess or upset the landowner!

The issue wraps up with some short book reviews and letters and Nick Chipchase’s reminiscences on the beginning of his caving career back in the 1960s.

Descent is always a great read and this issue is no exception. Descent is produced by cavers for cavers and is excellent value for money. Copies can be obtained from Wild Places Publishing. Take out a subscription now and if you already have one, check that yours is up to date. In these strange times, when we cannot easily go caving, it is important to keep in contact with what is going on. Equally it is important to support those caving businesses that we all rely on.