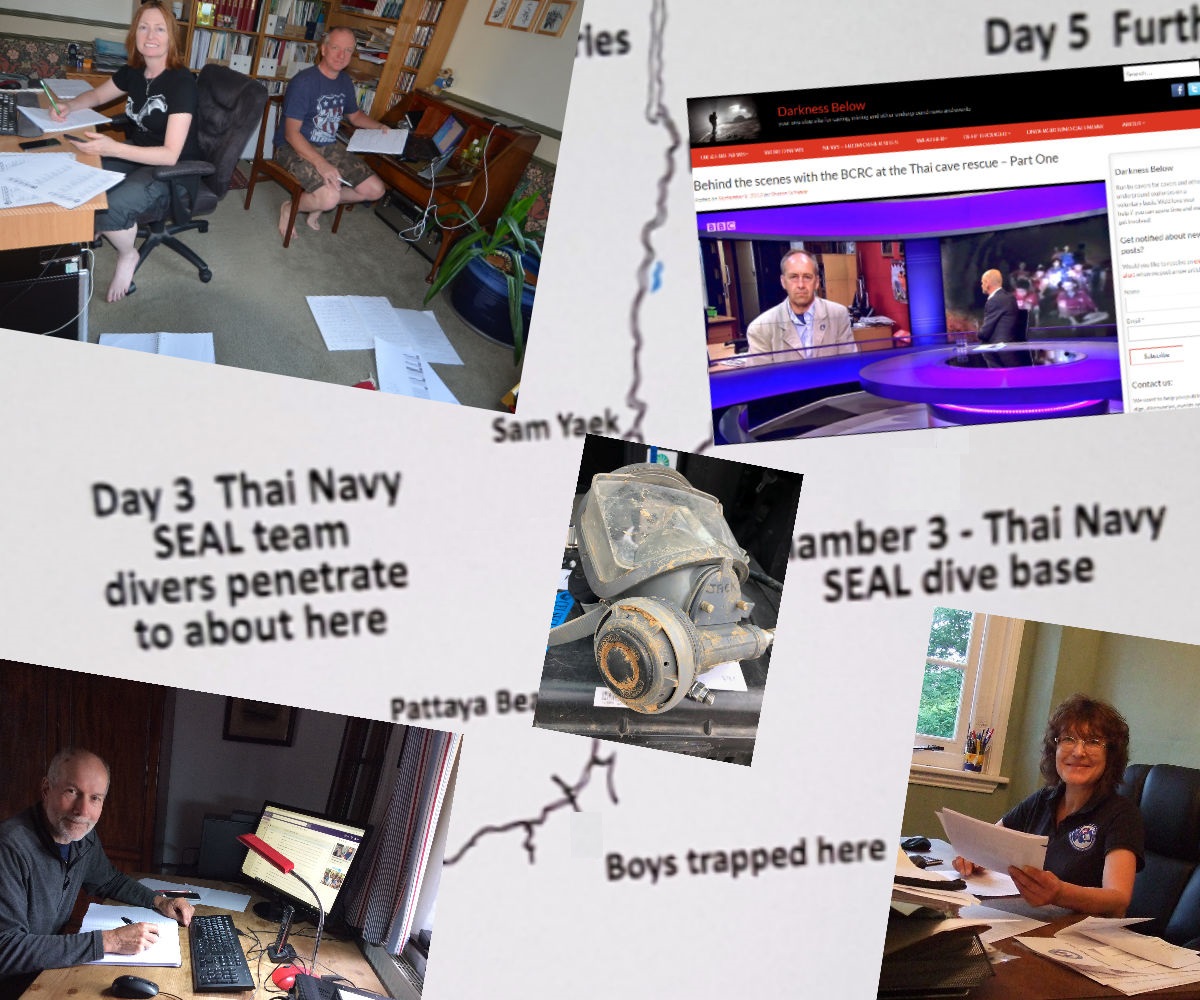 British cavers suddenly found themselves on the front pages of the world’s media through the Thai cave rescue drama. Journalist Sharon Wheeler takes a look at some of the issues raised by the coverage over the past few months.

Summer is known in the media as the silly season for a good reason. Schools and colleges are closed, people are off on their hols, and decent news stories are often in short supply. So a classic feel-good adventure story starring a bunch of modest heroes and a group of kids will have had every editor down on their knees offering up thanks to a deity they probably don’t believe in. Take a look at The Guardian’s round-up of international front pages if you still need proof of how big this story was.

A radio journalist mate of mine had a theory about international news finding its way into the UK media: one death in the UK = three in France = ten in the US = 50 in China = 100 in Thailand. Of course international stories require a British interest to really pique the media’s attention (and no, I’m not being cynical). And that’s what they got in this story. Any death is too many, but in this case the 12 trapped young footballers and their coach were rescued safely, but retired Thai navy diver Saman Kunan lost his life in the run-up to the rescue.

People are nosy, hence why the personal matters in journalism and reporters are told to come back with names, ages, addresses, occupations, marital status and inside leg measurement … This explains the emphasis on the people taking part and the media trying to track down as much information as they could on the divers. The best The Guardian could manage was a fairly sketchy piece focusing on how the UK crew are among the best in the world. And the Washington Post offered as much information as they could find on the UK contingent. So it wasn’t surprising that the media trawled every caving website in the country in search of contact details for the divers. And it proved the perils of having an unusual surname, which is why John Volanthen’s mother was tracked down easily.

One of the first ports of call for the mainstream media when they’re faced with an issue they know little about is to scour the specialist media for information and background material. Sadly, some aren’t too fussy about giving credit where it’s due – at least the Daily Telegraph had the good manners to do so when they found our stories on Darkness Below about the team behind the rescue and then the revelation at Hidden Earth that Rick and John had rescued four Thai water company workers before they’d got anywhere near the missing lads.  And the media will call in anyone they can find who appears to be an expert on the subject. We know already, thanks to Darkness Below’s exclusive feature, that the tiny British Cave Rescue Council found themselves inundated with interview requests. And the Daily Express tracked down British caver and former BCA chair Andy Eavis to provide a perspective on the dangers faced by the rescuers. ITV did the usual media digging around on websites, Facebook and LinkedIn to come up with some pretty sketchy profiles of the divers – so if you don’t want to be found easily, lock your social media profiles down!

One of the snags encountered with blanket media coverage is that errors proliferate. Rick Stanton featured both as a serving Coventry firefighter and as a retired one. He’s actually the latter – something that could have been checked by a quick phonecall to the West Midlands Fire Service’s press office. It’s bound to happen to a certain extent, given the media couldn’t access the leading players while the rescue was taking place, although the BBC did a reasonable job of finding legitimate people to interview. So the race was on to make sure there were interviews almost as soon as they set foot outside of the cave. There was a press conference at Heathrow where most of the main players were introduced to the media, and details of the rescue started to emerge. Rick, Jason Mallinson and Chris Jewell then appeared on ITV’s This Morning. And an interview with Chris on 5 News revealed some of the risks behind the rescue. John took the line of least resistance, did an interview with BBC Points West and then headed back to work and his beloved cave diving – although there was a nice story in September when he was spotted receiving the Bronze Cross, the Scouts’ top award (he’s a scout leader in north Somerset).

Once the main story had disappeared off the front pages, there were a number of rather off-beat pieces using the Thai rescue as a peg. The BBC somehow shoehorned it into a story about a rescued sheep in Wales – well, the five rescuers are South and Mid Wales colleagues of John and Co … And even the United Nations got in on the act, calling for a ‘no one left behind’ approach that was so exemplified by the Tham Luang rescue.

We saw plenty of backgrounders with graphics explaining the complexity of the rescue, including this one in The Guardian. But an angle I’m rather fond of, but which almost all the media seemed to ignore, was the fact that many of the divers involved are in their late 40s and 50s (Rick’s 57, Jason’s 50 and John’s 47, for a start). Whether you view caving as a sport or a pastime, this story proves that performing at an elite level isn’t just the domain of the 20-somethings. I know I’d rather be fished out of a cave by a bloke (or woman) with stacks of experience, rather than a kid who’s been up (or down) Mendip once or twice … The Sunday Times did wish Hollywood luck, though, when it comes to casting laconic middle-aged Englishmen in the inevitable movie!

Speaking of which, the race to be the first book or film out has already started, with three books due in November alone, so expect fact and fiction to be blurred. It smacks of those true crime books about mass murderers that seemingly hit the shops before the cell door has banged shut behind the guilty party. And the American military have started early – they’re already trying to ensure they get star billing! At least two films are in the works, one of them rather bizarrely involving a faith-based production and distribution company. The piece on news website Vox raises the issue of any film being ‘whitewashed’ – the Asian (in a US sense) angle being downplayed.

How do you know, though, that you’ve really arrived when it comes to media fame? Answer: your love life ends up in the Daily Mail! I shan’t be providing a link to the story about Rick’s personal life, not least because who the hell cares? And for another thing, we don’t want to improve the Fail’s website hits. If you really must read the story, you’ll have to Google it.

Mines in Surrey : AditNow talk scheduled for March 4th - https://t.co/49MCNxu6ZK The hearthstone mines at Betchworth in Surrey will... https://t.co/F8EMaQG0EZ

h J R
Descent 278: Video, digs and the biggest cave in the world! - https://t.co/HqW1XPyunE Another excellent issue from the Descent team... https://t.co/UJukfUZ82y

h J R
Care needed in G.B. Cavern, Charterhouse on Mendip - https://t.co/ALcrpUyOnX A rockfall has been reported in GB near the waterfall ... https://t.co/6v9O45DvTS